The Brazil polyethylene terephthalate market size was valued at USD 1.37 billion in 2017. It is expected to expand at a CAGR of 4.7% during the forecast period. The upswing in the demand for the product from the beverage packaging industry in the country has contributed to the growth of the PET market. Polyethylene Terephthalate, commonly known as PET or PETE, is a non-toxic, lightweight, safe, and flexible material, which can be recycled and reused efficiently. It can also be processed up to 3 to 4 times without affecting its chemical properties.

On account of weak domestic demand, due to the economic recession faced by Brazil from 2014 to 2016, PET manufacturers witnessed a decline in product demand. Since the revival of the economy from 2017, which has been characterized by steady domestic demand, manufacturers are focusing on the expansion of their resin exports to overcome market challenges. The ongoing economic crisis in Venezuela has also adversely impacted exports from the country. The debt-ridden economy of Venezuela has insufficient access to US dollars, which has resulted in reduced imports from foreign markets. 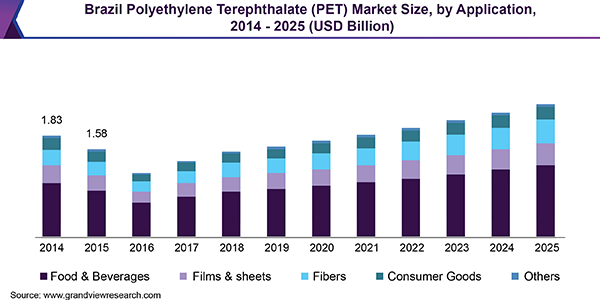 Manufacturers of PET in Brazil aim to attain optimum business growth as well as competitive market position through the adoption of various strategies such as acquisitions, new product launches, collaborations, and intensive investments in research & development related to PET. The positive growth of applications in the food & beverages and fibers segments is estimated to offer lucrative market growth opportunities to PET producers in the country.

Owing to application opportunities, the intensity of rivalry is anticipated to increase during the forecast period. Hence, players are focusing on strengthening their market position through the development of novel technologies. PET has gained considerable adoption across application segments such as food & beverage, fibers, consumer goods, and films & sheets.

Major applications of polyethylene terephthalate (PET) include food & beverages, films & sheets, consumer goods, and fibers. Among these, food & beverages were the most prominent application segment in the Brazil PET market in 2017. The segment will continue to dominate the market through 2025.

PET is mainly utilized to produce bottles for the beverage industry. It is safe for food contact and is chemically inert, which enables its extensive use in food packaging applications as well. These aforementioned factors are projected to fuel the demand for PET over the forecast period. Despite economic as well as political crises in Brazil, the food & beverage industry has been reviving since 2017.

Surging demand for high-resistance fibers to manufacture carpet textiles is supporting the growth of the overall market. Fibers manufactured from PET are poised to witness the fastest growth during the forecast period. PET fibers possess high resistance towards stretching, leading to the high initial modulus. Moreover, they are stiffer as compared to nylon fibers, which makes the former ideal for application in textiles, where high dimensional stability is needed.

In March 2018, the company agreed to acquire M&G Polimeros Brazil S.A., which is based in Ipojuca, Brazil. The capacity of the plant is 550,000 tonnes per annum and is the largest in Brazil. The strategic location of the plant offers several benefits such as close vicinity to manufacturers of PTA, which is a key feedstock in the production of PET. The strategy is likely to play a vital role in expanding the presence of the company, particularly in South American countries.

This report forecasts revenue at the country level and provides an analysis of the industry trends in each of the sub-segments from 2014 to 2025. For this study, Grand View Research has segmented the Brazil polyethylene terephthalate (PET) market report based on application: