The global canine atopic dermatitis market size was estimated at USD 911.6 million in 2019 and is expected to witness a CAGR of 9.0% during the forecast period. Increasing incidences of atopic dermatitis in dogs fueled by air pollution and allergens is the key driver for this market. The most common symptoms associated with atopic dermatitis are scratching, itching, foul odor, loss of hair, scaly skin, etc. The breeds found to be most susceptible to this canine atopic dermatitis are Golden Retriever, German Shepherd, Labrador, andPug. Rapid industrialization in the developing and developed countries is anticipated to further propel the market growth.

According to the American College of Veterinary Dermatology (ACVD) report, around 10% to 15% of dogs suffered from this canine atopic dermatitis in 2017. The x of this disease is not completely understood yet, though genetic abnormalities are reported to be one of the major reasons behind it. According to a study by the American Journal Of Veterinary Research, the risk to develop canine atopic dermatitis in golden retrievers was around 50% in the U.K. due to geographic variation, which is expected to bolster the revenue in the coming years. 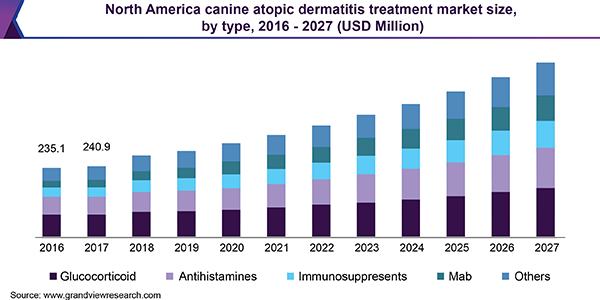 Furthermore, increasing R&D investment by the key industry players, product launches, and strong drug pipeline are also expected to contribute significantly to the market growth. For instance, Kindred Biosciences, Inc. reportedly has 4 monoclonal antibodies in their pipeline for canine atopic dermatitis, which is expected to launch in the coming five years. In 2016, Zoetis launched Cytopoint, a monoclonal antibody which became a blockbuster drug in 2018.

The rising demand for pet insurance and increasing concern among pet owners are anticipated to exhibit a positive impact on the market in the coming years. Moreover, stringent regulations by the Food and Drug Administration (FDA) and other regulatory bodies in order to reduce the off label usage of human drugs in animals is boosting the market growth.

On the basis of product, the canine atopic dermatitis treatment market is segmented into glucocorticoids, antihistamines, immunosuppressants, MAbs, and others. Glucocorticoids dominated the market in terms of revenue in 2019, owing to its increased usage and cheaper cost. Topical and oral glucocorticoids were found to be the first line of treatment for the management of canine atopic dermatitis. Oral prednisone, prednisolone, and methylprednisolone are usually preferred for the treatment of acute flares. The side effects are also minimal as compared to other dosage forms.

The Monoclonal Antibodies (MAbs) segment is expected to show lucrative growth over the forecast period. This treatment therapy is comparatively new and found to be very effective. Zoetis launched its first MAb in 2016, which is administered to the patients every four to eight weeks and is claimed to reduce itching immediately. There are more MAbs currently under clinical trials and are expected to show positive results in the coming years.

On the basis of mode of administration, the canine atopic dermatitis market is segmented into oral, topical, and injectable. The oral segment held the largest revenue share in 2019 owing to its lesser price. Moreover, it is more convenient as compared to injectable and topical modes. The dog owners can administer the drugs by themselves which is further fueling its demand.

By the distribution channel, the canine atopic dermatitis treatment market is segmented into veterinary hospitals/clinics, retail, and e-commerce. The retail segment dominated the market in 2019 owing to increased product availability. The advent of retail pharmacy chains is a major contributor to the share of the distribution channel segment. Adoption of digitalized systems in retail pharmacies to reduce risk of errors in the prescriptions is anticipated to propel the revenue growth over the coming years. Moreover, veterinarians have begun to rely on general pharmacies to fill prescriptions for drugs, which are not available in vet pharmacies, which is further propelling the market growth. 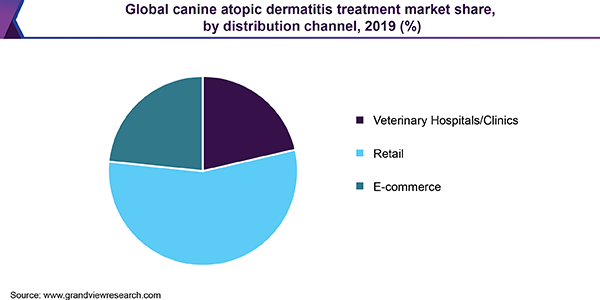 Increasing popularity of e-commerce channels is a key factor contributing to the lucrativeness of the e-commerce segment over the forecast period. The convenience to choose from websites which offer a wide range of products with detailed product description is fueling the growth. Moreover, discounts on different sites and increasing consumer preference to buy product online is expected to propel the revenue growth of this segment.

North America dominated the regional market in 2019 and is anticipated to witness the same trend over the forecast period. This growth can be attributed to the increasing incidence of canine atopic dermatitis in pet dogs, new product launches, and growing concern among pet owners. The rising pet ownership is further boosting the market growth. Furthermore, there is high investment in the development of new drugs by major players, which is expected to propel the growth over the forecast period.

Latin America held a substantial share owing to the presence of a large number of pet dogs in this region. Brazil and Argentina are among the top 10 countries having the highest number of pets in the world. Asia Pacific region is expected to show lucrative growth over the forecast period. The growing disposable income increases the probability of higher adoption of companion animals, which is further expanding the future growth prospects. Continual up-gradation of healthcare infrastructure is also presumed to present the market with high potential growth opportunities over the forecast period.

The market is consolidated in nature. Zoetis held more than 50% of the revenue share as of 2018. The two main drugs of canine atopic dermatitis namely Apoquel and Cytopoint generated sizeable revenue in 2018. With around 20% growth in 2018, these drugs are poised to represent this market with significant growth opportunities in the next few years.

Other key players in the market include Elanco, Virbac, and Toray Industries. Extensive product pipeline by some new industry players such as Kindred Biosciences, AB Science is expected to bolster the market in the coming years. Strategies such as mergers, acquisitions, regional expansion, and launch of new products are being adopted by the players to maintain their share. For instance, in February 2019, Zoetis launched its blockbuster drug Apoquel in China to gain regional revenue share.

This report forecasts revenue growth at global, regional, and country levels and provides an analysis of the latest industry trends in each of the sub-segments from 2016 to 2027. For the purpose of this study, Grand View Research has segmented the global canine atopic dermatitis market report on the basis of product, mode of administration, distribution channel, and region: