The global cannabis cultivation market size was valued at USD 323.9 billion in 2021 and is expected to expand at a compound annual growth rate (CAGR) of 21.4% from 2022 to 2030. Growing legalization and the adoption of cannabis for the treatment of chronic diseases are the key factors driving the growth of the market. In addition, the liberalization of laws related to cannabis cultivation, especially for hemp cultivation by various countries due to low THC content is further increasing its adoption. Furthermore, the legalization of marijuana in various geographies and its increasing adoption for medical purposes are factors driving the market for cannabis cultivation. For instance, as of April 2021, 35 states and the District of Columbia have legalized marijuana for medicinal purposes, alongside 16 permitting adults to utilize the substance recreationally. And that figure is certain to climb as more individuals come around to the concept of legalizing marijuana across the U.S. 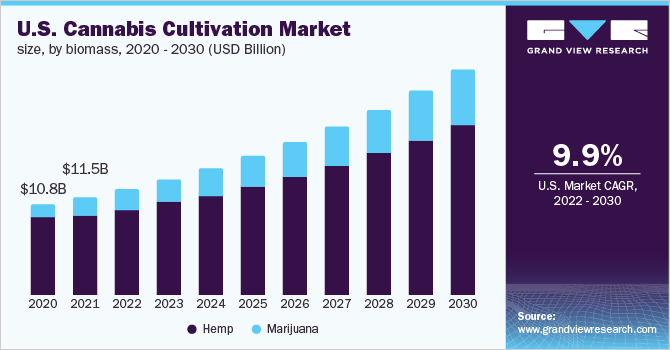 Moreover, the high demand for medical cannabis has led to a bottleneck in the supply chains in various countries. This is primarily due to a significant increase in demand and the cultivation restriction in various countries. According to research published in The Lancet in October 2021, the pandemic resulted in 53.2 million extra significant cases of depressive disorder and 76.2 million additional instances of anxiety disorders worldwide in 2020.  Moreover, research published in the Journal of Addictive Diseases in September 2020 revealed an increase in the usage of medical cannabis. The study discovered that patients with mental health issues increased their usage of medical cannabis by 91% when COVID-19 was declared a pandemic on March 11, 2020. The advent of Omicron, a new version of the coronavirus in November 2021 might keep marijuana use high among mental health patients.

In addition, the demand for hemp is rapidly growing, as many developed countries have legalized the cultivation and processing of hemp after recognizing the levels of CBD present in it, which is leading to an increased demand for hemp extracts for various applications in several sectors, including pharmaceuticals, cosmetics, nutraceuticals, and food & beverage. Hemp is regarded as an agricultural commodity produced in over 40 countries. It is a strain of cannabis Sativa, part of the genus cannabis, with THC content as low as 0.3%. Countries such as China, Canada, France, Chile, South Korea, Ecuador, Croatia, Czech Republic, Mongolia, Romania, and Russia are some of the major producers of hemp across the world.

Although medical cannabis has been legalized in various European nations  only for certain indications. For instance, in Croatia, the usage of marijuana is legal among patients suffering from AIDS, cancer, multiple sclerosis, and epilepsy. Moreover, in Queensland, Australia, medical marijuana can be only used for indications such as severe muscle spasms, chemotherapy-induced nausea & vomiting, and epilepsy with severe seizures & palliative care. This limited scope of application in several countries is likely to hinder market growth and limit cultivation. Moreover, banking will remain difficult since cannabis businesses in the U.S. are not permitted to utilize regular banking systems. The Federal Reserve's declaration on December 15, 2021, that interest rates would rise in 2022 and it will make it more difficult for marijuana firms to secure finance for future expansion.

Based on biomass, the hemp segment dominated the market for cannabis cultivation and accounted for a revenue share of around 80% in 2021. The high share is attributable to the increasing adoption of hemp and derived products and its growing acceptance among users due to its low THC content. Furthermore, marijuana is expected to be the fastest-growing segment, growing at a significant growth rate over the forecast period. This growth can be attributed to the growing legalization of marijuana in various countries for medical and adult use.

In addition, promising government reforms regarding the utilization of hemp in many countries are increasing the adoption of hemp and hemp-derived products. For instance, since doctors are prepared to prescribe marijuana for medicinal grounds, Germany has already become the largest European market for medical cannabis. Insurance reimbursements for medical cannabis were up roughly 9% year on year by the middle of 2021, exceeding USD 17 million.

In 2021, based on application, industrial consumption accounted for the highest revenue share of 73.3% in the cannabis cultivation market. This is owing to the growing application of marijuana and hemp in various industries such as pharmaceuticals, personal care and cosmetics, nutraceuticals, and food and beverages. Furthermore, factors such as the growing usage of cannabis and its derivatives as raw material by companies to produce innovative cannabis-infused products are expected to propel the growth of the market for cannabis cultivation during the forecast period.

In addition, medical consumption is expected to expand at the highest CAGR owing to the increase in the use of marijuana for medical purposes and in the treatment of varied health conditions such as chronic pain, mental disorders, cancer, etc. Furthermore, medical applications of cannabis have witnessed tremendous growth, as the number of scientific studies supporting its benefits in the treatment of various diseases is increasing. For instance, according to Prohibition Partners, 100,000 people additionally will be allowed to use medical cannabis products in Europe for the first time in 2022, increasing the total number of patients to 341,595. Therefore, as the number of countries legalizing medical marijuana is increasing, the market for cannabis cultivation is expected to witness lucrative growth in the forecast period. 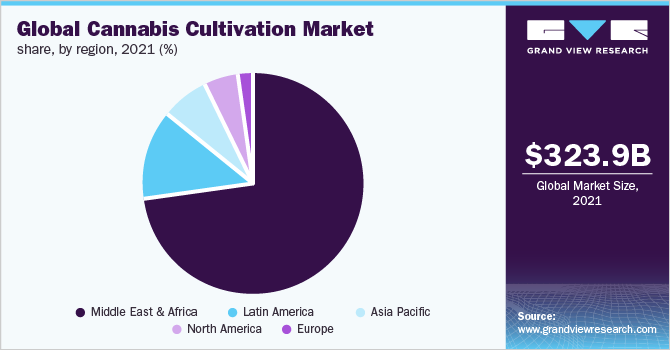 In addition, the Asia Pacific is also expected to exhibit lucrative growth in the forecast period. Increasing awareness about cannabis and its medical benefits, growing patient pool eligible for medical marijuana treatments, the presence of the largest cultivation markets in the region and favorable climatic conditions are some of the key factors fueling the market growth.

Competition is high among existing players owing to the rise in demand for cannabis and derived products coupled with technological advancements. The rising demand for cannabis cultivation is likely to promote the entry of new companies in the future, fueled by increasing acceptance and awareness regarding cannabis. For instance, In April 2022, Tilray Brands, Inc introduced Solei Bites, its Solei brand's initial foray into edibles and the first ready-to-eat THC edible. On April, 2022, Atlas Biotechnologies Inc., in collaboration with NordicCan, confirmed the debut of Atlas Thrive CBD gum, Canada's only CBD chewing gum. This product will be sold in a variety of retail venues, such as Canna Cabana, including over 100 locations across the country.

In March 2022, HEXO and Tilray Brands Collaborate to Form Strategic Alliance, Uniting Two Canadian Cannabis Industry Leaders. October 2021, Truss CBD USA, a subsidiary of HEXO Corp joint venture, reveals the introduction of Veryvell, a range of hemp-derived CBD as well as adaptogen drinks. Furthermore, strategic expansions by companies in the form of mergers and acquisitions are expected to boost the competition and propel the growth of the market for cannabis cultivation. Some of the prominent players in the global cannabis cultivation market include:

This report forecasts revenue growth at global, regional, and country levels and provides an analysis of the latest industry trends in each of the sub-segments from 2016 to 2027. For the purpose of this study, Grand View Research, Inc. has segmented the global cannabis cultivation market report based on biomass, application, and region.

How big is the cannabis cultivation market?

What is the cannabis cultivation market growth?

Which segment accounted for the largest cannabis cultivation market share?

b. Hemp biomass dominated the cannabis cultivation market with a share of 79.8% in 2021. This is attributable to the increasing adoption of hemp and derived products and its growing acceptance among users due to its low THC content.

Who are the key players in the cannabis cultivation market?

What are the factors driving the cannabis cultivation market?

b. Key factors that are driving the cannabis cultivation market growth include the legalization of cannabis for medical & recreational purposes in North America & Europe and the growing demand for marijuana-based products among patients.