The global medical marijuana market size was valued at USD 11.0 billion in 2021 and is projected to expand at a compound annual growth rate (CAGR) of 21.6% from 2022 to 2030. The market is experiencing growth due to rising awareness regarding various medical applications such as pain management, appetite enhancement, and reducing eye pressure. Medical marijuana is mainly classified into two types, namely Cannabis Sativa and Cannabis indica, which originate from the countries of the Western hemisphere and Central and South Asian regions respectively. The growing number of countries legalizing the use of medical marijuana in various parts of this world is one of the key factors driving the usage rate of cannabis in therapeutic applications. 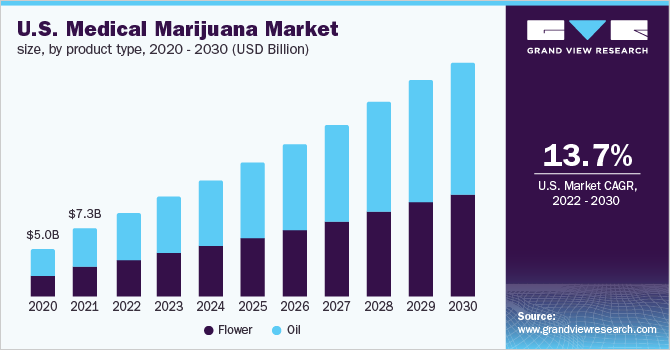 COVID-19 had a somewhat positive impact on the market, as it led to an increased usage of medical cannabis across several states in the U.S., Europe, and Canada. The lockdown imposed caused a decrease in customers buying from the offline or retail market, however, many key players in the cannabis business shifted their focus on selling and marketing products on social media and e-commerce platforms. There was a significant increase in the number of patients consuming medical marijuana across Europe and the U.S. during the pandemic. The market witnessed down growth due to ease of cannabis availability, with the approval of adult use of cannabis in states such as California, Washington, New York, and Colorado. In Alberta, the government deemed cannabis as an essential service in March 2020, as a result, the retailers, manufacturers, distributors, and warehouses saw growth in the sales of cannabis in Alberta.

The growing awareness among the healthcare industry experts, medical professionals, and patients about the benefits that medical marijuana has prompted the regulatory authorities to consider and authorize medical marijuana. Through various national initiatives, over 30 nations including the U.S., Canada, Argentina, UK, Australia, Germany, and many European countries have legalized its medical usage. It has also been approved for medicinal usage in several states around the U.S. For decades, medical marijuana has been the subject of extensive research and discussion. Multiple medications have been commercially approved by the U.S. Food and Drug Administration in the U.S. has approved various medications using marijuana-based formulations in healthcare due to its proven medical benefits.

The growing number of states legalizing medical marijuana and the increasing demand for cannabis in medical and recreational applications are some of the pivotal factors that are expected to propel the demand for medical marijuana over the coming years. The growing research and development activities are also expected to drive the demand for the drug over the forecast period. The (FDA) Food and Drug Administration in the U.S. has approved some cannabis drugs due to their medical properties: Epidiolex a drug, which contains a purified form of cannabidiol derived from the cannabis plant, is used for the treatment of seizures associated with two types of epilepsy one Lennox-Gastaut syndrome and another Dravet syndrome. Marinol and Syndros containing dronabinol are used in the treatment of symptoms such as nausea and vomiting caused by cancer chemotherapy. Cesamet containing nabilone is used to treat weight loss caused by HIV and AIDS.

The oil and tinctures segment dominated the market and accounted for the largest revenue share of 51.8% in 2021. The segment is anticipated to witness the fastest growth rate over the forecast period. Marijuana oils are preferred as they are a blend of cannabis extracts and inert carrier oils. The oils are easier to find. The tinctures are generally alcohol-based and therefore have a longer shelf life. The bitterness of tinctures is often masked with the help of additives such as sweeteners and other flavoring agents.

The chronic pain segment dominated the market and accounted for the largest revenue share of around 26.0% in 2021. Reports from various researchers state that medical cannabis is safe for treating patients with chronic pain and neuropathic pain. The growing number of clinical trials with marijuana to treat neuropathic and chronic pain is one of the key indicators, which showcases the rising usage of cannabis in pain management over the coming few years. New York’s “New Medical Marijuana Law” states that a patient certified by a healthcare professional to use medical marijuana, possessing a patient identification card registered with the New York State Department of Health is eligible to use medical marijuana for pain management. 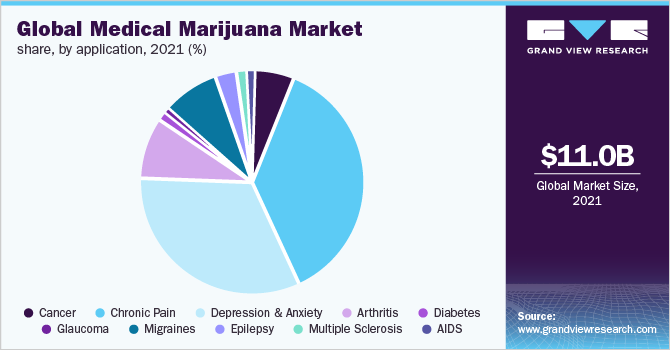 Medical marijuana has seen rapid adoption for chronic pain management and the trend would continue in coming years as well. Cannabinoids have over-shadowed the use of opioids for chronic pain management due to their ability to relive pain more effectively than opioids. It is used for chronic pain control; it eases the pain of nerves and multiple sclerosis. It is also used as a muscle relaxant to lessen tremors in Parkinson’s disease, interstitial cystitis, endometriosis, fibromyalgia, and other chronic pain. It is used to manage nausea and weight loss and is used for the treatment of glaucoma, and helps patients suffering from pain and wasting syndrome related to HIV, Crohn’s disease, and bowel syndrome.

However, cancer will be the fastest-growing application segment with a CAGR of 25.0% during the forecast period. By federal law, the usage of cannabis without a research setting is considered to be illegal. However, the rapidly growing number of states, districts, and territories enacting laws to legalize the drug is also driving its demand in cancer treatment. Various clinical trials have indicated that marijuana has displayed cancer cell destroying capabilities. However, the drug is not approved by the U.S. FDA for the treatment of cancer, which is a key restraining factor for the growth of this application segment. Moreover, the growing prevalence of cancer and increasing interest amongst researchers regarding the use of medical marijuana in cancer treatment are some of the factors responsible for driving this market over the coming years.

North America dominated the market and accounted for the largest revenue share of 76.1% in 2021. The medical use of cannabis is not yet approved in most Asian and Latin American economies. Thus, the regional scope of the market is limited to North America, Europe, and RoW. The surging pace of cannabis legalization and a rapid increase in the approval and commercialization of medical marijuana in the U.S. and Canada are one of the key factors contributing to its increased demand. The region is expected to witness growth over the forecast period with an exponential rate driven by a large population choosing medicinal cannabis as a therapeutic option.

The increased number of patients suffering from chronic diseases like Crohn’s disease and Alzheimer’s disease has also fueled the growth of medicinal marijuana sales in North America. Furthermore, many key players are taking initiatives to ensure the availability and supply of medical marijuana in the region, which is driving the medical marijuana market in North America. In the U.S., cannabis has been legalized for recreational uses in 4 states and 5 states, namely, California, Maine, Arizona, Massachusetts, and Nevada have voted for its legalization for recreational needs also. Moreover, the growing number of significant players investing in the U.S. and the Canadian market is also expected to drive the market over the forecast period.

The Canadian government’s announcement to limit the number of licenses for growers and distributors of medical marijuana will positively reinforce the growth of the large players such as Aurora Cannabis, Canopy Growth, and Aphria Inc. In July 2021, Jushi Holding Inc., a national cannabis company announced that it has acquired OhiGrow LLC, a licensed medical cannabis cultivator in Ohio. The company will supply biomass to Jushi Holdings to manufacture medical marijuana. In March 2021, four cannabis companies were acquired by Greenrose Acquisition Corp. to increase company’s position in the market. It acquired True Harvest LLC, Futureworks LLC, Theraplant LLC, and Shango Holding LLC. Some of the prominent players in the medical marijuana market include:

This report forecasts revenue growth at global, regional, and country levels and provides an analysis of the latest industry trends in each of the sub-segments from 2017 to 2030. For the purpose of this study, Grand View Research has segmented the global medical marijuana market report on the basis of product type, application, and region:

How big is the medical marijuana market?

What is the medical marijuana market growth?

Which segment accounted for the largest medical marijuana market share?

b. Chronic pain dominated the legal marijuana market with a share of 25.5% in 2021. This is attributable to the increased need for pain management across the globe coupled with a large patient pool suffering from several chronic illnesses.

Who are the key players in medical marijuana market?

What are the factors driving the medical marijuana market?

b. Key factors that are driving the legal marijuana market growth include a rise in the legalization of marijuana in various countries, and the use of cannabis for medical purposes is gaining momentum worldwide.