The global carbon black market size was estimated at USD 17.22 billion in 2018 and is projected to expand at a CAGR of 6.0% from 2019 to 2025. Rising product usage in the production of plastics is anticipated to drive the global market over the forecast period. Moreover, the rising usage of these plastics in electrical and electronic components will boost the product demand further. Carbon black is produced either by thermal decomposition or partial combustion method, which includes oil or natural gas as a feedstock. It is produced by four different processes, which are the furnace black process, channel process, and acetylene black process, and Lampblack process.

Furnace black is the most commonly used method owing to its maximum production capacity. Industrially, it is produced by the combustion of heavy petroleum products, such as coal tar and Fluid Catalytic Cracking (FCC) tar, with vegetable oil. U.S. tire industry is expected to witness a surge in demand owing to increasing automotive sales in the country. Tire manufacturers in the region are establishing new units in the vicinity of automobile production centers. Moreover, the quick adoption of advanced technologies in tire production is further expected to fuel market growth in the region. 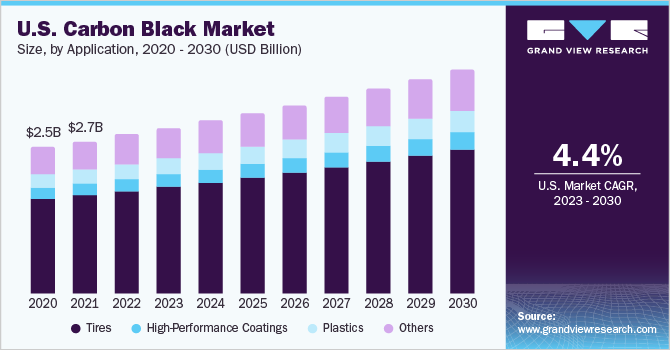 The country has also witnessed a rise in the refurbishing of automobiles, which is anticipated to propel the demand further. The refurbishing trend has resulted in increased demand for high-performance coatings in automotive as well as other industries, such as marine, aerospace, and industrial. The market dynamics are largely dependent on the usage of rubber, electronic discharge compounds, and inks along with several regulations formulated for manufacturing technologies and raw materials used. The market is also influenced by the regulatory laws by major North American and European government bodies. Within this industry, transportation is poised to be the dominant segment over the next seven years owing to the increasing demand for tire and rubber.

The product helps improve the strength and longevity of tires by providing better abrasion resistance and tensile strength. Also, growing construction and manufacturing sectors utilizing industrial rubber and equipment are anticipated to positively impact the product demand. Product prices are majorly based on raw materials, auxiliary materials, and utilities. The crude oil price fluctuation has a major impact on the pricing of carbon black. Some other macro-level factors influencing the price include working capital and pre-operational costs. The installation and setup, capitalized interests, project engineering and management, and commissioning costs are included under the pre-occupational costs.

Tires emerged as the leading application segment in 2018. The product is widely used in tire manufacturing by adding it to rubber as a strengthening agent and as a filler. It is used in carcasses, inner liners, treads, and sidewalls utilizing different types based on specific performance requirements. The plastics segment accounted for 7.0% of the overall volume in 2018. Carbon blacks are widely used for films, conductive packaging, moldings, fibers, semi-conductive cable compounds, and pipes in products, such as industrial bags, refuse sacks, stretch wraps, agriculture mulch film, and photographic containers. It is used in the production of conductive plastics as it exhibits antistatic and electrical conductivity properties.

The Asia Pacific led the global market followed by Europe and North America. Stringent environmental regulation may harm the North America and European market. However, owing to the high demand in tire manufacturing is expected to support the market. High economic growth along with rapid industrialization and urbanization in the emerging regions of Asia Pacific has boosted the regional demand for carbon black. Rising foreign investments and favorable regulatory policies are also contributing to the market growth.

The region is rapidly transforming into a manufacturing hub, which has increased the demand for the material over the past few years. Major manufacturers are shifting their manufacturing facilities to countries like India, China, and Vietnam, as they have lower labor costs and support from the respective governments. Rising automotive production is also expected to drive product demand over the forecast period. Initially, the chemical was exported to developing countries like China, but with a rise in their production capacities, the exports have reduced. 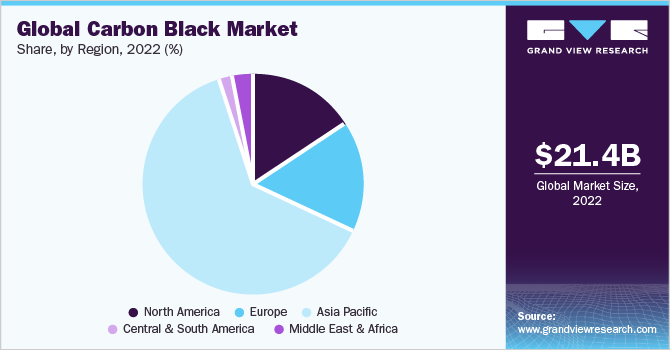 North America market is dominated by the U.S., both in terms of product consumption as well as production. The demand for tires in North America has increased with a rise in the number of tires being replaced every year. Moreover, constant recovery of ongoing construction and automobiles industries giving rise to the demand for paints, coatings, and non-tire rubber will drive the market further. Plastics manufactured from carbon black are lightweight and thus help reduce carbon emission and fuel consumption.

Some of the key manufacturers and suppliers in the market include Evonik Industries AG, Nippon, Mitsubishi Motors Corp., Jiangxi Black Cat Carbon Black Co. Ltd., Phillips Carbon Black, and China Synthetic Rubber Corp. Most of these industry participants focus on increasing production capacities and the development of new and sustainable technologies to produce carbon black. For instance, Cabot Corp. has set up manufacturing units in developing countries of Asia for faster and cheaper production. Collaborations with raw material suppliers and end-use manufacturers will help industry participants to gain significant market share over the forecast period.

This report forecasts revenue and volume growth at global, regional, and country levels and provides an analysis of the latest industry trends in each of the sub-segments from 2014 to 2025. For this study, Grand View Research has segmented the global carbon black market report based on application and region: