The global carbon capture and storage market size was valued at USD 3.22 billion in 2021 and is expected to expand at a compound annual growth rate (CAGR) of 5.8 % from 2022 to 2030. Increasing concerns regarding the detrimental effect of carbon emissions on the environment have prompted the adoption of carbon capture and storage (CCS) technology. Various governments are encouraging the implementation of technology through pilot projects across various industries due to the ability of carbon capture & storage technology to serve as a large-scale solution for achieving the high CO2 emission reduction targets and climate control goals. 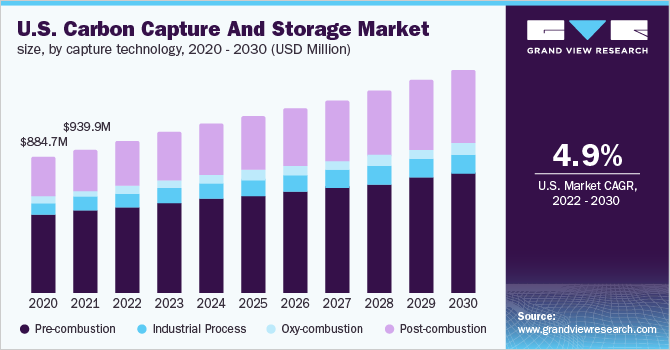 As technology advances, offshore oil and gas exploration and production activities are projected to expand, resulting in a surge in the use of gas injection enhanced oil recovery (EOR) techniques. Carbon dioxide is used in the extraction of crude oil. The use of gas injection EOR techniques for both onshore and offshore wells will be fueled by maturing and declining oil reservoirs. As a result, the market for carbon capture and storage is likely to develop over the forecast period due to the growing need for CO2 for EOR activities in the oil and gas industry.

In 2021, the U.S. generated USD 939.52 in terms of revenue. The region is anticipated to dominate the global market on account of the presence of several high-capacity CCS plants in this region, as well as the increasing usage of CO2 in enhanced oil recovery techniques. Due to large-scale development projects of carbon capture, utilization, and storage, the demand in the region is predicted to increase rapidly in contrast to other regions.

According to the American Council, the FUTURE Act (Furthering Capital Carbon Capture, Utilization, Technology, Underground Storage, and Reduced Emissions) was introduced under the 45Q part of the bill to give incentives for capturing the carbon dioxide produced by industrial and power sources for use in enhanced oil recovery. With the development of shale gas technology and the new government's lack of interest in carbon capture, the market for CCUS is predicted to increase at a slow rate in the country, increasing North America's market share in the carbon capture and storage market.

The pre-combustion capture technologies constituted the largest share accounting for over 54.77% in 2021 and are anticipated to witness considerable growth over the forecast period. Pre-combustion CO2 capture utilizing water gas shift reaction and removal with acid gas removal (AGR) process is currently being commercially practiced globally. The advantage of using this capture technology under pressure is that it incurs less of an energy penalty, i.e., approximately 20% than current PCC technology (approx. 30%) at 90% CO2 capture.

The post-combustion capture technology is anticipated to grow at the highest CAGR of 6.4% from 2021 to 2030. Increased energy generation, newly developed advanced amine systems, and heat integration systems are expected to be the main factors driving its demand over the forecast period.

The power generation segment accounted for the largest revenue share of more than 40% in 2021. Coal-fired power plants are the most dominant emitters of carbon dioxide. Due to imposed restrictions on power plants, the utilization of CCS facilities has become mandatory to reduce carbon emissions up to the required standards. Adoption of these technologies is essential, to potentially permit the continued use of coal resources for power generation, whilst reducing CO2 emissions. Moreover, CCS facilities can be retrofitted to the existing power plants without hampering their efficiency. Due to these factors, the adoption of CCS technologies in the power generation industry is anticipated to grow over the forecast period.

The market is anticipated to have a steady growth in the medical segment. Carbon dioxide is used in surgeries, such as arthroscopy laparoscopy, and endoscopy, to stabilize body cavities and enlarge the surgical surface area. It is also used to maintain the cryotherapy temperatures of approximately -76-degree Celsius. Carbon dioxide gas grades are used in other application segments such as rubber, firefighting, wastewater treatment, fertilizer production, electronics manufacturing, and industrial cleaning.

Post-combustion technologies are easily implemented to capture CO2 from flue gases escaping from the sinter plant, flue gas exiting the lime kiln, stove, coke oven plant, basic oxygen furnace, and blast furnace. On account of a wide range of CCS applications at various stages in metal production industry, the market is expected to grow at a significant pace over the forecast period. 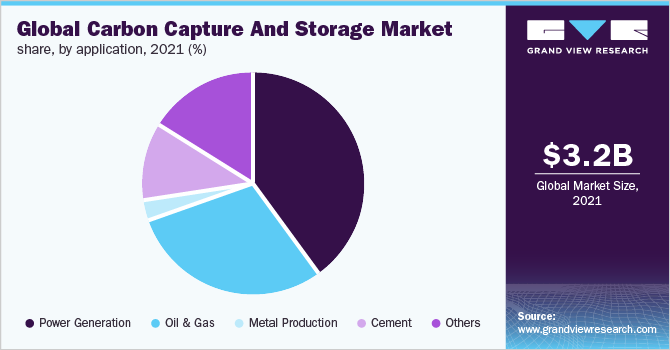 Carbon dioxide is increasingly being used for crop growth enhancement inside closed greenhouses; as well as applications in the fields, for growth enhancement. It is commonly used compressed gases for pneumatic systems (pressurized gas) in portable pressure tools that are ubiquitous in the construction industry. Carbon dioxide is also used to create dry ice pellets which can be used to replace sandblasting for removing paint from surfaces.

North America accounted for the largest revenue share of over 36.6%. It dominated the market for carbon capture & storage, owing to the increasing demand from the oil & gas sector coupled with stringent government regulations to reduce carbon emissions, and the trend is expected to continue over the forecast period. Canada accounts for the second-largest share of the CCS market in the region. The first-ever CCS project in Canada was operational in 2000 by Cenovus Energy in Weyburn and Midale oil fields. The pre-combustion method of carbon capture was utilized in this project. Further, large-scale CCS projects are under construction in Canada which will be operational in the forecast period.

In terms of revenue, Europe accounted for the second-largest share of 27.9% in the global market in 2021. These support mechanisms of the European Union have the aim to enhance the development of commercial-scale CCS projects in the region and to accelerate R&D activities for technologies related to carbon capture and carbon storage in the region.

The market is characterized by the presence of several key players and a few medium and small-scale regional players. Many of the companies have their own sector that they focus on and have a very high penetration in that sector. For instance, in January 2019, Aker Solutions secured a contract for a carbon capture and storage project, which was initiated by Equinor in partnership with Shell and Total, to develop the world’s first storage facility capable of receiving CO2 from various industrial sources. The project, known as The Northern Lights project, consists of CO2 receiving terminal, an offshore pipeline, injection, and CO2 storage. Some of the prominent players operating in the global carbon capture and storage market are:

This report forecasts revenue growth at global, regional, and country levels and provides an analysis of the latest industry trends in each of the sub-segments from 2019 to 2030. For this study, Grand View Research has segmented the global carbon capture and storage market report based on capture technology, application, and region:

Who are the key players in carbon capture and storage market?

What are the factors driving the carbon capture and storage market?

b. Key factors driving the growth of the carbon capture and storage market include increasing the application of enhanced oil recovery (EOR) technologies and increasing emissions of carbon dioxide globally.

How big is the carbon capture and storage market?

What is the carbon capture and storage market growth?

Which segment accounted for the largest carbon capture and storage market share?

b. Pre-combustion capture technologies for carbon dioxide constituted the largest share accounting for over 55.0% in 2021. Increased energy generation, newly developed advanced amine systems and heat integration systems are expected to be the main factors driving its demand over the forecast period.