The global carbon disulfide market size was valued at USD 136.9 million in 2019 and is projected to expand at a compound annual growth rate (CAGR) of 2.4% by 2025 owing to exponential growth in the demand for cellophane from the packaging industry. Increasing demand for fertilizers in developing countries is also a key growth driver. Carbon disulfide (CS2) is a toxic, colorless, and highly flammable chemical. It is a crucial raw material required to manufacture products such as carbon tetrachloride, cellophane, viscose rayon, and fertilizers. 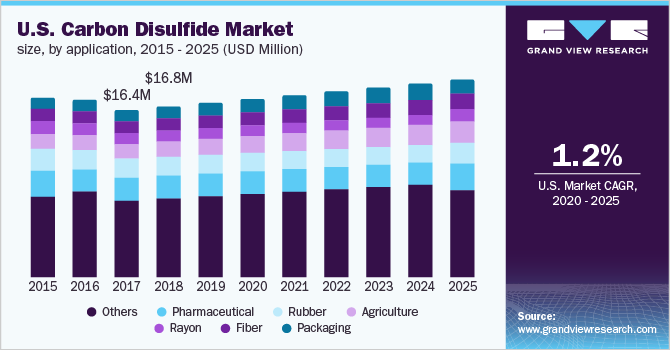 Traces of carbon disulfide are found in nature, released to the surface of the earth from over marshes or volcanic eruptions. Micro-organisms found in soil also produce gases containing CS2. Commercially, carbon disulfide is produced through a reaction between carbon and sulfur at an extremely high temperature. Currently, viscose rayon is the largest application of carbon disulfide, followed closely by the rubber manufacturing and fertilizer manufacturing industry. Cellophane is also a major application of CS2 and is used in packaging applications across various verticals, from food and beverages to automotive ancillaries.

Developed economies are expected to witness greater demand for carbon disulfide, owing to growth in global agricultural produce. According to the United Nations, in 2016, Belgium was the largest importer of CS2, with a reported import of over 34.57 million kilograms.

However, stringent government regulations owing to adverse health effects associated with carbon disulfide are forcing manufacturers to explore alternatives for the compound. This is threatening to slow down the growth rate of the market for carbon disulfide over the forecast period.

As a substance that makes up most of the plant cell walls, cellulose is abundantly available organic compound on the Earth. It is a type of polysaccharide plant fiber. Some of the food that plants make during the process of photosynthesis is converted into cellulose, which functions as the major building material for the plant. Thus, cellulose can be regarded as environment-friendly, versatile, cost-effective, and biodegradable.

Rising demand for cellulose as well as cellulose fibers from a wide array of industries is projected to boost the market growth over the foreseeable future. When cellulose obtained from sources such as wood, plants or cotton is dissolved with alkali and carbon di sulphide, it results in a transparent material known as cellophane, which is employed in various industries. One of the key applications of cellulose is in packaging industry in the form of products such as papers, boards, cellophane, and molded cellulose.

In agricultural segment, the major application of carbon di sulphide is in the manufacturing of dithiocarbamates, which are used as fungicides, biocides, and fumigants. The major compound produced is metam sodium (N-methyldithiocarbamate), which is primarily used in soil fumigation and sterilization. It is produced due to the reaction of methyl methacrylate (MMA), carbon di sulphide, and caustic, which are used in home and garden uses for potatoes and tomatoes.

The acute effects of carbon di sulphide on the human health as well as the environment have led to the initiation of various government regulations to reduce the incidence of threat. This remains a key restraint for the market growth and may continue to hinder the growth over the coming years. Organizations such as OSHA aim at regulating the levels of carbon di sulphide in the workplace by limiting the emissions.

The rubber application segment is anticipated to cross USD 15.0 million in 2025. Carbon disulfide has been used as an accelerator in the rubber vulcanization process since the late 19th century, making it one of the oldest and most important application of the compound. 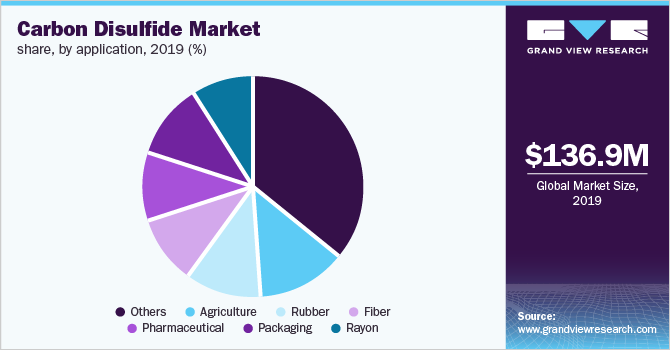 The packaging segment is projected to witness significant growth owing to an exponential increase in the adoption of cellophane in the industry. Fiber is expected to be the fastest growing application over the forecast period. Carbon disulfide is a vital raw material in the textile industry and is used extensively as a catalyst in the production of fibers. Carbon disulfide is also used extensively in the production of fertilizers.

Asia Pacific dominated the Carbon Disulfide market and accounted for the largest revenue share of 35.3% in 2019. The region is anticipated to continue its dominance over the forecast period. Rayon applications of the carbon disulfide market witnessed large-scale adoption from 1930 onwards, especially in the European and Asia Pacific region.

China and Australia hold a major share at the country level. China manufactures the largest volume of packaging material in the world and is therefore the biggest market for cellophane. Favorable legislations and government policies have boosted the market in the country.

Packaging is the fastest growing segment for North America carbon disulfide market in terms of application in 2016. The U.S. is now a major market for cellophane, after a slump in the previous decade. This was owing to government regulations to reduce the adoption of the compound, especially in fertilizers.Additionally, the expansion of packaging industry in North America has been underway for several years. Production and use of cellophane is among the fastest growing sector with countries including the U.S. has witnessed significant growth in the last five years. 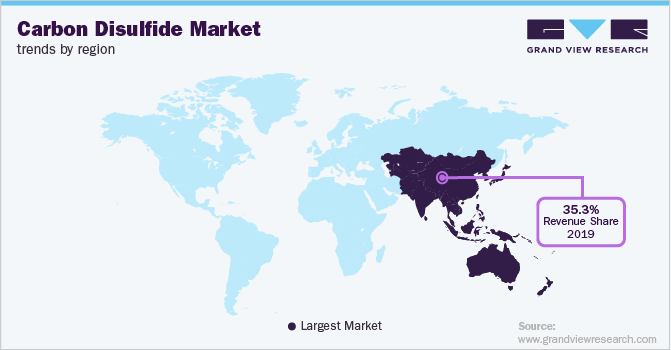 In 2016, Europe emerged as the second-largest region by revenue. The region is witnessing large-scale import activity of carbon disulfide along with significant adoption in the rubber business. This is projected to boost market growth over the forecast period.Europe has traditionally been the global cloth-manufacturing hub, and is therefore the leading consumer of carbon disulfide. Asia Pacific, led by China, also made considerable inroads in the fiber production, and is predicted to become the market leader over the forecast period. Most of the major manufacturers are concentrated in Europe, although Chinese companies are catching up with competitive pricing and technologies. A wide range of innovative technologies and products are anticipated to drive the European carbon disulfide market over the forecast period.

Carbon disulfide is a by-product and is therefore produced by various large-scale chemical companies for internal use. It is also a vital raw material in the production of carbon tetrachloride, which finds applications ranging from cleaning solutions to fire extinguishers.

This report forecasts revenue growth at global, regional, and country levels and provides an analysis on the latest industry trends and opportunities in each of the sub-segments from 2014 to 2025. For the purpose of this study, Grand View Research has segmented the global carbon disulfide market report on the basis of application and region: 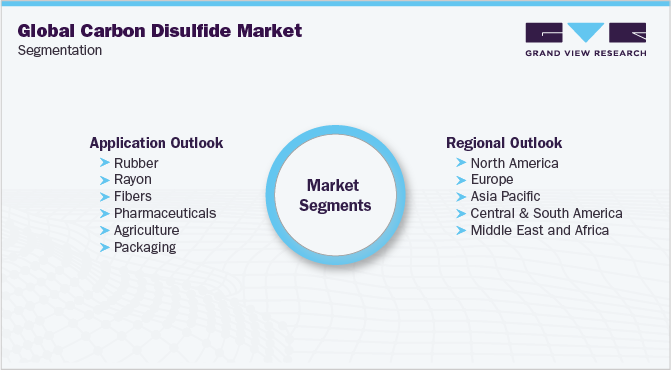