The global cardiac catheters & guidewires market was valued at USD 12.98 billion in 2021 and is expected to expand at a compound annual growth rate (CAGR) of 7.56% from 2022 to 2030. The industry growth is attributed to technological advancements, initiatives by various governments & organizations, and the rising incidence of chronic diseases. COVID-19 had a negative impact on the industry. As a result of COVID-19 emergency cases, hospitals were forced to free up capacity and resources for potential patients, resulting in a considerable decrease in the number of routine & elective procedures, such as cardiac catheterization procedural volume. 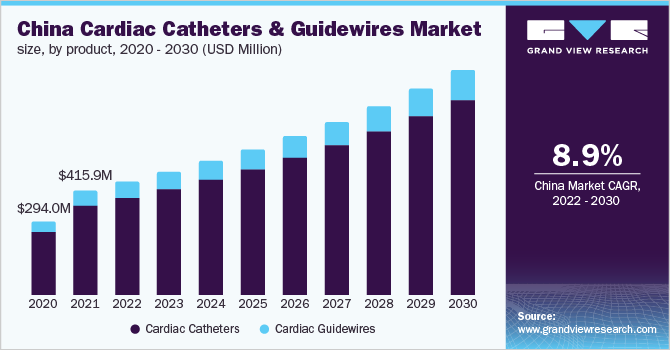 According to the National Center for Biotechnology Information, in 2021, both coronary angiography and Percutaneous Coronary Intervention (PCI) volumes decreased by 64% in April 2020 compared to April 2019. However, the industry is likely to witness significant growth during the forecast period due to the high prevalence of chronic diseases, increased demand for improved healthcare systems among the geriatric population, the presence of well-established healthcare facilities, and technological advancements. For instance, in January 2021 Medical Manufacturing Technologies—an Arcline investment management portfolio company that provides medical device manufacturing solutions—integrated Biomerics’ R&D Engineering to its automation technologies and catheter manufacturing, which is expected to propel industry growth.

The increasing prevalence of chronic diseases across the globe is likely to boost the demand for cardiac catheters & guidewires. For instance, According to FrontPublic Health in 2020, chronic Non-communicable Diseases (NCDs) account for about 80% of mortality in China among adults aged 60 years, with Ischemic Heart Disease, Stroke, Chronic Obstructive Pulmonary Disease (COPD), and Type 2 Diabetes being the most common. Moreover, according to a report published by the CDC in 2021, in the U.S., heart disease is a leading cause of death in both the genders and members of the majority of racial & ethnic groups. Moreover, CVD claims 1 life every 34 seconds in the U.S.

In addition, as per a similar source, in 2020, 697,000 people in the U.S. died as a result of heart disease, i.e., 1 in every 5 deaths. As per a report published by the World Atlas, Russia has the highest prevalence of Cardiovascular Diseases (CVDs), and around 57.0% of the mortality in the country is due to CVDs. As a result, it is projected that rising CVD cases globally will increase the demand for angioplasty, cardiac catheterization, and PCI. Cardiac catheters and guidewires are two necessities for these treatments. To unblock the coronary arteries, a cardiac catheter is introduced during PCI, for instance, a thin catheter with a deflated balloon tip is also introduced through the arm into the artery during balloon angioplasty.

The catheter tip is then put through the constricted location after being advanced through the artery until it reaches the occluded coronary artery. The balloon is inflated after being inserted into the constricted space to lessen the obstruction. The balloon is flattened and the catheter is removed when the blockage has been reduced. Moreover, the industry players undertake this strategy to strengthen their product portfolios and offer diverse technologically advanced, and innovative products. It is the most prominently adopted strategy by companies to attract more customers. For instance, in February 2022, the U.S. FDA approved an additional indication for the use of Teleflex’s specialized catheters and coronary guidewires in crossing chronic complete occlusion percutaneous coronary procedures, according to the company (CTO PCI).

The growing interest in difficult PCI patients about the development of specialized equipment and treatment methods is another important factor that will propel industry expansion in the near future. The industry is also being driven by the development of specific devices and treatment methods for patients who would otherwise undergo Coronary Artery Bypass Graft surgery (CABG) or be managed medically. For instance, in June 2021, Medtronic launched a new-generation drug-coated balloon catheter “Prevail” in the European market for the treatment of CAD. Prevail DCB is used during PCI operations to treat blocked or restricted coronary arteries in people with CAD. The regional players are also making continuous efforts to launch new, technologically advanced products and maintain their industry position.

Similarly, in the case of angioplasty and other interventional procedures, the insertion of a catheter is the initial step of these procedures. The increasing cases of cardiovascular diseases across the globe are one of the major factors contributing to the segment's growth. For instance, as per the report published by the World Heart Federation in 2018, 80.0% of the deaths in low- to middle-income countries are caused due to cardiovascular diseases. Similarly, as per the World Health Organization (WHO) in 2018, around 17.9 million deaths occur globally due to CVDs.

Therefore, such factors are anticipated to propel the demand for cardiac catheterization, angioplasty, and other interventional procedures, which, in turn, boost the demand for cardiac catheters. Moreover, currently, no substitutes for cardiac catheters are available in the market, which is also a major driving factor for the segment's growth. Recently, the market for cardiovascular catheters has witnessed notable industry events, which are expected to significantly increase product demand during the forecast period. For instance, in April 2019, Oscor, Inc., a U.S.-based implantable devices manufacturer, announced a strategic alliance with Micro Interventional Devices, Inc. (MID) to commercialize minimally invasive annuloplasty technology.

The hospital segment dominated the global industry in 2021 with a revenue share of over 40.85% due to the high incidence of cardiovascular diseases across the globe. For instance, as per the report published by the Centers for Disease Control & Prevention (CDC) in 2018, coronary heart disease is the most common type of cardiovascular disease and more than 370,000 people die every year in the U.S. due to it. It also reported that every year, around 735,000 Americans have a heart attack. Angioplasty, PCI, and cardiac catheterization are majorly recommended for the treatment of such problems, thus, an increase in cases of such diseases is expected to boost the hospital admission rate. 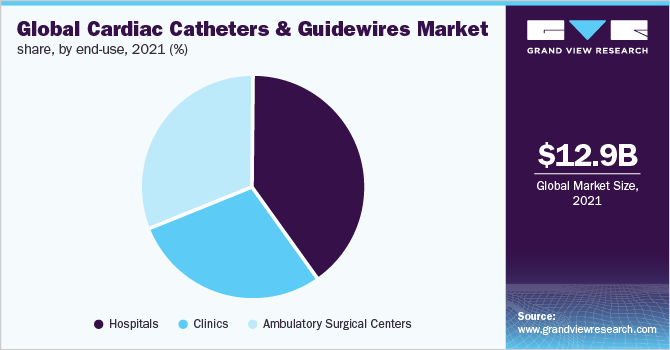 In addition, the rising number of hospitals across the globe is also anticipated to support the segment growth over the forecast period. For instance, as per the report published by the American Hospital Association in 2019, there were around 6,210 hospitals in the U.S. in 2018, of which 2,968 are nongovernment not-for-profit community hospitals and 972 are state and local government community hospitals. The Ambulatory Surgical Centers (ASCs) segment is expected to register the highest CAGR during the forecast period. Ambulatory surgery facilities sometimes referred to as outpatient surgery centers, are frequently chosen by patients having less involved surgeries that only need a brief hospital stay.

Rapid healing is possible with minimally invasive interventional techniques, which also have a short hospital stay. Thus, patients opting for such procedures generally prefer to choose ASCs. For instance, Percutaneous Transluminal Coronary Angioplasty (PTCA) and Percutaneous Transluminal Angioplasty (PTA) are minimally invasive interventional procedures, which allows rapid healing, and the patients can get back to their normal life within a short period. Currently, the demand for minimally invasive procedures is increasing across the globe owing to its several advantages, which, in turn, boost the demand for ASCs.

North America dominated the global industry with a revenue share of over 45.40% in 2021. This can be attributed to several factors, such as increased adoption of cardiac catheters and guidewire technology in primary care settings, improved accessibility, and high healthcare spending in countries with efficient reimbursement policies. Technological innovations and the growing incidence of chronic conditions are anticipated to further propel the region’s growth. The increasing incidence of chronic diseases in this region, such as cardiovascular disorders, has created a high demand for imaging analysis. For instance, according to the CDC, each year, around 805,000 people in the U.S. suffer from a heart attack. The region is expected to maintain its dominance throughout the forecast period. 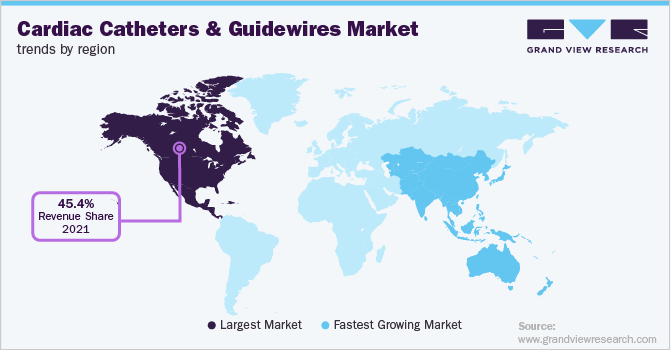 Moreover, the annual per capita healthcare expenditure in the U.S. is the highest in the world (USD 11,172, on average, in 2018), with healthcare costs growing between 4.2% and 5.8% annually over the past five years. This is likely to propel regional market growth. Asia Pacific is expected to register the fastest CAGR during the forecast period. The rising prevalence of cardiac diseases has created a demand for cardiac catheters & guidewires equipment in APAC countries. Furthermore, with some of the highest diabetes rates in the world, India and China have been the most afflicted countries. Diabetes claimed the lives of about 1.5 million people in 2019, according to WHO estimates. The population of ASEAN countries is expected to reach 693,000 by 2025. According to the British Medical Journal, the incidence rate of diabetes and cardiovascular disease would likely reach 20% by 2025.

The industry players are adopting various strategies, such as mergers & acquisitions, partnerships, and product launches to strengthen their strong foothold in the market. Moreover, key companies are investing heavily in research and development to launch new, innovative, and technologically advanced products. For instance, in November 2019, Terumo Medical Corp. acquired Aortica Corp. with an aim to strengthen the personalized vascular therapy business segment. This may increase the industry share of the company. In May 2019, to aid in complicated coronary cases, Medtronic introduced the Telescope Guide Extension Catheter. Access to distal lesions and additional backup support is made possible by this product. This may expand the customer base and industry share of the company. Some prominent players in the global cardiac catheters & guidewires market include:

This report forecasts revenue growth at global, regional, and country levels and provides an analysis of the latest industry trends in each of the sub-segments from 2018 to 2030. For this study, Grand View Research has segmented the global cardiac catheters & guidewires market based on product, end-use, and region: 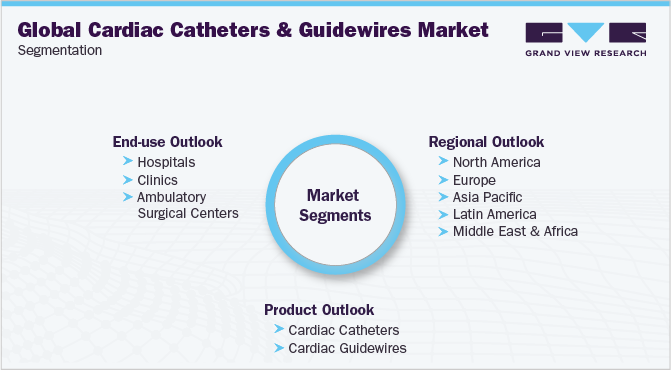 How big is the cardiac catheters & guidewires market?

What is the cardiac catheters & guidewires market growth?

b. North America dominated the cardiac catheters & guidewires market with a share of 45.41% in 2021. This is attributable to rising healthcare awareness coupled with constant research and development initiatives.

Who are the key players in the cardiac catheters & guidewires market?

What are the factors driving the cardiac catheters & guidewires market?

b. Key factors that are driving the market growth include the rising prevalence of cardiovascular diseases (CVDs), favorable reimbursement policies for coronary intervention procedures, rising incidence of diabetes across the globe, and launch of new product lines in the market.