The global cargo bicycles market size was valued at USD 1,838.3 million in 2021 and is expected to expand at a compound annual growth rate (CAGR) of 22.3% from 2022 to 2030. Increased demand for fleets for freight delivery, coupled with the need for environmentally safe transport alternatives, has propelled the demand for cargo bikes in urban areas. Logistics and transportation are integral to implementing seamless freight deliveries and simplifying deliveries in an urban infrastructure across the world. An increase in freight deliveries and the movement of goods has impacted the environment by aggravating pollution, noise, traffic congestion, and vibration. These circumstances have interrupted the inhabitants of cities globally. To mitigate the concerns mentioned above and ensure sustainable transport practices, high demand for cargo bikes has been witnessed worldwide. 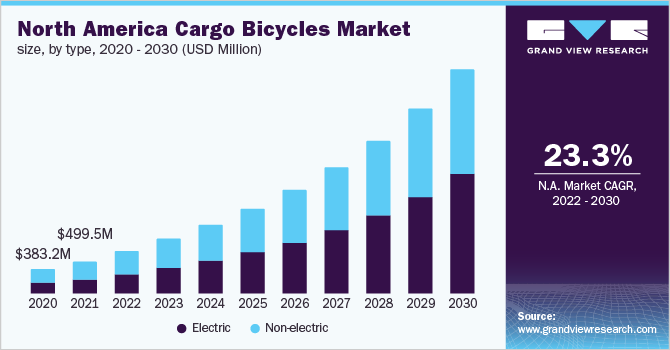 These bikes are an eco-friendly alternative to traditional means of transportation used for last-mile deliveries and general logistic services. They can significantly replace freight delivery trips and impact the urban distribution system by offering low-cost, environment-friendly solutions to cater to the delivery demands of small-surface stores and the HORECA (hotel, restaurants, and catering) sector.

The two-wheeled cargo bicycles segment is expected to dominate the market through 2030, gaining a market share of 49.3% in 2021. The demand for these bicycles is owing to ease in maneuvering and their high adoption for last-mile deliveries and courier facilities. Some of the two-wheeled bikes are designed like regular bikes and are provided with a space between the handlebar and front wheel for carrying cargo.

The three-wheeled cargo bicycles segment is anticipated to register a significant CAGR during the forecast period. These cycles have been preferred for personal uses as they offer stability to the rider. They are more spacious and wider than a regular bicycle, designed to carry three to four children; they also feature a tilting mechanism, allowing for improved handling, stability, and steering functions.

The availability of three wheels makes it possible for the user to load and unload the freight quickly. They are highly efficient for driving on terrains, bumpy roads, and adventurous expeditions. Three-wheeled cargo bicycles can carry a maximum payload of 300kgs.

Electric cargo bicycles are anticipated to witness a CAGR of approximately 25% during the forecast period. They offer diversified, sustainable transportation options, allowing users to overcome physical limitations and support a healthy lifestyle. They can carry heavy loads and provide families with a means to commute to places with their kids. They are ideal for moving goods, freight, and parcels across large city centers, thus, minimizing fuel emissions and reducing traffic congestion.

They often reduce the environmental impact by centralizing energy production in power plants with pollution abatement systems. Electric cargo bicycles can efficiently reduce CO2 emissions and save fuel consumption in urban and densely populated areas. The market is classified into electric and non-electric cargo bicycles in terms of type.

Non-electric cargo bicycles are ideal for commuting to schools, colleges, shopping, or running errands. They are comparatively cheaper than electric cargo bicycles or bicycles with pedal assistance. One of the significant applications of these cycles can be seen in large factories and warehouses for easy commute throughout the facility.

The bicycle’s cargo box can carry tools, allowing workers and employees to travel across the facility comfortably. Other applications of non-electric cargo bicycles include small business deliveries and running errands for buying household equipment, furniture, heavy tools, and cleaning equipment.

The 20"- 24”-wheel size segment dominated the market in 2021, gaining a market share of around 31%, whereas the below 20"-wheel size segment is anticipated to propel the market growth, registering a notable CAGR during the forecast period. The wheel size depends on the design of the cargo bicycles and the distribution of load. A front loader bicycle primarily uses a 20″ wheel in the front and a 24″ wheel in the back.

Cargo bicycles with small wheels offer better maneuvering and are sturdier than other bicycles. They can be driven on terrains and allow users to operate the bicycle at faster speeds. However, they tend to create minimal friction with the surface due to their small size. Hence, it is difficult to operate and control in slippery or wet conditions. In terms of wheel size, the market is classified into below 20", 20"-24", 25"-28", and above 28" cargo bicycles.

The 25"-28" wheel size segment is estimated to surpass the other segments in the overall cargo bicycles market share by 2030, registering a notable growth during the forecast period. Since the wheels are broader, more air can disperse over the obstacles, offering the user a smoother and more comfortable ride.

The above 28" cargo bicycle is the latest segment invented. The larger diameter of these wheels increases rolling resistance and ground contact, enabling users to maintain stability at high speeds or on rough terrains. However, a few drawbacks of this large diameter include inefficient agility, maneuverability, and less torque while driving. Thus, the adoption of the above 28"-wheel size segment is comparatively low than other wheel sizes.

The personal application segment is expected to advance at a faster CAGR of 23.4% during the forecast period. The factors influencing the growth of the personal segment include rising concerns regarding a healthy lifestyle, sustainable transportation, and accessibility of cargo bicycles. Individuals can use them to commute to schools, colleges, and offices, and these do not require a license to operate and thus can be used by any individual. It is easier to ride and can carry heavy loads or children. Furthermore, they are environment-friendly and expected to replace cars for daily chores and activities over manageable distances. 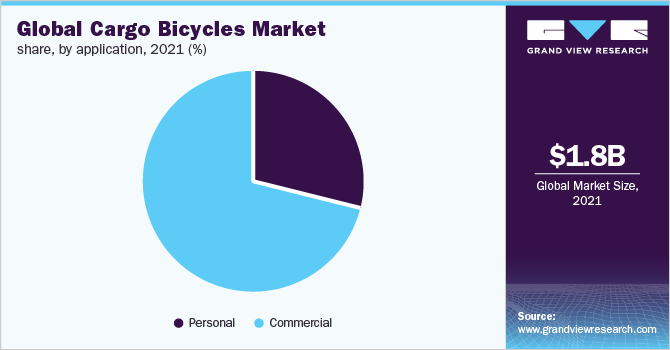 The market is classified into personal and commercial segments, in terms of application. The commercial segment dominated the market in 2021 and is expected to maintain its dominance across the forecast period. Logistics and e-commerce companies, including DHL, Amazon, and UPS, have pilot-tested cargo bicycles in New York City by launching trial programs to reduce traffic congestion across Manhattan. Additionally, the New York City Department of Transportation is focusing on evaluating the safety and viability of cargo bicycles in densely populated urban areas.

The commercial application segment is further classified into courier & parcel service, rental/custom fleets, facility maintenance, waste and municipal services, and others. The courier & parcel service and facility maintenance applications contribute to approximately 53% of the total commercial application segment share. The rapidly growing e-commerce sector, coupled with an inclination toward online food deliveries, has propelled the adoption of cargo bicycles to deliver food to individuals and households.

Europe dominated the overall market, gaining a market share of 46.5% in 2021. The region is estimated to be the leading revenue contributor in the global market throughout the forecast period. The region is home to cities that are considered ideal for bicycle commutation. Rising traffic congestion, pollution, and increasing online and last-mile deliveries have prompted their adoption in commutations over short distances.

Increasing awareness and initiatives by governments and cargo bicycle manufacturers have influenced users across commercial and private sectors. The European governments have encouraged several initiatives to boost the adoption of sustainable transportation options. The City Changer Cargo Bicycle Project in Europe aims to promote its usage, offering an eco-friendly, healthy, space-saving, and cost-efficient mode of transportation for personal and commercial applications.

Asia Pacific is likely to emerge as the second most promising region during the same period and is projected to witness a CAGR of 22.7% during the forecast period. Countries including Japan, China, and Singapore emphasize deploying the infrastructure required to encourage and support bicycle commutation. The advent of connected vehicles and modern technologies including IoT and 5G has propelled its adoption in premises for facility management, rental services, municipal services, and courier services.

AI and IoT are equipped with GPS, cellular, and sensors to track, monitor, and analyze the vehicle during delivery. Delivery companies use telematics to monitor driver behavior and ensure safety during transit. Additionally, electric cargo bikes are integrated with features such as navigation assist, remote diagnostics, speedometer call alerts, anti-theft alarm, and lock, ride statistics, voice-enabled apps, and ride behavior-based artificial intelligence suggestions to assist the rider in emergencies.

The market is anticipated to witness increased competition due to the presence of several players globally. Increasing spending on R&D activities by major players is resulting in the development of new technologies and improvements in operations of the fleet, which is expected to intensify the competition.

Several players operating globally offer cargo bicycles for personal and commercial applications. These players focus on intensifying their geographic reach by offering cargo bicycles as per demography. Major players in this market focus on research and development, strategic partnerships, and alliances with local and regional players to gain a significant market share. Some of the prominent players in the global cargo bicycles market include:

This report forecasts revenue growth at global, regional, and country levels and provides an analysis of the latest industry trends in each of the sub-segments from 2017 to 2030. For this study, Grand View Research has segmented the global cargo bicycles market report based on product, type, wheel size, application, and region.

How big is the cargo bicycles market?

What is the cargo bicycles market growth?

Which segment accounted for the largest cargo bicycles market share?

b. Europe dominated the cargo bicycles market with a share of 46.48% in 2021. This is attributable to the increasing awareness and initiatives by governments and cargo bicycle manufacturers that have influenced users across commercial and private sectors.

Who are the key players in the cargo bicycles market?

What are the factors driving the cargo bicycles market?

b. Key factors that are driving the cargo bicycles market growth include increased demand for fleets for freight delivery coupled with the need for environmentally safe transport alternatives.