The global ceiling fans market size to be valued at USD 12.5 billion by 2025 and is expected to grow at a compound annual growth rate (CAGR) of 4.3% during the forecast period. Rising spending on the premium quality home décor at the global level is expected to promote the utility of ceiling fans with added features such as layered lighting fixture and interchangeable blades. Additionally, increasing awareness regarding convenient ceiling fans is projected to play a key role in promoting the importance of technologically advanced and smart fans, which offer voice control features and connectivity access to phones and tablets. 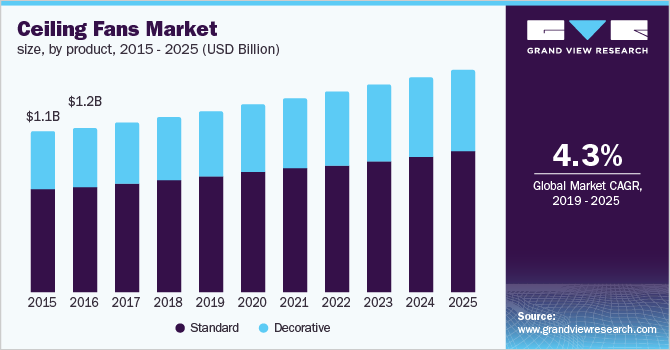 Urbanization in developing countries such as China and India is expected to play a key role in promoting the establishment of new residential buildings. Additionally, over the past few years, the private and public sector banks of these countries have been providing home loans with reduced interest rates and low down-payments.

As a result, consumers are increasingly spending on purchasing new flats and stand-alone houses. This trend of purchasing new residential flats or houses is expected to promote the use of ceiling fans over the next few years. Governments of different countries are introducing schemes to provide electricity connection to rural households.

For instance, in 2018, the government of India started an initiative to provide electricity connections to 100% of households. Additionally, the China government started providing provide shelter to the low and middle-income groups in 2018. These favorable initiatives are projected to a major role in increasing the market reach in rural households over the next few years.

Ceiling fans consume low power than air conditioning that makes them popular in the low to middle-income groups. In addition, ceiling fans possess a longer life span over air conditioners, relaying the cost advantages. Furthermore, the rise in spending on high-end home furnishings owing to the increase in disposable income is fueling demand for ceiling fans with new inventive features like smart fans which offer features like voice control, Wi-Fi connectivity, lighting fans, and replaceable blades. These are some of the major drivers bolstering the ceiling fans market growth.

Consumers spend more money on appliances that are durable and stylish. Ceiling fans with extra features such as stacked light bulbs and interchangeable blades are projected to become more popular as people spend more money on high-quality home designs in different countries. Furthermore, the rise in spending on interior decoration with different designs for home and business spaces through vigorous advertising on social media platforms is anticipated to further boost the market growth for ceiling fan.

However, the competition among key players and presence of forged electronic products are expected to hinder the market growth of the ceiling fan in the forecast period. In addition, the market is likely to be hampered by rising complexity and fluctuations in material costs. Nonetheless, to meet changing client demands, key players are substantially investing in technologically advanced products.

The standard ceiling fan was valued at USD 6.3 billion in 2018. Low price and easy availability of these ceiling fans in the individual owned stores and brand outlets are expected to remain favorable factors for the segment growth. Furthermore, these products are considered to be safe, easy to clean, and convenient to use.

The decorative ceiling fan is expected to expand at the fastest CAGR of 4.8% from the period of 2019 to 2025. Growing spending on interior decorations as a result of increasing awareness regarding various designs for the house as well as commercial interiors through extensive campaigns on social media channels including Facebook, Pinterest, and Instagram is expected to have a positive impact on the segment growth. Companies are providing innovatively designed ceiling fans to enhance the interior appeal of households. In the urban areas, few companies are offering customized designed ceiling fans with 3 and 4 blades.

Medium fan size variants generated a revenue of USD 7.1 billion in 2018. Consumers prefer to purchase these size variants due to easy access of these ceiling fans in brick and mortar stores. These products provide better air circulation power, which drives consumers to purchase this product. Furthermore, they can provide cooling at a low velocity. Factors such as easy to install and affordability offered by these ceiling fans are expected to remain favorable for the segment growth in the upcoming years.

The residential application segment emerged as the largest segment and generated a revenue of USD 7.3 billion in 2018. The segment is driven by increasing government initiatives on household electrification in the residential sector, majorly in developing countries including India and China. Rapidly changing temperature, coupled with the requirement of air circulation, is also driving the segment.

The commercial application segment is expected to be the fastest-growing segment, expanding at a CAGR of 5.1% from 2019 to 2025. The segment is driven by a rise in demand for continuous air circulations in offices to maintain a cool environment among employees. Growing demand for ceiling fans with air conditions in the summertime to maintain the temperature inside offices is also a key driving factor.

In 2018, the offline channel generated a revenue of USD 7.2 billion. These channels can provide the access to a wide range of ceiling fans from all the major companies under a single platform. Furthermore, offline channels, particularly supermarkets, offer various add-on benefits such as membership plans for the customers and attractive warranty plans to the consumers. These features play a vital role in ensuring better retention of customer relationships with offline channels. 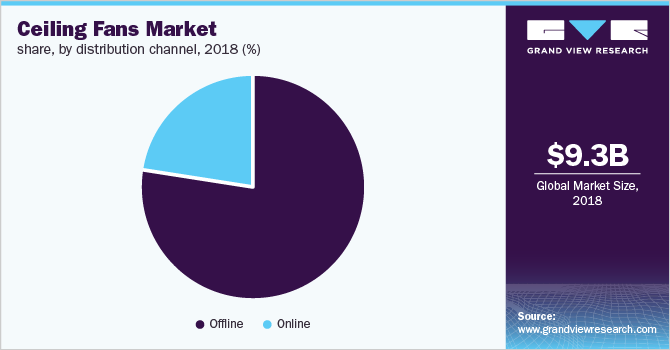 Online channel is expected to expand at the fastest CAGR of 5.1% from 2019 to 2025 as they provide consumer-friendly benefits in terms of cashback, free home delivery, and coupons. The rising number of smartphone users at the global level as a result of improved network connectivity and digitalization across various sectors is expected to expand the scope of e-commerce portals as a selling channel among the buyers. Furthermore, these channels provide the customer review on their home pages, which provides buyers’ a choice to purchase any product.

As of 2018, Asia Pacific dominated the market, accounting for 51.9% share of the global revenue. Growing middle-class population in China and India on account of improvement in urban infrastructure by implementing supportive government-sponsored schemes is expected to play a key role in launching new ceiling fans in the region. For instance, in May 2019, LG launched a smart ceiling fan with a LED display for India. This ceiling fan has features including special sleeping mode, along with an ability to operate silently using its biomechanically designed blades. 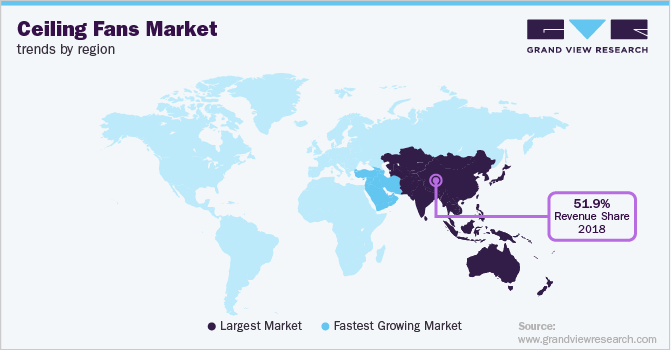 The Middle East and Africa are expected to be the fastest-growing market for ceiling fans, expanding at a CAGR of 5.1% from 2019 to 2025. Increasing awareness regarding the benefits of ceiling fans among the consumers of African countries is generating the demand for the ceiling fan. Furthermore, supportive government initiatives to provide electricity connection in rural areas in Burundi, Liberia, Niger, Malawi, and Mozambique countries will continue to generate the demand for the product in the upcoming years.

This report forecasts revenue growth at the global, regional, and country levels and provides an analysis of the latest industry trends in each of the sub-segments from 2015 to 2025. For this study, Grand View Research has segmented the global ceiling fans market report based on the product, fan size, application, distribution channel, and region: 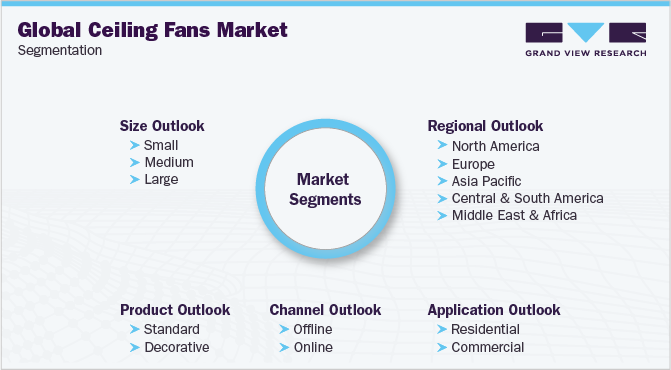 How big is the ceiling fans market?

What is the ceiling fans market growth?

Which segment accounted for the largest ceiling fans market share?

b. Asia Pacific dominated the ceiling fans market with a share of 52.0% in 2019. This is attributable to increasing product adoption among the growing middle-class population in countries such as China and India, coupled with improvements in urban infrastructure as a result of favorable government-sponsored schemes.

Who are the key players in ceiling fans market?

What are the factors driving the ceiling fans market?

b. Key factors that are driving the market growth include rising spending on premium quality home dÃ©cor products and increasing awareness regarding convenient and smart ceiling fans.