Central & South America food safety testing market size was estimated at USD 0.87 billion in 2017 and expected to register a growth of 5.7% over the forecast period. The market is anticipated to be driven by growing instances of outbreaks of foodborne diseases, leading to consumer awareness regarding safety, which will consequently drive market growth.

The rising demand for packaged eatables in the region driven by technological improvement, changing lifestyle, modern retail trades, and increased popularity of quick-service restaurants have a positive impact on market growth. In addition, innovative processing techniques for extending the shelf life of eatables is expected to drive the demand for processed food. 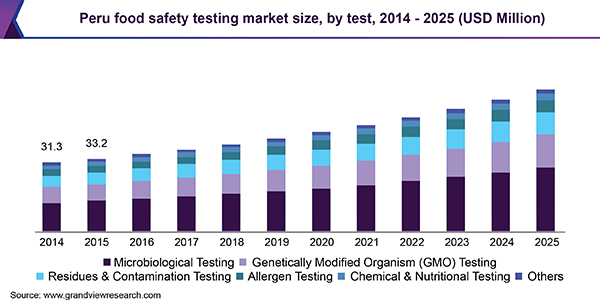 A wide range of chemical additives and preservatives used in the processing of eatables to extend the shelf life are projected to drive the demand for the chemical examination of processed food products. In addition, packaged eatables exhibit contamination due to the migration of chemicals from packaging materials which is further expected to increase the need for food testing.

Mass spectrometry is a popularly used technique as it allows the detection of low concentration analytes. In addition, advanced instrumental techniques including, infrared (IR) spectroscopy, mass spectroscopy, and nuclear magnetic resonance (NMR) spectroscopy along with ELISA (enzyme-linked immunosorbent assay) test kits are majorly used for safety assurance in the region.

The governments in the region have launched several initiatives including Good Farming Practice (GFP), Good Agricultural Practice (GAP), and follow the Food Safety Modernization Act implemented by the U.S. government in 2011. These regulations ensure that testing laboratories meet high-quality standards and projected to drive market growth over the forecast period.

The government agencies are stepping up to monitor the food supply chain to minimize the contamination. The private sector is also contributing to the efforts by testing the raw ingredients and final products. In addition, increasing international trade with other countries, where regulations are stringent is expected to boost food safety testing.

Central & South America food safety testing market is anticipated to be driven by growing instances of outbreaks of foodborne diseases, leading to consumer awareness regarding food safety, which will consequently drive the market growth.

Food safety concerns are anticipated to rise as consumers' preferences for new and exotic items, such as tropical fruits, fine coffee, and imported goods, increase. The consumption of packaged and ready-to-eat foods is also predicted to increase as a result of changing lifestyles and a rise in two-earner families.Thus, the demand for these products is driven by technological improvement, changing lifestyles, modern retail trades, and the increased popularity of quick-service restaurants.

The demand for chemical testing of processed food products is anticipated to be driven by various chemical additives and preservatives used in the processing of these products to extend the shelf - life. In addition, the products are tested for residues and contaminants. In many cases, packaged food exhibits contamination due to the migration of chemicals from packaging materials. Hence, increased consumption of packaged food is further expected to increase the need for migration testing of these products.

To reduce contamination, the government agencies are strengthening their monitoring of the food supply chain.  The private sector is also contributing to the efforts by testing the raw ingredients and final products.  Additionally, increasing trade with countries where stringent laws are anticipated to increase food safety testing.

In March 2017, all the major beef exporters in Brazil including JBS, Minerva, BRF, and Marfig were surrounded by a major food safety scandal. The scandal was labeled ‘Operation Weak Flesh’ around the globe. This operation revealed that these global players had bribed the health officials into approving the sales and export of contaminated meat, which was past the expiry date. As Brazil is one of the biggest markets for food safety testing in Central & South America; hence, the scandal had a negative impact on market growth in the region.

The regional governments have launched several initiatives such as Good Agricultural Practice (GAP) and, Good Farming Practice (GFP) These initiatives adhere to the Food Safety Modernization Act, which was put into effect by the U.S. government in 2011. Over the forecast period, these laws are expected to fuel market expansion by ensuring that testing facilities adhere to high standards.

Microbiological testing is a crucial requirement across numerous applications in the food industry and accounted for the largest share of the market. The risk of being negatively affected by microorganisms such as E. Coli, Salmonella, Campylobacter, listeria; and bacteria causing significant contamination and damage to human health have a major impact on market growth.

Genetically Modified Organisms (GMO) testing is anticipated to grow at a CAGR 5.8%, owing to stringent regulations regarding the cultivation of GMO seeds. Harmful effects due to the presence of GMOs in the food have caused the governments to issue regulatory measures governing genetically modified products, which has resulted in an increase in GMO testing within the food sector.

An increase in the use of unapproved pesticides for crops and preservatives in eatables is estimated to lead the growth in residue & contamination testing over the forecast period. The contamination of vegetables and fruits with pesticides can lead to many health hazards including cancer, malformation, and damage to the endocrine, nervous, and immune systems thereby driving the segment growth.

Chemical & nutritional testing of products is essential to know the nutritional composition of eatables and to ensure compliance with labeling regulations. Mass spectroscopy is the most commonly used testing technique which allows the detection of low-concentration analytes and ensures that the product meets all the regulatory requirements regarding nutritional declarations.

Meat, poultry, seafood, and its derived products contribute the largest share to the market and accounted for 39.1% in 2017, owing to high meat production in the region. These products are analyzed for the presence of chemical constituents such as fat & moisture content, protein, and protein on a fat-free basis (PFF) has a positive impact on driving the market growth.

Improper use of antibiotics and unapproved drugs in aquaculture is a major concern for seafood product manufacturers owing to their hazardous effects on consumers. This spiked the demand for drug residue testing in seafood products and processed crab meat. An increase in exports of seafood from the region is expected to aid the market growth further. 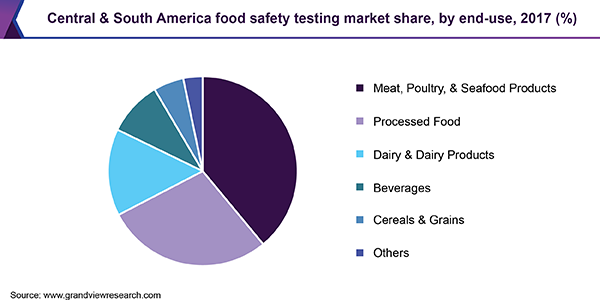 Processed food segment accounted for 28.3% of the revenue share in 2017 as the convenience and ready-to-eat eatables undergo a number of tests including sensory analysis, health claims, allergen testing, shelf life testing, and packaging migration analysis. Increasing consumer preference for processed and exotic fruits in the region is driving the segment growth.

The growing customer requirements for premium quality beverages with longer shelf-life including soft drinks, energy drinks, fruit juices, and alcoholic beverages are leading to the increased use of concentrates, flavorants, and preservatives in the products. This has resulted in increased instances of beverage testing thereby driving the segment growth over the projected period.

The government of Peru has implemented stringent laws regarding the safety testing of food products as a result of the rising number of foodborne disease outbreaks in the region. The consumption of packaged and processed foods is on the rise in the region, which is expected to further fuel market expansion. In addition, the rising number of frauds along with an increase in allergy-prone populations in the country is expected to drive market growth over the projected period.

The market exhibits a large number of players providing the food safety testing service to the food manufacturers, leading to high competitive rivalry in the market. However, the market is highly concentrated with a handful of players controlling the larger market share and trying to build goodwill by providing better service to its customers.

The market is very capital intensive, thereby making it difficult for the new entrants to establish their business. Major food manufacturers prefer long-term contracts with the laboratories, further providing barriers to the entry of new players. Furthermore, the industry has witnessed a trend of increasing consolidation, which is expected to continue over the forecast period.

This report forecasts revenue growth at global, regional & country levels and provides an analysis on the industry trends in each of the sub-segments from 2014 to 2025. For the purpose of this study, Grand View Research has segmented the Central & South America food safety testing market on the basis of test, end-use, and country: