The product also finds applications for industrial purposes such as preparation of etchants which is used in electronic products mainly photomasks and liquid crystal displays. The product is expected to increase its penetration in the medical industry and metal surface cleaning process.

In terms of revenue, the market witnessed a decline in revenues in the past two years on account of falling raw material prices. The prices are expected to stabilize over the forecast period directly impacting market revenues.

Laboratories were the leading application segment in the global market. The sector is expected to increase slightly over the forecast period. The application area was the leading segment as CAN is used for wide range of reactions which include oxidation, synthesis of heterocycles, generation of carbon (heteroatom bonds), generation of carbon-carbon bonds, cleavage of carbon (heteroatom bonds), cleavage of Si-O bonds, C-halogen bond formation, and CAN-catalyzed multi-components.

China is a major raw material supplier owing to availability of cerium in abundance. Manufacturers mainly based in China and Korea are focused on offering attractive prices to attract end-use industries. 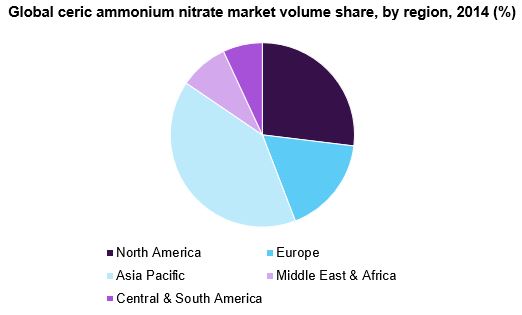 Manufacturers have also integrated their operations in order to enhance their profits and increase overall product supply. Uranus Chemicals Co. Ltd, Treibacher, American Elements, and ProChem have integrated their operations and are also involved in supplying or distribution business. Competition among manufacturers is expected to increase in the future.

How big is the ceric ammonium nitrate market?

What is the ceric ammonium nitrate market growth?

b. North America dominated the ceric ammonium nitrate market with a share of 48.7% in 2019. This is attributable to broad range of applications in laboratories for organic reactions

Who are the key players in ceric ammonium nitrate market?

What are the factors driving the ceric ammonium nitrate market?

b. Key factors that are driving the market growth include increasing penetration of the product for industrial purposes such as preparation of etchants which is used in electronic products mainly photomasks and liquid crystal displays