The global chondroitin sulfate market was valued at USD 1.1 billion in 2018 and is estimated to grow at a CAGR of 3.2% from 2019 to 2025. Increasing demand for nutraceutical products along with the prevalence of osteoarthritis is expected to drive the market growth over the forecast period.

Chondroitin sulfate is mostly used to treat osteoarthritis, cataract, and urinary tract infections, which is anticipated to drive the overall demand for the product over the forecast period. It is also used in the form of medicines to improve digestive function, enhance liver function, lower blood sugar, and inhibit tumor metastasis. 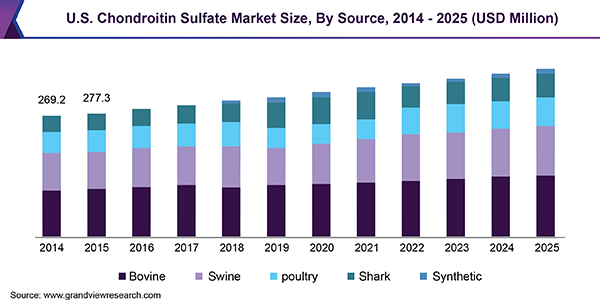 Sodium chondroitin sulfate is used in dietary supplements and food products as thickeners, additives, foaming agent, preservatives, and in health food. It is used in animal feed due to its ability to treat joint pain and arthritis including diseases such as chronic pain and aches from osteoarthritis, elbow dysplasia, and hip dysplasia in animals. Use of the product in food grade and feed grade applications is presumed to witness faster growth rate over conventional uses in the near future.

The product has witnessed a high adoption rate in developed economies such as Germany, the U.K., and the U.S. as compared to other emerging economies globally. This can be associated with high prevalence and consumer awareness regarding osteoarthritis in the countries, favorable regulations, and developed healthcare infrastructure. Increasing R&D activities in developed economies to improve quality and reduce operational costs are anticipated to drive the demand over the forecast period.

Bovine segment emerged as the dominant source segment in 2018 as it is used in various applications including nutraceuticals, pharmaceuticals, and animal feed. Bovine cartilage is a byproduct of beef industry, which is generated on a large scale across the globe. Cattle byproducts are already used for human consumption in various parts of the world. These factors have prompted manufacturers to opt for bovine as a source for producing sodium chondroitin sulfate.

Synthetic chondroitin is manufactured using a two-stage fermentation-based process. The process excludes the use of animal cartilages, thereby, reducing the occurrence of contamination and adulteration. In addition, the extraction process is less complicated, thus, resulting in low production cost. The demand for synthetic chondroitin is expected to grow in the Asian and the Middle Eastern countries as the product is not of animal origin and, therefore, it is an alternative for vegetarian people with religious and dietary restrictions. 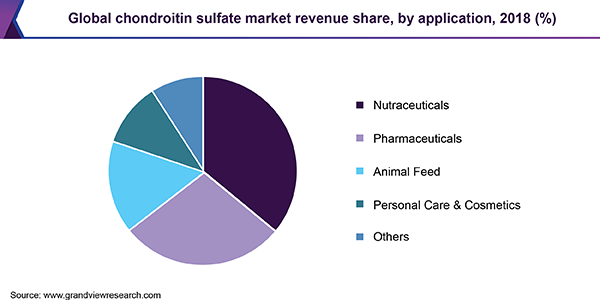 It is sold as a prescription drug under the European Medicines Agency. Another application includes its insertion into the bladder for urinary tract infections (UTIs), bladder conditions, or loss of bladder control. Increased consumption of sodium chondroitin sulfate in pharmaceutical applications to treat heart diseases, for use as eye drops, and to relieve joint pain and osteoarthritis is anticipated to drive the chondroitin market.

The chemical is also used in food preparations as a thickener, foaming agent, and preservative. It is used in food applications including beverages, chewing gums, and dairy products. Favorable government regulations concerning consumption of the product as a food additive are projected to drive the market growth over the forecast period.

North America was the largest regional market and was valued at USD 402.6 million in 2018. The industry growth in the region can be attributed to the booming pharmaceutical industry in the U.S. coupled with FDA approval for using sodium chondroitin sulfate infused products. Factors such as high prevalence of osteoarthritis and increased use of the product to treat cholesterol, in cataract surgery, and in eye drop formulations are anticipated to drive its demand.

In 2003, the product’s toxicity level was ranked at number 6 on a scale of 0-100 by the European League Against Rheumatism (EULAR) board. Sodium chondroitin sulfate is used in pharmaceutical sector across several EU countries such as Switzerland, Italy, Austria, Greece, Portugal, France, and Eastern Countries. Asia Pacific is estimated to be the fastest-growing region, which is projected to record a CAGR of 3.4% over the forecast period owing to high prevalence of osteoarthritis and rising consumer awareness regarding dietary supplements. Asia Pacific was the second-largest regional market in 2018 with the expansion of end-user industries including nutraceutical, pharmaceutical, personal care, and cosmetics in the region. Increasing production of the product in the region and increasing exports from key countries such as China and Japan are anticipated to contribute to the industry growth.

Key manufacturers in the developed economies such as the U.S., France, Germany, and the U.K. supply majority of sodium chondroitin sulfate to key players in the nutraceutical and pharmaceutical sectors. The growth in this market can be attributed to the prevalence of osteoarthritis and increasing consumption of dietary supplements.

The market is highly fragmented in nature owing to the presence of a large number of manufacturers, especially in China. Competitive rivalry in the market is high owing to increasing investments in R&D for product innovation and increasing efficiency of the product. High competition concerning the final prices of the product and shifting focus of manufacturers on utilizing natural extracts, thus denote high rivalry in the market.

This report forecasts revenue growth at global, regional, and country levels and provides an analysis of the industry trends in each of the sub-segments from 2014 to 2025. For the purpose of this study, Grand View Research has segmented the global chondroitin sulfate market report on the basis of source (by application) and region: