The global chromatography resin market size was valued at USD 1.90 billion in 2021 and is projected to expand at a compound annual growth rate (CAGR) of 5.4% from 2022 to 2030. The growth in this market is attributable to the rising demand for the chromatography technique from pharmaceutical, chemical, food & beverage, and other industries. High R&D investments in the industry have propelled the development of several products, resulting in the improved productivity as compared to conventional products. Chromatography resin is one of the notable examples of the evolving industry dynamics. It has gained a considerable market share in recent years across several end-use industries owing to its high accuracy and ease of use. 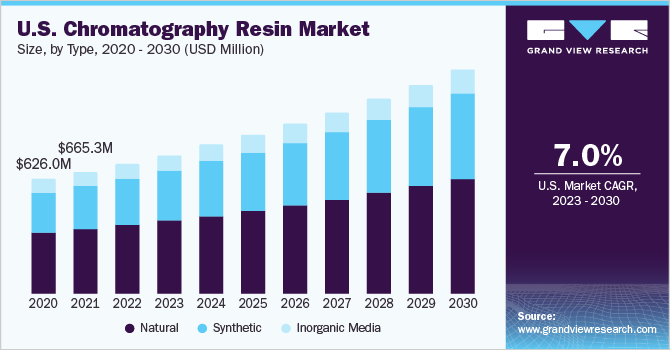 The U.S. is expected to remain a major consumer in the industry as most of the pharmaceutical companies are based in the U.S. This region has seen strong growth due to focused government spending on research and development. The rise in disposable income has also directly translated into increased spending on essential and preventive healthcare services, thereby boosting product consumption.

Increasing demand for therapeutic antibodies for treating patients is also a major driver that is triggering industry growth. The shifting trend toward replacing conventional separation techniques, such as distillation and filtration using chromatography is also driving innovation for the use of the product in numerous new segments. The chromatography resin industry is oligopolistic in nature. The major players hold more than 60% share, while regional players have control over the remaining share. The pricing and various other strategic initiatives of the market depend on the top market players.

The natural resin segment dominated the market with a revenue share of more than 51% in 2021. This high share is attributable to the increased consumption of naturally derived products, and wide utilization of size exclusion chromatography and paper chromatography in several industrial applications. Natural resin consumption in North America is largely dominated by the U.S. on account of the presence of several global pharmaceutical giants in the country. The expanding pharmaceutical and biomedical sectors because of the rise in healthcare expenditure, and increasing demand from the F&B sector, are key drivers for the market in North America. Additionally, government allocation of funds for R&D of more productive chromatography resins is anticipated to further drive the natural product demand in various applications and end-uses in North America.

On the other hand, the synthetic resin segment is anticipated to grow at a faster pace during the projection period, owing to its rising utilization in ion exchange chromatography, which is used in F&B industry, as well as in areas such as chemicals, pharmaceuticals, petrochemicals, sugar production, water treatment, and softening of industrial water. Synthetic resin is increasingly being used instead of natural resin to increase production figures.

The ion exchange technique segment dominated the market with a revenue share of over 42% in 2021. This high share is attributable to the increasing emphasis on drug discovery processes by major pharmaceutical companies and CROs (contract research organizations).

On the other hand, affinity emerged as the second-largest technique segment, accounting for more than 26% of the overall market share. The continuous rise in the use of monoclonal antibodies, and increasing demand for protein purification and nucleic acid purification processes are the major factors responsible for propelling the growth of the affinity resin market.

The pharmaceutical & biotechnology end-use segment dominated the chromatography resin market with a revenue share of over 87% in 2021. The high segmental share is attributable to the increased consumption of these resins in pharmaceutical processes to produce extremely pure materials in large quantities and to examine the purified compounds for contamination. 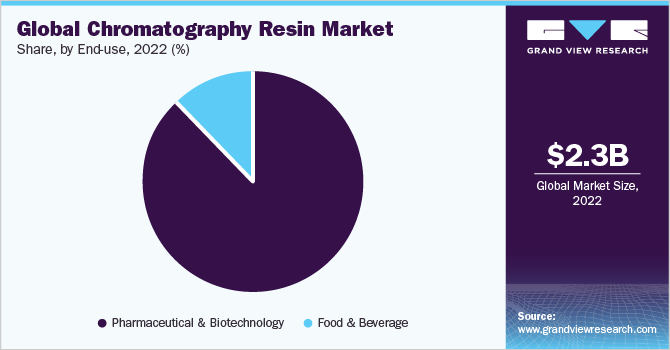 Moreover, growing use of monoclonal antibodies in critical therapeutic areas such as oncology, tuberculosis, and autoimmune diseases is likely to drive demand for chromatography resins in the coming years. The increasing number of contract manufacturing organizations (CMOs) and contract research organizations (CROs) in the pharmaceutical sector is anticipated to drive the product demand.

Furthermore, the ion exchange technique is one of the most creative and active fields in the food and beverages industry, which subsequently plays a vital role in the growth of the food industry. The food & beverages end-use segment is anticipated to be the fastest-growing segment during the projection period, owing to the increasing implementation of strict guidelines issued by food regulatory authorities all over the world.

The North America region dominated the market with a revenue share of more than 33% in 2021. This high share is attributed to the growing demand for drug discovery processes to control diseases across the globe, such as Ebola, Zika, and others. Growing interest in the use of monoclonal antibodies in therapeutic areas is also expected to fuel the industry in North America.

The U.S. is the major consumer of the product in the North America region, accounting for more than 91% of the market. The country offers a premier scope for chromatography resin on account of its highly developed pharmaceutical industry and growing utilization in end-use applications, combined with the presence of a highly skilled workforce and growing R&D initiatives to encourage innovative product applications.

Europe is home to major manufacturers such as Merck. The European Union’s initiatives such as the Innovative Medicines Initiative (IMI), which aims to speed up the development of better and safe medicines, have given a major boost to the chromatography resin demand. Germany is the biggest consumer of chromatography resin in Europe, owing to the significant presence of research and development facilities of global pharmaceutical companies in the country. The region is increasingly exporting medicines and related products to neighboring countries as well as other economies around the world.

Major Asia Pacific countries including China, India, and Japan, among others are expected to witness high economic growth during the forecast period. Growing government support for domestic manufacturing is likely to boost regional production levels and reduce the dependence on imports, which is expected to present lucrative opportunities for global and regional manufacturers.

The market for chromatography resin is not a consolidated industry but a diversified one, with the presence of both multinational and local players. Key players such as Thermo Fisher, Merck, and GE Healthcare have a wide-ranging product portfolio, extensive distribution network, and high degree of operational integration. The major players in the chromatography resin industry are investing extensively in R&D, which has led to the invention of several novel products that can be utilized across the previously niche market.

Other chromatographic resin producers, such as Tosoh Corporation, also occupy a significant share in the market. These companies are actively engaged in strategies such as mergers and acquisitions to improve their standing in the market. Such strategies are only serving to boost industry competitiveness and improve the company’s position in the overall market. Some prominent players in the global chromatography resin market include:

This report forecasts revenue and volume growth at global, regional, and country levels and provides an analysis of the latest industry trends in each of the sub-segments from 2018 to 2030. For the purpose of this study, Grand View Research has segmented the global chromatography resin market report on the basis of type, technique, end-use, and region:

How big is the chromatography resin market?

b. The global chromatography resin market size was estimated at USD 1.9 billion in 2021 and is expected to reach USD 2.0 billion in 2022.

What is the chromatography resin market growth?

Which segment accounted for the largest chromatography resin market share?

b. North America dominated the chromatography resin market with a share of over 38% in 2021. This is attributable to the increasing demand for biopharmaceuticals along with the growing necessity for drug discovery to combat coronavirus disease.

Who are the key players in chromatography resin market?

What are the factors driving the chromatography resin market?

b. Key factors that are driving the chromatography resin market growth include the development of novel resin products, which have better productivity in comparison to conventional resins.