The global chromium market size was estimated at USD 13.07 billion in 2016. Increasing demand from the stainless steel industry for various end-use markets such as automotive, aerospace, defense, marine, building and construction, and electronics is expected to be the key growth factor. In addition, significant demand from Asia Pacific is anticipated to fuel the market over the forecast period. China was the largest consumer of the product as it is one of the largest manufacturers of stainless steel and other specialty steel products. 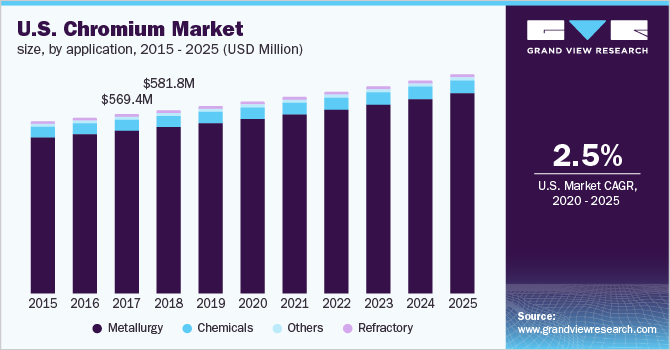 The chromium market in U.S. was valued at USD 557.8 million in 2016 and is expected to progress at a CAGR of 2.5% over the forecasts period. Being a major stainless steel manufacturing country, U.S. is also a major global manufacturer of chromium-based chemicals and chromium ore is extensively used for refractory applications. The primary source of chromium supply is in the form imported and domestically mined chromium ore. Increasing infrastructural development activities in the country are likely to fuel demand over the forecasts period.

However, carcinogenic properties and volatility in prices are posing a challenge to the growth of the market. Chromium is toxic and found in the environment in two forms: hexavalent (Cr VI) and trivalent (Cr III). Cr III is considered to be lesser toxic than Cr VI in case of acute as well chronic exposure. Cr VI severely affects the respiratory tract in humans following prolonged exposure. Coughing, shortness of breath, wheezing, and neurological and gastrointestinal effects are among common irritations caused by its exposure.

Metallurgy was the largest application segment in 2016 and the trend is anticipated to continue over the forecast period. Stainless steel and high resistance steel manufacturers are major consumers in the metallurgy segment. Chromium is used in the form of ferroalloys, metals, and scrape of stainless steel in metallurgical applications. It is an important alloy element used in the manufacturing of high strength steel due to its excellent mechanical, high oxidative, high hardness, and corrosion resistance properties. It has no substitute in stainless steel or any other superalloys and scrap can be used as an alternative to ferrochromium in some metallurgical end uses.

The chemicals segment accounted for USD 708.2 million in 2016 and is anticipated to register a CAGR of 1.9% over the forecast period. The main product containing chromium in the chemical industry is sodium dichromate, which is widely used as a process material for surface treatment of various metals and feed material for the production of other chrome chemicals in the chemical industry. Chromium-based chemicals include chrome oxide, chromic acid, and potassium dichromate.

Asia Pacific was the largest market in 2016, accounting for 49.6% of the global revenue. The regional market is anticipated to offer several opportunities over the forecast period. Presence of major stainless steel manufacturing units in countries such as China, India, and Japan is contributing toward increased demand for chromium in the region. Moreover, India is a major chromium ore producer and exporter, while China is a major importer in the global market. These factors are anticipated to further fuel demand over the forecast period. 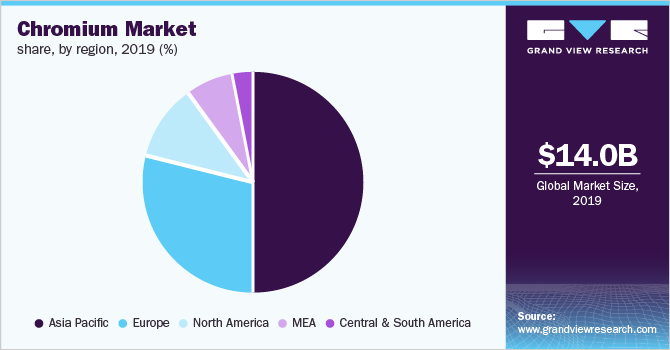 Europe was the second largest consumer of chromium in 2016 due to presence of some major stainless steel manufacturing units in countries such as Russia, Germany, U.K., and Turkey. Kazakhstan and Turkey together accounted for approximately 9,000 million tons of mining production of chromium ore in 2016.

The degree of rivalry varies depending upon product demand, innovation in technology, regulatory compliance, and distribution network. For instance, the market is concentrated in North America; whereas, in Asia Pacific, there is intense competition among players.

This report forecasts revenue growth at global, regional, and country levels and provides an analysis on industry trends in each of the sub-segments from 2014 to 2025. For the purpose of this study, Grand View Research has segmented the global chromium market report on the basis of application and region: