The global ferroalloys market size was valued at USD 42.7 billion in 2020 and is expected to expand at a compound annual growth rate (CAGR) of 7.1% from 2021 to 2028. Incessant production of steel around the world is projected to benefit market growth. Ferroalloys are a group of materials consisting of iron and different alloying elements which are normally used for the production of steel. Ferroalloys are used in steelmaking to improve the specific properties of steel products. The properties such as fatigue strength, tensile strength, corrosion resistance, and ductility are improved through the addition of ferroalloys. 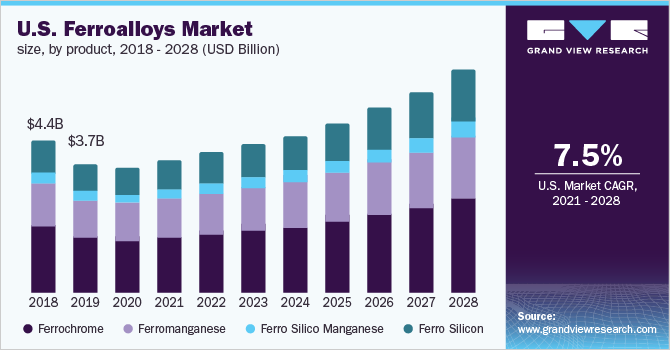 The U.S. market for ferroalloys is supported by the expansion of the steel sector in the country. For instance, in September 2021, United States Steel Corporation has announced an investment of USD 3.0 billion for the construction of a mini-mill for flat steel production. The mill is likely to have 2 modern electric arc furnaces and is likely to produce sustainable steel solutions such as Advanced High Strength Steel (AHSS).

Similarly, Nucor Steel has started constructing a steel plant in Brandenburg, Kentucky. This boom in the U.S. steel industry is mainly benefited by steel tariffs imposed by Trump Administration. In 2018, the Trump government imposed steel tariffs under section 232 of U.S. trade law. The government is focused to improve steel supply for industries such as infrastructure, armaments, and advanced military equipment.

In the recent past, steel companies have started investing in the country to explore the opportunities in the country. Companies like Ak Steel, CMC, Steel Dynamics, and Cleveland-Cliffs have invested huge amounts in 16 major projects across the nation. Most of the projects will use the electric arc furnace method to produce the steel. Thus, the expansion of the steel industry in the U.S. is likely to attract significant steel demand over the coming years.

The global ferroalloys market is expected to grow on account of rising steel production around the world. The ferroalloys include ferrochrome, ferrosilicon, ferromanganese and ferromolybdenum, among others. Various types of ferroalloys have different purposes in the production of steel. For instance, ferrovanadium in steelmaking is used to provide strength against alkalis and acids such as sulphuric and hydrochloric acid. It provides corrosion resistance and enhances tensile strength of casting & welding electrodes.

Nearly 85 to 90% of all the ferroalloys are used in the production of steel. Therefore, production and consumption of steel and related products have a huge impact on the pricing of ferroalloys and vice versa. Cost of ferroalloy is one of the key criteria for deciding suitable ferroalloy for the production of a particular grade of steel. Specification of steel is also an important factor while calculating the costs of steelmaking. For instance, specific grade of steel with low phosphorous can be manufactured using two methods viz. either by the use of normal steelmaking process, which uses expensive ferroalloys with low phosphorous content or by increasing the refining time and basicity of slag to reduce phosphorous at low levels.

As per the World Steel Association, the global production of crude steel reached 1,950.5 million tons in 2021, an increase of 3.7% from 2020. China was the leading producing country with production of 1,032.8 million tons in 2021. China was followed by India, Japan, the U.S., Russia, South Korea, Turkey and Germany. These leading countries are expected to remain the key markets for ferroalloy producers.

Construction is the largest end-use industry of steel products, wherein rebars, sections, channels and angles are widely used in the industry. The construction sector around the world is projected to grow moderately from 2022 to 2030. This is expected to positively affect the demand for steel products and thus benefit the demand for ferroalloys, which are among the key feedstocks in the production of steel.

Infrastructure investment plans in different countries around the world is likely to benefit the crude steel demand and thus ferroalloys. For instance, Turkey’s long term infrastructure development plan is likely to generate high demand for steel products in the country. Under ‘Vision 2023’, the government of Turkey is expected to build 5,748 km of highways and 13,478 km of roads by 2023. The plan also includes development of 10,000 km of high speed railway line by 2023.

The ferromanganese segment accounted for a share of over 17.0% in 2020, in terms of volume in the market for ferroalloys. Ferromanganese finds primary application in steelmaking and foundry industries. The key driver for the demand for ferromanganese in steelmaking is its use as desulphurizing agent owing to properties such as sulfide and deoxidant former. Manganese combines with sulfur to avoid the formation of iron sulfide, which can result in cracking.

Silicomanganese is a ferroalloy containing 65 to 68% of manganese, 1.5 to 2% of carbon, and 16 to 21% of silicon and is manufactured using smelting of slag from high carbon ferromanganese. It also has a smaller quantity of elements such as sulfur, phosphorous, and carbon. Silicomanganese is used to add both manganese and silicon as ladle addition during steelmaking owing to its lower carbon content.

The ferrosilicon segment is projected to witness a CAGR of 7.7% from 2021 to 2028 in terms of revenue. It is used to reduce the metals from their oxides such as the deoxidization of steel. It also provides corrosion resistance, improves the quality and strength of iron and steel products. Ferrosilicon is used in the manufacturing of stainless steel, alloy steel, carbon steel, electrical steel, and cast irons.

The stainless steel segment dominated the market and accounted for the largest revenue share of over 32.0% in 2020. The segment is projected to witness a lucrative CAGR over the forecast period. As per The International Stainless Steel Forum (ISSF), China was the largest stainless steel producing country with a share of around 59% in 2020. The production in the country witnessed an increase of in 2020 2.5% from 2019. While on a global level stainless steel production witnessed a y-o-y decline of 2.5% in 2020 to reach 50.9 million.

Cast iron is projected to remain the fastest-growing segment in the market over the forecast period. Cast iron is a ferrous alloy with a small percentage of manganese, chromium, nickel, tungsten, and molybdenum among others. Advantages such as the low cost involved in the production of parts, good casting properties, higher compression strength, durability, and resistance to deformation are projected to contribute to the growth of the segment. 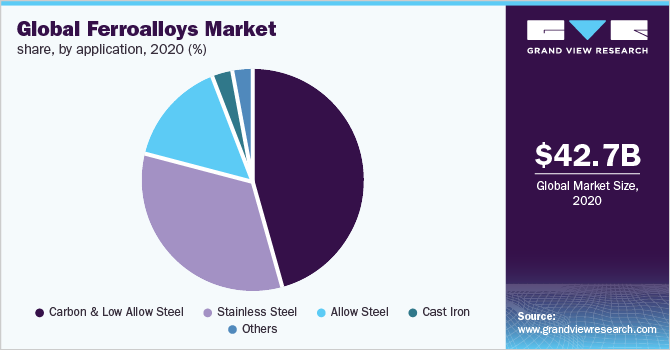 Asia Pacific region dominated the market in terms of volume as well as revenue and accounted for over 61% share of global revenue in 2020. China being key consumer and producer of ferroalloys, is projected to remain leading country in the industry over the coming years. The emerging regional markets for ferroalloys in Asia Pacific region are India, Indonesia, Malaysia and Vietnam. China and aforementioned emerging market are expected to observe lucrative growth over the coming years.

The well-established automotive sector in Germany is witnessed sluggish growth as leading market players such as Volkswagen, Ford, and BMW announced temporary closure of their manufacturing plants amid the spread of COVID-19 in 2020; however, production resumed in the second half of 2020. Volkswagen announced temporary closure of its facilities in Germany, Italy, Spain, Portugal, and Slovakia in 2020. These facilities produce various cars brands named Audi, Porsche, SEAT, Lamborghini, and Volkswagen. 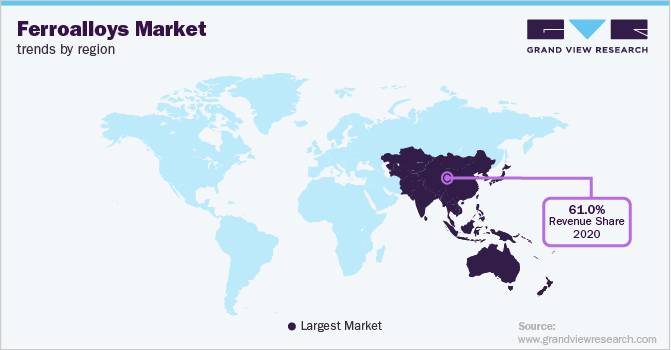 As of December 2020, there were ~41 final assembly plants across 16 states of the country. The production of passenger cars by Germany contributed a share of ~30% to the overall passenger car production in Europe. The automotive industry in the country comprises more than 950 companies with ~70% of automotive suppliers being small-sized and medium-sized companies. Consistent production from these companies is projected to play a key role in the demand for steel products in long term. This, in turn, is anticipated to contribute to the demand for metal deoxidizers.

The market is competitive in nature and is likely to observe new investments from existing large players over the coming years. For instance, Zimasco, a subsidiary of Sinosteel Corporation has announced an investment of USD 35.0 million for ferrochrome production capacity addition. A new project is likely to start at the Kwekwe ferrochrome smelting complex with an additional capacity of 72 kilotons per year. Rising production capacities to meet the steel production are projected to increase the competition in the market. In April 2021, Tata Steel Mining (TSML) has confirmed its plans to double its ferrochrome capacity to 9 lakh tons per annum in India. TSML has already become the largest chrome ore mining company in India after the acquisition of Karmada, Saruabli, and Sukinda mines. Some of the prominent players in the ferroalloys market include:

This report forecasts revenue and volume growth at the global, regional, and country levels and provides an analysis of the latest industry trends in each of the sub-segments from 2017 to 2028. For the purpose of this study, Grand View Research has segmented the global ferroalloys market report on the basis of product, application, and region: 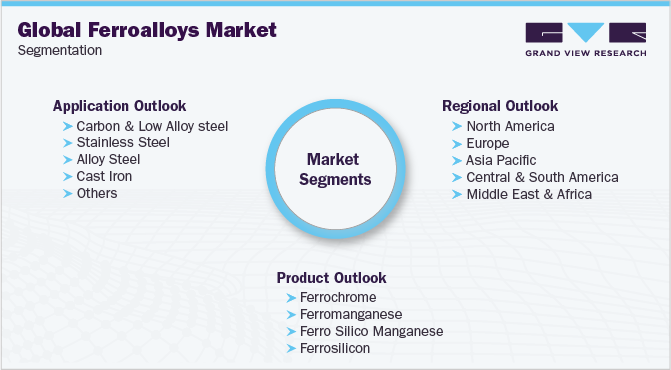 Who are the key players in the ferroalloys market?

What are the factors driving the ferroalloys market growth?

b. Key factors that are driving the ferroalloys market are rising demand for steel products in the building & construction, automotive, aerospace, and machinery industries.

How big is the ferroalloys market?

What is ferroalloys market growth?

Which segment accounted for the largest ferroalloys market share?

b. Based on region, Asia Pacific was the largest market with a share of over 76.0% in 2020, owing to the high volume production of crude steel and other types of steel.