The global cigar and cigarillos market size was valued at USD 16.99 billion in 2018. It is expected to expand at a CAGR of 3.1% during the forecast period. The global market is expected to witness substantial growth owing to the increasing number of luxury hotels with cigar lounges. Following the worldwide ban on smoking in public places, such lounges and bars are making an appearance in luxury hotels and bars. For instance, the DUKES Hotel of London welcomes its stogie-loving visitors in the cognac and cigar garden. The secluded courtyard located behind the hotel offers a list of cognacs to accompany the Cuban cigar. 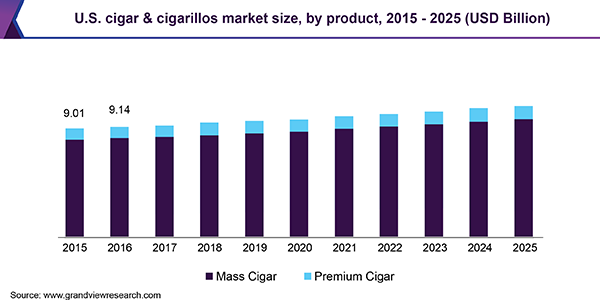 The introduction of various flavors including wine, tea, chocolate, and vanilla to mask the harsh taste of tobacco is fueling the demand among the young consumers. Flavored product is the most popular variety among premium cigars. The flavors such as sweetened tobacco products like swisher sweet and white owl are leading the market for generations, while flavored products like Tatiana, Acid, and Java have contributed to an increase in demand for the flavored product in the last 15 years. In addition to this, companies operating in the tobacco product industry are conducting R&D activities in order to offer better tobacco quality and innovative flavors to compete in the market.

China is one of the prominent markets for premium cigars and is expected to become the largest market in the upcoming years. Traditionally, a cigar was considered a luxury tobacco product, which is purchased by rich, middle-aged consumers. However, increasing penetration of low-cost products coupled with a growing number of young billionaires in China is expected to promote the usage on a domestic level. Moreover, Cuban cigar manufacturers are focusing on increasing their market reach through strategic collaboration.

For instance, in 2017, Habanos S.A. signed an agreement with the China National Tobacco Corporation to increase the import of premium cigars. The company is focusing on training its sales force along with increased spending for the expansion of its distribution networks. However, Habanos S.A. is facing challenges in increasing awareness related to the various brands such as Montecristo, Romeo, and Julieta, on account of the increased visibility of Cohiba, one of the island’s leading brands popular among Chinese consumers.

Demand for Cuban cigars is expected to witness significant growth in India on account of the increasing concentration of cigar clubs in cities including New Delhi, Bengaluru, Mumbai, and Kolkata. The demand is attributed to growing brand awareness among the neo-rich coupled with the increased influence of western culture among young consumers. However, the lack of adequate choice and limited marketing due to stringent government regulations on the advertising of tobacco-related products are expected to hinder the growth in the near future.

The premium cigar segment is expected to witness the fastest growth over the forecast period on account of growing demand from luxury hotels and bars. Furthermore, premium products are handmade and are witnessing significant demand from developed markets such as the U.S., U.K., and China. Growing popularity of unique tastes and favor is positively influencing the demand for this category for the past few years. Moreover, online stores are witnessing strong demand for premium categories which is expected to drive the market during the forecast period.

In 2018, the tobacco/no flavor segment led the market in terms of revenue share and is expected to maintain its dominant position over the forecast period. The segment was valued at USD 12.05 billion in 2018 and is expected to expand at a CAGR of 3.0% from 2019 to 2025. Most of the NORDIC population preferred no flavor tobacco products, followed by chocolate and vanilla-flavored tobacco products.

North America held the largest market share in 2018, attributed to the growing demand for premium cigars from luxury hotels and bars in the U.S. According to the Cigar Association of America, about 330 million sticks were shipped to the U.S., in 2017, making it the biggest import year in nearly two decades.

Nicaragua led the import market and was the largest exporter of premium cigars for two consecutive years, beating the Dominican Republic once again. Increased import from Nicaragua was due to the love for the unique taste of Nicaragua tobacco among U.S. consumers. However, stringent rules and norms by the U.S. Food and Drug Administration (FDA) for the launch of new products coupled with the heavy taxation by the U.S. government is expected to restrain the growth in the near future. 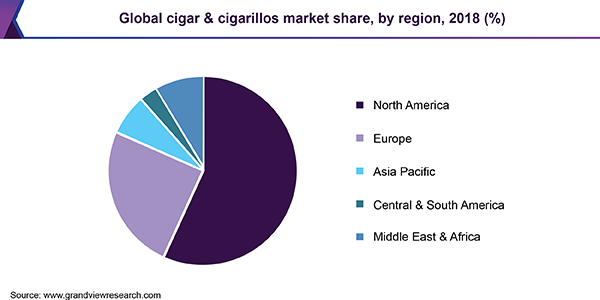 Europe is expected to expand at a CAGR of 1.9% over the forecast period. Increasing preference by women is projected to drive the regional market. An increasing number of female smokers in the countries like Poland and Russia is expected to boost the demand in Europe. Furthermore, increasing taxation on cigarettes, their bad reputation coupled with increased prices has led to a shift in consumer preference in the region.

Asia Pacific is expected to register a CAGR of 8.9% over the forecast period. The demand for Cuban cigars is growing in the region. China was the largest regional market and held a 48.35% share of Asia Pacific cigar and cigarillos market. Cigar is considered a luxury product to accompany drinks and meals. The moments of meals with family and friends are considered vital in the Chinese tradition and people organize ceremonial meals for celebrating important occasions. This time is considered appropriate in the country to share drinks and cigars with family, friends, and co-workers, which in turn has led to a rise in demand from China.

The global market is getting more and more diversified with the availability of products in all the ranges and flavors. The topmost competitors are Nicaragua, the Dominican Republic, Honduras, and Brazil. In recent days various verities are launched by the manufacturers to gain greater market share. Many regional and domestic players are entering the market with unique and innovative products to gain a customer base. Recently, in Europe, Switzerland entered into cigar manufacturing and the Swiss brand “Davidoff” is gaining popularity as a brand with a unique quality of the product. Moreover, Nicaragua innovated organic cigars with the brand name “Plasencia”, which is expected to gain popularity in Asia, especially in China.

This report forecasts revenue growth at global, regional, and country levels and provides an analysis of the latest industry trends in each of the sub-segments from 2015 to 2025. For the purpose of this study, Grand View Research has segmented the global cigar and cigarillos market report on the basis of product, flavor, and region:

How big is the cigar and cigarillos market?

What is the cigar and cigarillos market growth?

Which segment accounted for the largest cigar and cigarillos market share?

b. North America dominated the cigar and cigarillos market with a share of 56.4% in 2019. This is attributed to the growing demand for premium cigars at luxury hotels and bars in the region.

Who are the key players in cigar and cigarillos market?

What are the factors driving the cigar and cigarillos market?

b. Key factors that are driving the market growth include increasing number of luxury hotels with cigar lounges,.coupled with introduction of various flavors including wine, tea, chocolate, and vanilla to mask the harshness of tobacco.