The global clear brine fluids market size was valued at USD 820 million in 2018. It is projected to expand at a CAGR of 3.3% during the forecast period. Demand for energy has been increasing year-on-year, which, in turn, is driving the need for oil and gas production as fossil fuels are the primary source of energy.

The gradual increase in crude oil prices in 2017 following their slump from 2014 to 2016 has led to moderate growth in drilling operations across different geographies. The number of rig counts increased from 1,620 in October 2016 to 2,298 as of January 2019 globally, depicting a rise in drilling activities. Drilling operations are expected to increase further over the forecast period, thereby propelling the demand for clear brine fluids. 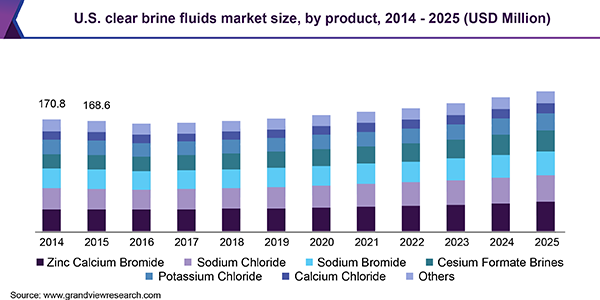 Clear brine fluids generate the required density without the need of maintaining viscosity for carrying weight-material particulates as all weight-material is dissolved completely. These solutions are primarily used in the good completion stage. They act as a direct alternative to water-based formulations, which can be used only once and need to be disposed of after that. These fluids are environment-friendly and also help in rock formations. Unlike water-based mud, brine solutions reduce the chances of mud swelling.

The primary advantage of saline solutions is that they increase the rate of penetration along with an increase in run life. However, this specific characteristic largely depends on the management of temperature levels, thermal capacity, and connectivity. With the right execution, these fluids can be reliable free systems that help achieve the required density.

Moreover, these formulations have the least adverse effects on the environment and they do not cause any damage to the drilling equipment either. The aforementioned superior advantages of the saline solutions over other drilling fluids are anticipated to drive their demand over the forecast period.

Despite the global economic depression in late 2008 and during the first quarter of 2009, oilfield service companies witnessed a significant improvement in their profit margins. Oil prices started declining in the last quarter of 2014 until 2016; however, the prices did not drop any further in the first and second quarter of 2017.

The overall production of crude oil has not gone down despite the decline in its prices, which, in turn, is anticipated to ensure continuity in the demand for completion fluids. Moreover, the increasing complexity of drilling operations and decreasing productivity from the existing wells are some of the factors that have propelled the need to achieve an optimum level of operational efficiency.

A majority of the investors in clear brine fluids market are focusing on penetrating the emerging markets such as Central and South America, Eastern Europe, and the Asia Pacific. Leading multinational players intend to expand their presence in lucrative regions such as the Asia Pacific and exploit some of the advantages of these geographies such as low cost of land and labor and the comparatively lenient governing norms.

Optimizing the production process becomes imperative with the increasing complexities in drilling operations, which is likely to boost the product demand soon as they offer several functional benefits. The market is becoming highly competitive with the increasing number of players. A rise in the presence of small as well as large players has been crucial in altering the market dynamics in terms of product pricing.

The depletion of the proven hydrocarbon reserves and increasing complexity in the production of oil and gas have led to the deployment of several tertiary processes such as enhanced oil recovery. Increasing EOR activities globally is yet another crucial factor boosting the drilling operations, thereby leading to a greater requirement for the application of clear brine fluids as completion and workover chemicals. The aforementioned technological and functional advantages coupled with the yearly rise in oil and gas production are expected to be the major market drivers.

Zinc calcium bromide solution is used in oil and gas well completion and workover operations with a density of approximately 19.2 lb/US gallon. This brine fluid is toxic to aquatic life with long-lasting effects, however, the product category holds a significant market share due to its high efficiency. 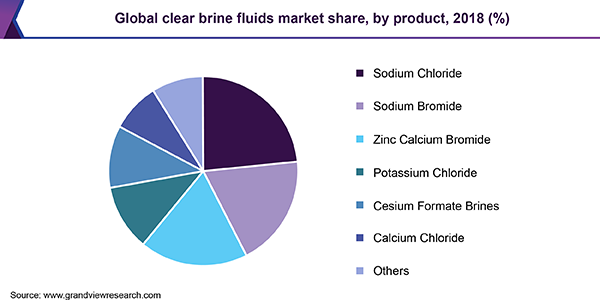 The product possesses highly efficient characteristics and the blend can be formulated to cater to the high-density requirements. These high-density fluids show compatibility with completion and formation fluids.

Sodium chloride is the cheapest of all the products and is a widely available economical brine product used for inhibition and density. The product is generally used for low-pressure wells and can also be used to adjust the density of other unsaturated brines such as potassium chloride, ammonium chloride, and seawater. It also reduces salt dissolution when drilling halite salt sections and freezing point of water-based solutions.

The Middle East led with over 30% of market share in 2018 in terms of revenue. Growing energy demand in tandem with the supportive government initiatives to lessen dependency on oil imports is anticipated to drive onshore and offshore oil drilling operations. However, severe policies regarding oil pollution are also likely to affect the demand for efficient hydrocarbon exploration and production formulations in near future.

The Middle East and Africa are one of the most prominent regions in the global oil and gas industry. Drillers from this region can now proficiently drill and complete separate, multiple, pressure-isolated, and accessible laterals from any single original wellbore. Thus, delivering broader growth prospects for the completion and drilling fluids sector.

Nigeria, Angola, Kenya, and Mozambique are the key contributing nations to the African oil and gas sector. However, Africa has witnessed a downward trend in the oil and gas industry with players shifting towards geologies offering promising returns with attractive fiscal terms.

The Asia Pacific is expected to be the fastest-growing region in terms of consumption volume over the estimated period. China, India, and Indonesia lead almost every aspect of the regional petroleum industry. Also, several upcoming advancements are anticipated to have significant strategic and commercial implications on the E&P activities, products, and equipment market.

Various technological advancements for increasing productivity and reducing production cost are projected to play a vital role in regional growth and is further projected to witness rapid pace over the forecast period.

The market is competitive in terms of product offerings and drilling technologies. New product developments, partnerships, collaborations, and joint ventures are some of the strategies adopted by industry players to increase market penetration. Some of the key competitive factors include product quality, brand, modest pricing, and efficient distribution network.

Top players have implemented sustainable solutions considering the long-term benefits and easy availability of raw materials. Companies are focusing on a strategy of locating plants in the proximity of raw material sources or chemical hubs and processes certified with authenticity for inbound raw materials. Some of the prominent vendors include ICL, Cabot Corp., LANXESS, Albemarle Corporation, EMEC, Schlumberger, and Tetra Technologies.

This report forecasts volume and revenue growth at global, regional, and country levels, and provides an analysis of the latest industry trends in each of the sub-segments from 2014 to 2025. For this study, Grand View Research has segmented the global clear brine fluids market based on product and region: