The global oilfield services market size was valued at USD 103.26 billion in 2016. The increasing development of new oilfields and the rising demand for energy is expected to be key factors driving the market over the forecast period. According to the U.S. Energy Information Administration (EIA), global energy consumption is growing at a rapid rate owing to the increased electricity consumption and transportation. This is further supported by the rising per capita income and the surge in the global GDP. The global economy has witnessed a steady growth over the last few years. Mature economies such as the U.S. and Europe witnessed an increase in their respective GDPs after 2011 owing to the capacity expansions in various industries, increased exports, and the rising incomes of individuals. 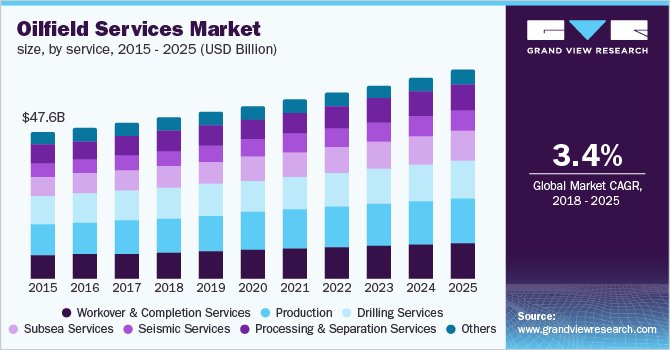 The market, in terms of service, in the U.S. was valued at USD 46.60 billion in 2014 and is anticipated to ascend at a steady CAGR of 3.7% over the forecast period. The need for oilfield services is increasing on account of the presence of major players in the U.S. and the growing requirement for energy. These factors are predicted to boost the regional demand for oilfield services over the next few years.

According to BP’s Energy Outlook 2017, the demand for natural gas is projected to witness the maximum growth rate from 2008 to 2020. It is likely to record an estimated CAGR of 1.9% from 2012 to 2035, with a majority of this growth reported in non-OECD countries, outpacing the demand in the OECD member countries. The growing demand for energy, particularly for natural gas, has prompted the market to shift its focus toward oilfield services.

The growing demand for refinery products is also likely to boost the oil & gas production in the region in the long term. The increasing need for crude oil and natural gas in China, Russia, and Saudi Arabia is estimated to provide an impetus to onshore projects in the coming years. Major participants in the market, such as Schlumberger Limited, Halliburton, and Baker Hughes, Inc., are investing in R&D activities related to renewed projects and abandoned oil wells in various onshore oilfields.

These initiatives are anticipated to positively drive the market over the forecast period. Harsh environments such as dry climate, desert topography, and extreme temperatures have compelled market participants to come up with efficient lubricants and cooling agents to protect and extend the life of their equipment. The rising volume of onshore oil & gas exploration, particularly in Saudi Arabia, the U.S., China, and Russia, is anticipated to fuel the demand for drilling fluids over the forecast period.

The increasing global offshore rig count, which recorded an annual average of over 4% in 2016, coupled with the significant development of existing offshore wells, both in deep and ultra-deep waters, particularly in the South China Sea, Persian Gulf, and the Gulf of Mexico, is estimated to drive the sector over the forecast period. The growing need to increase the rates and efficiency of oil & gas production and to mitigate gas-related capital expenditures is likely to fuel the demand for oilfield services in offshore activities over the forecast period. The increasing number of ongoing projects in the Middle East & Africa, including the Maydan Mahzam and Bul Hanine fields, is projected to drive the market over the forecast period.

Workover & completion solutions include fluid control in reservoirs, sand control, zonal isolation, and well repairs. These services are performed on a well when it is considered to be unsuitable for the production of oil & gas resources. The components used in the downhole sector, such as electrical submersible pumps, safety valves, and tubing, malfunction owing to intensive working temperatures and pressures and hence need to be replaced or repaired at regular intervals. These factors are anticipated to boost the market growth over the forecast period.

The rising need for energy, due to the growing population and rapid industrialization, has led to the requirement for large-scale exploration activities. Increasing participation to sustain the demand for energy in the region coupled with the growing number of deepwater discoveries is projected to drive the subsea segment over the forecast period. Companies such as Next Geosolutions and M2 Subsea have signed an agreement to carry out subsea survey operations at the Aberdeen port of Scotland. Manufacturers are shifting their focus toward the development of new solutions based on nanotechnology to overcome the existing technological and environmental challenges in drilling activities.

Seismic service is a modern technique, which enables rig operators and geoscientists to determine the orientation and depth of underground rocks without drilling a well. This is achieved by bouncing off sound waves from the bottom of the onshore drilling rig onto the surface beneath. The same procedure is followed in offshore drilling sites, wherein sound waves are transmitted from the drilling platform by means of guns, streamers, and tail buoys. This solution enables rig operators to obtain a 3D image of the surface beneath and helps them analyze the surface carefully, before deciding to conduct a drilling operation on it. These factors are anticipated to boost the market growth over the forecast period.

The global demand for oilfield services is witnessing a rise owing to the exponentially increasing population and the need to suffice the resulting energy demand. The field operation segment was the largest segment in 2016 and accounted for a share of 40.4% in the market, by type. E&P companies opt for equipment rental services to cut down the cost of buying the equipment required for drilling purposes. Various types of equipment rented by E&P companies include tubing, handling tools, diesel towers, trailers, cementing products, injectors & tubing guide arches, power supply/prime movers, control consoles, control & monitoring equipment, electrical pumps, artificial lifts, downhole connectors, and well-control stack equipment. 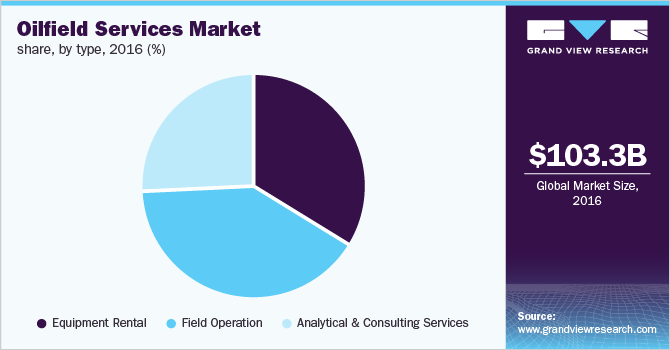 Owing to the complexity of the procedure, E&P companies often consider outsourcing their drilling operations to minimize the risks involved. Field operations include the solutions required for drilling wells, insertion of tubing into wellbores, reservoir management, and extraction of oil & gas resources from the resource beds. The field operation segment helps E&P companies attain their maximum operating limits within a specified time frame. These also include remote operations including repair & maintenance, extraction of resources, and monitoring. This segment thus helps companies minimize risks and is expected to drive the oilfield services market at a steady rate over the forecast period.

Predicting the outcome of field operations helps operators plan ahead of time. In case a mishap such as an oil spill occurs, operators are thus likely prepared to manage the situation. Analytical & consulting solutions help E&P companies analyze the surface or the rocks to be drilled without actual drilling. This segment employs techniques, such as optimization, simulation, mathematical testing, and experimental designs along with scientific methods to come up with the best possible solutions to meet the needs of E&P companies. These modern techniques help minimize the risks involved in oilfield operations and are thus predicted to propel the market over the forecast period.

Depleting conventional resources have prompted the global oil & gas industry to shift to developing unconventional resources such as shale oil & gas, tight oil & gas, and coal bed methane (CBM). However, extracting them requires specific techniques. This shift is anticipated to drive the market over the forecast period. Governments across North America and Asia Pacific have been supporting the use of hydraulic fracturing. However, it is banned in countries such as France and Bulgaria on account of the environmental hazards caused by the activity. Nevertheless, being a country with the highest number of shale gas reserves, China has been taking giant steps toward its development in order to meet the ever-increasing domestic demand for energy in the country. The government of China has set up stiff shale gas production targets, which require the use of oilfield solutions. Major companies across the globe have been focusing on investments in China.

The Alaska Oil and Gas Association (AOGA) has imposed some of the most stringent regulations on the use and implementation of oilfield services in the region. These regulations require the complete disclosure of chemicals used in drilling operations. These chemicals should be reported to FracFocus, a national website maintained by the EIA for the disclosure of chemicals used by the public. There are several government regulations (federal, state, and local) related to oil & gas drilling and environmental protection in the U.S. These regulations are laid down by various government authorities such as the U.S. Department of Energy (DoE), U.S. Environmental Protection Agency (EPA), and Energy Information Administration (EIA).

Asia Pacific has emerged as a leading energy consumer over the last decade. The rise in energy consumption in the region is supported by the ever-increasing population, especially in China and India, which fuels the basic energy requirement for electricity, transportation, and fuel for cooking. The demand for crude oil and hydrocarbons in the region is growing due to the increasing rate of urbanization.

China has been investing four times as much as the U.S. in order to develop its shale reserves. This has created the immense potential for oil & gas companies, such as Halliburton and Schlumberger, to expand. In July 2013, Schlumberger inaugurated a 32,000 square feet reservoir laboratory in Chengdu, China, to support the increasing exploration activity by providing the analysis of rock in unconventional shale plays.

The government of Algeria has taken initiatives by alleviating the regulations pertaining to services offered by the two major oilfields of Hassi Messaoud and Ourhoud. In July 2016, the oil production from Hassi Messaoud rose to 470,000 Mbbl, up from 420 Mbbl. The same from Ourhoud grew from 100 Mbbl to 125 Mbbl. These initiatives are anticipated to drive the market over the forecast period.

Schlumberger provides its customers with a wide array of hydraulic fracturing products and solutions, which include multistage fracturing solutions, fracking with coiled tubing, PerfFRAC shale gas dynamic fluid diversion services, and fiber-based fracturing solutions. Recently, the company introduced Broadband Sequence, a new fracturing technique, which facilitates the sequential stimulation of perforation clusters, especially in dry-gas wells in unconventional reservoirs. The new technique isolates fractures sequentially at the wellbore so that all clusters in each zone are accurately fractured.

This report forecasts revenue growth at the global, regional, and country levels and provides an analysis of the industry trends in each of the sub-segments from 2014 to 2025. For the purpose of this study, Grand View Research has segmented the global oilfield services market on the basis of application, service, type, and region: