The global Comprehensive Metabolic Panel (CMP) Testing market size was estimated at USD 10.8 billion in 2018 and is expected to register a CAGR of 7.3% during the forecast period. Factors such as the rising prevalence of chronic diseases and emphasis on early diagnosis and treatment are expected to drive the demand for CMP testing. High prevalence of lifestyle-associated diseases, such as obesity coupled with the prevalence of smoking, unhealthy eating habits, and lack of physical activity are among the factors responsible for increasing the incidence of chronic diseases.

Diabetes is one of the fastest-growing diseases in the world, widening the patient pool for point-of-Care (PoC) CMP testing. Increasing prevalence of diabetes and cardiovascular, and other target diseases, is anticipated to boost the demand for CMP testing over the forecast period. Cardiovascular diseases are fatal and are considered the leading cause of deaths worldwide. 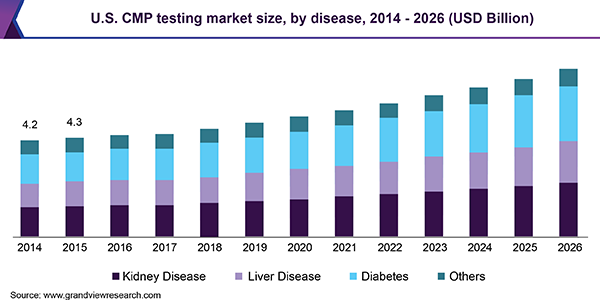 The healthcare industry is largely dependent on regulatory frameworks established by organizations such as the U.S. Food and Drugs Administration (FDA) and the European Medicines Agency (EMA). Regulatory bodies like Clinical Laboratory Improvement Amendments (CLIA) regulate the approval of these tests and the fee waiver as well as the reimbursement for Medicare and Medicaid is set by government bodies. The FDA has control over the Laboratory-Developed Tests (LDTs) that refer to in-house clinical laboratories developing tests, delivering efficient and rapid results.

Reimbursement and regulatory bodies in Europe impose stringent laws. Most European manufacturers set the pricing based on the Return of Investment (RoI) and follow value-based pricing. There is an oversupply of testing products that are a redundant and large number of products with similar indications. However, this led to lower pricing and faster processing time as well as the wider availability of the products.

The introduction of innovative solutions for enhancing efficiency and minimizing errors is expected to boost the CMP testing market growth over the forecast period. Integrated workflow management systems and database management tools are gaining importance with companies processing several thousand samples per year. Development and execution of various bioinformatics and data management solutions, coupled with the emergence of automated systems in laboratories, indicate a prosperous future for the market.

Kidney diseases held the leading market share in 2018, driven by a high disease prevalence and maximum utilization of analytes. Renal anomalies could arise from other comorbidities, such as diabetes and high blood pressure. Nearly 50% of patients had a history of cardiovascular disease or diabetes. Lack of early symptoms poses a challenge to the early diagnosis of the disease.

Diabetes is one of the fastest-growing chronic diseases, globally. According to the International Diabetes Federation, nearly 425 million adults were affected by diabetes in 2017-with an estimated 629 million by 2045. Nearly 50% of diabetics remain undiagnosed, presenting a lucrative opportunity for growth for the comprehensive metabolic panel testing market.

Laboratories held the leading market share in 2018, driven by easy availability, high market penetration, increased usage, and clinically significant results. Some laboratories may be in/and affiliated with hospitals, blood banks, and specialized diagnostic centers. Furthermore, the extensive presence of ancillary support - in terms of manpower and infrastructure - is a key propeller for market growth. 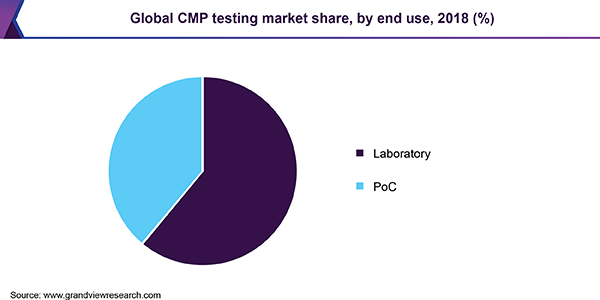 The emergence of PoC diagnostics has caused a revolutionary shift in the market for CMP testing. PoC CMP tests are projected to witness rapid growth shortly, driven by their ease of operation, portability, speed of results, and lesser requirement of the sample. However, even as the nascent PoC technology evolves further to meet the consumer demand for improved and streamlined diagnosis, laboratory testing of CMP is anticipated to retain the leading position in this market.

North America led the market in 2018, owing to strong commercial performances of CMP diagnostics in U.S. High disease burden, rising consumer awareness, proactive government measures, technological advancements, and improvements in healthcare infrastructure are some of the major contributors of market growth. Furthermore, the presence of key players is projected to bode well for the demand for CMP testing.

Asia Pacific is expected to expand at the highest CAGR during the forecast period, driven by improvement in healthcare infrastructure, growth in consumer awareness, rise in disposable income, and overall economic development. The market in emerging countries such as China, India, and South Korea is expected to witness rapid growth in demand for CMP testing during the forecast period.

This report forecasts revenue growth at global, regional, and country levels and provides an analysis of the latest industry trends in each of the sub-segments from 2014 to 2026. For this study, Grand View Research has segmented the global Comprehensive Metabolic Panel Testing market report based on disease, end-use, and region: