The Congestive Heart Failure (CHF) treatment devices market was valued at USD 15.6 billion in 2015 and is expected to witness a CAGR of 8.1% over the forecast period. The rising burden of Cardiovascular Diseases (CVDs) is one of the prime factors responsible for the lucrative growth of the CHF treatment devices market. Sedentary lifestyles, mental stress, and junk food consumption are other key factors associated with the development of CVDs.

CVDs are a group of disorders characterized by functional or structural abnormalities or both that affect the functioning of the heart and the associated blood vessels. According to the World Health Organization, CVDs contribute to the maximum number of deaths globally. In 2012, approximately 17.5 million deaths were reported from CVDs, representing 31.0% of the global death statistics. Of the 17.5 million deaths reported, 7.4 million were due to coronary heart disease and 6.7 million were due to stroke.

Favorable reimbursement policies, such as the U.S. Medicare system, is a prime growth factor for this vertical. Medical device companies now provide new product platforms, which are covered under reimbursement programs that benefit the patient. The reimbursement can be availed for devices, such as VADs, ICDs, and pacemakers that are used to treat CHF.

Individuals above 60 years of age forms the key target population for CHF treatment devices. This demographic is characterized with low immunity levels and are prone to chronic diseases including CVDs; and thereby serve as a high impact rendering driver for the growth of these products over the forecast period. As a result, the latest treatments available in cardiac care are expected to increase the life span of the elderly population subset. The chart below forecasts the number of geriatric patients over the next six years, which form the routine target group contributing to the rise in surgical volumes.

The Implantable Cardioverter Defibrillators (ICDs) held a lucrative share in the market due to its ability to perform three basic functions, which include defibrillation, cardioversion, and pacing of the heart. The ICD segment consisting of two types, transvenous and subcutaneous, held a lucrative share in 2015, which was followed by the pacemaker’s segment. This can be attributed to the fact that defibrillators and pacemakers form the primary line of treatment administered for heart failure. On the other hand, the VAD segment is anticipated to grow at a significant rate over the forecast period due to reimbursement coverage and technological advancements in VADs 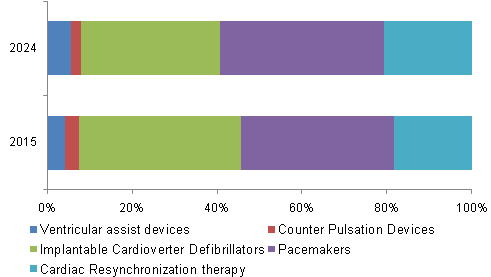 North America dominated the overall industry in terms of revenue share at over 40.0% in 2015; this can be attributed to the presence of a large population base suffering from cardiovascular disorders coupled with a significant geriatric population base. Asia-Pacific is expected to grow at the fastest CAGR during the forecast period and its share is expected to grow, owing to the increasing demand for these products. Furthermore, the rapidly improving healthcare infrastructure in the countries, such as India and Japan, also contribute toward the growth of this region.

According to the American Heart Association, 17.3 million deaths occur due to cardiovascular disorders, and this number is expected to rise to 23.6 million by 2030. This high prevalence resulted in greater usage of this equipment in this region. In addition, developed healthcare infrastructure in the U.S. facilitated access to advanced therapeutics. This contributed to the growth of this region. Moreover, the availability of reimbursement for cardiovascular therapies supported the growth substantially.

Some of the market players in this vertical include Medtronic Plc, Boston Scientific Corporation, Biotronik SE & Co., KG, St. Jude Medical, among others. The operating strategies adopted by these players include new product launches and regional expansions. For instance, in November 2015, Biotronik launched Biomonitor 2 in Europe, which is an implantable cardiac remote monitor. The product launch is anticipated to help the company expand its existing product portfolio in Europe.

Biotronik also launched Ilesto series of the CRT-D system in May 2013, post-FDA-approval for the treatment of atrial fibrillation. The product launch will aid Biotronik in expanding its cardiac rhythm management product offerings.

Market Segments Covered in the Report

This report forecasts revenue growth and provides an analysis of the market trends in each of the sub-markets from 2013 to 2024. For the purpose of this study, Grand View Research has segmented remote patient monitoring devices market on the basis of product and region:

How big is the congestive heart failure treatment devices market?

b. The global congestive heart failure treatment devices market size was estimated at USD 21.9 billion in 2019 and is expected to reach USD 23.5 billion in 2020.

What is the congestive heart failure treatment devices market growth?

b. The global congestive heart failure treatment devices market is expected to grow at a compound annual growth rate of 8.1% from 2016 to 2024 to reach USD 32.0 billion by 2024.

b. Pacemakers dominated the congestive heart failure treatment devices market with a share of 37.8% in 2019. This can be attributed to the fact that pacemakers form the primary line of treatment administered for heart failure.

Who are the key players in congestive heart failure treatment devices market?

What are the factors driving the congestive heart failure treatment devices market?