The global consumer drone market size was valued at USD 3.42 billion in 2021 and is anticipated to grow at a compound annual growth rate (CAGR) of 13.8% from 2022 to 2030. Consumer drones are becoming increasingly popular among people that want to earn a second income, explore with aerial photography, or fly drones for fun, in addition to traditional flight enthusiasts and hobbyists. Customers are increasingly exploring the benefits of drones in enriching leisure activities and interests, resulting in a significant increase in global consumer drone sales. Furthermore, the recent initiatives by the Federal Aviation Authority (FAA) and additional governmental spending on advanced drones are anticipated to drive industry growth in the U.S. 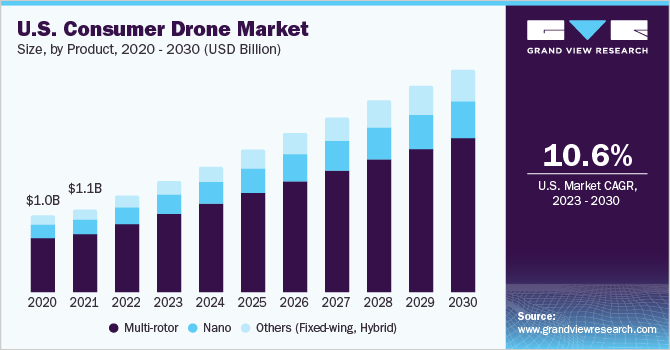 For instance, in July 2022, Flytrex Inc., an Israeli drone delivery company, received approval from FAA to expand its business services in Texas and North Carolina. The FAA also granted them permission to increase their delivery radius to two nautical miles. Furthermore, the company asserted that it expanded its business in the United States; its customer base went from 40,000 to 100,000, proving advancement’s impact on the industry. Several organizations in different industries have started to invest in drones as a result of rapid growth in the market for drone services. Companies that invest in drones anticipate that the analysis of the data that drones collect will result in cost reductions, revenue growth, and better decision-making.

Drones are being used by the media and entertainment industries for aerial photography, cinematography, and special effects. More changes will emerge as drones start collaborating with other technologies. For instance, road and railroad operators can benefit from using drones and 3D modeling software during the design stage. In addition, the integration of AI enables drone suppliers to gather and utilize visual and environmental data by using information from sensors attached to the drone. Computer vision is a crucial element of drones powered by AI. With this technology, drones can identify objects in the air and analyze & record data on the ground. With onboard image processing and high performance performed with neural networks is how computer vision works.

AI, analyzing sensors, data processing, and drone network capabilities would help them collaborate with 3D printers, robots, and other technologies. For instance, in July 2022, Microsoft launched a simulator to train AI systems in drones. The simulator would help in software development and training also allowing them to track how winds may affect the battery life. The advantages of using drones are similar to adopting any new technology. Consumer drone demand is expected to increase due to the growing popularity of steady aerial capturing, photography, and videography. The market for consumer drones has surged due to new manufacturing innovations for the product.

The latest drone model technologies offer navigation systems linked to the user’s device, high range, and control systems that are reliable, safe, efficient, and provide better speed. North America is the leading regional market globally, driven by a potential demand for drones in countries, such as Canada and the U.S. Furthermore, AI is used by drone makers to automate consumer drones. For instance, in February 2022, Phystech Ventures, a U.S.-based venture capital firm, stated that there had been a USD 5 billion investment in drone technology in the past two years.

The multi-rotor product segment accounted for the largest share of more than 69.85% of the overall revenue and is presumed to grow substantially over the forecast period. Multi-rotors are used in aerial photography and filming, and the devices leverage the advantage of vertical take-off and landing, which is unavailable in the other counterparts. These devices have a higher payload capacity, making them suitable for different end-uses. Multi-rotor drones are significantly used in law enforcement in various regions. These have been viewed as a better alternative to inspection and payload carrier applications, which need higher precision maneuvering, the capacity to fly in many directions over challenging terrain, and unique targets for extended periods.

The toy/hobbyist drone segment accounted for the highest share of more than 65.00% in 2021. Drones are experiencing the most advancements of any contemporary technical development. Some toy drones now fly without operator guidance as autonomous flying technology becomes widespread. Nano drones are being increasingly used in toy/hobbyist applications by aviation enthusiasts across the world for recreational purposes. In addition, a rise in the need for lightweight drones is anticipated to fuel the segment expansion. The prosumer segment is anticipated to register the highest CAGR over the forecast period. 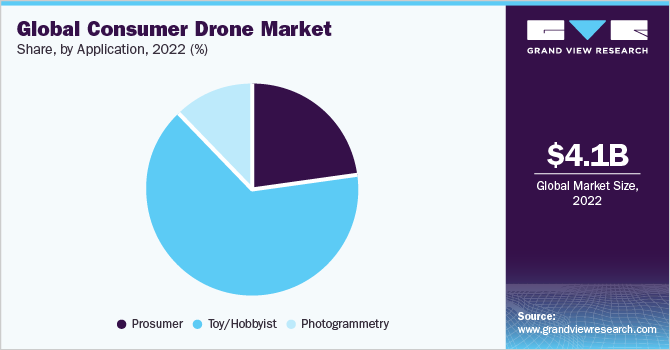 Steep growth in this segment can be attributed to the emergence of technology in electronics, which has attracted gaming enthusiasts to accept drones as their new source of recreation. Drone racing in the form of a recreational hobby is being promoted at a large scale in various geographies, boosting the adoption of drones for prosumer applications. Furthermore, drones and unmanned aerial vehicles are quickly replacing regular inhabited aircraft to approach wildlife from the air for various applications. The use of prosumer drones can, however, disrupt wildlife to varying degrees while being less disruptive than the use of occupied aircraft. Policies and protocols to guide drone flights with the lowest impact are most likely to succeed if they are based on scientific knowledge.

North America dominated the global industry in 2021 accounting for 36.00% of the overall revenue share owing to increased technological adoption. The Federal Aviation Administration’s (FAA) impending positive initiatives and rising government spending on such advanced drones are likely to drive business growth in the region. The market for civilian drones used for both recreational and commercial purposes has steadily expanded in recent years as a result of the rapid emergence of consumer electronics, the shrinking cost of the server, bandwidth consumption, the emergence of cloud technologies, and an enhancing price-to-performance ratio of hardware components, as well as a sharp increase in demand for “bird’s-eye” views of the earth. The expanding market in the U.S., stimulated by various themes, provides profitable business opportunities in the coming years. 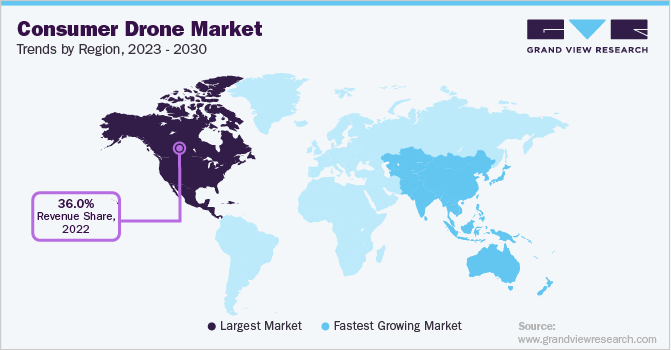 The Asia Pacific region is forecasted to register the highest CAGR from 2022 to 2030. This growth can be attributed to China’s vibrant drone industry, established consumer electronics market across Japan, and increasing demand for drones across developing countries, such as India, and Southeast Asia. In addition, the Chinese government has been offering various subsidy programs and other advantageous domestic policies for drone purchases to encourage the development of industrial sectors’ technical capabilities. Their expanding application fields are driving product demand in China. Asia Pacific is driving demand growth, with China in the lead. The region intends to establish a drone manufacturing base to capitalize on the growing business.

The industry has a high risk of new entrants. New developers in start-up businesses have been able to enter the market due to minimal entry barriers and easy access to existing technology. The competition is high despite the free market competition. New and innovative drone applications have left many users unexplored, thus limiting the threats from existing competitors. The competition will eventually intensify during the projected period as new entrants establish consumer bases and gain their trust as core producers. Moreover, the presence of many global and regional players has increased the level of competitive rivalry. Some of the major players in the global consumer drone market:

This report forecasts revenue growth at the global, regional, and country levels and provides an analysis of the latest industry trends in each one of the sub-segments from 2018 to 2030. For this study, Grand View Research has segmented the global consumer drone market report based on product, application, and region: 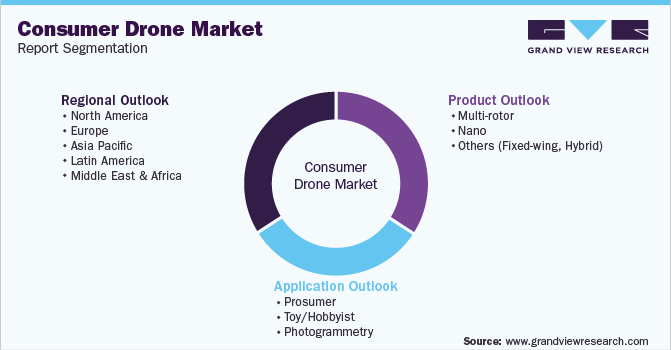 How big is the consumer drone market?

What is the consumer drone market growth?

Which segment accounted for the largest consumer drone market share?

b. The multi-rotor segment dominated the consumer drone market with a share of 69.9% in 2021. This is attributed due to the increased use of multi-rotor drones in aerial photography and FPV racing application.

Who are the key players in consumer drone market?

What are the factors driving the consumer drone market?

b. The consumer drone market's significant growth prospects can be attributed to the increasing prominence of drone flying as a hobby activity, such as UAV photography and racing.

Artificial Intelligence (AI), Virtual Reality (VR), and Augmented Reality (AR) solutions are anticipated to substantially contribute while responding to the COVID-19 pandemic and address continuously evolving challenges. The existing situation owing to the outbreak of the epidemic will inspire pharmaceutical vendors and healthcare establishments to improve their R&D investments in AI, acting as a core technology for enabling various initiatives. The insurance industry is expected to confront the pressure associated with cost-efficiency. Usage of AI can help in reducing operating costs, and at the same time, can increase customer satisfaction during the renewal process, claims, and other services. VR/AR can assist in e-learning, for which the demand will surge owing to the closure of many schools and universities. Further, VR/AR can also prove to be a valuable solution in providing remote assistance as it can support in avoiding unnecessary travel. The report will account for COVID-19 as a key market contributor.