The global consumer network attached storage market size was valued at USD 2.18 billion in 2016 and is expected to witness a significant increase in the market over the forecast period. Primarily the growth in the Consumer NAS market is expected to be driven by an increase in the data storage capacities and network sharing capabilities. 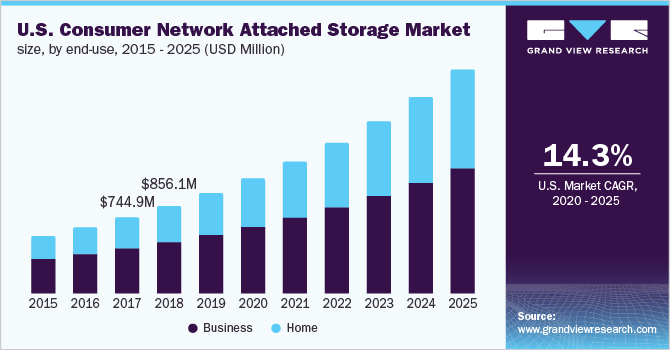 NAS is a storage device that allows you to connect to a personal or business network so that the user can access the files stored in the drive, from mobile devices and PCs without plugging in the drive externally. Innovative offerings such as access to high-quality data content and access to the stored data from any computerized system or mobile device to a user or others will enhance the customer experience and thus is expected to drive the demand for Consumer NAS market.

Growth in disposable income has increased the purchasing power of an individual, thus it is expected that this will improve Consumer NAS market growth. The modern-age population is becoming more tech savvy and acceptable toward technologically advanced products. Furthermore, increasing need of surveillance is a major factor driving the growth of the Consumer NAS market.

A typical Consumer Network Attached Storage consists of a central processing unit (CPU), memory unit and an operating system. It is available in diverse types such as NAS with preinstalled drives, diskless NAS and so on. It also offers an advanced way of retrieving the stored data without the need of a physical device.

The improved level of security has resulted in increased the regulatory needs to store and share data security within the organization, which in turn has boosted the usage of Consumer NAS.

Based on End-Users, the global consumer Network Attached Storage market has been segmented into the home and business. The Business segment is expected to account for a significant market share over the forecast period.

The Home segment follows next owing to majority of consumers implementing Consumer NAS as a backup system, media streaming device and for home surveillance. The deployment of network attached storage in small and medium businesses facilitates the reduction in ownership cost to the enterprise and thus drives the growth of Consumer NAS market. 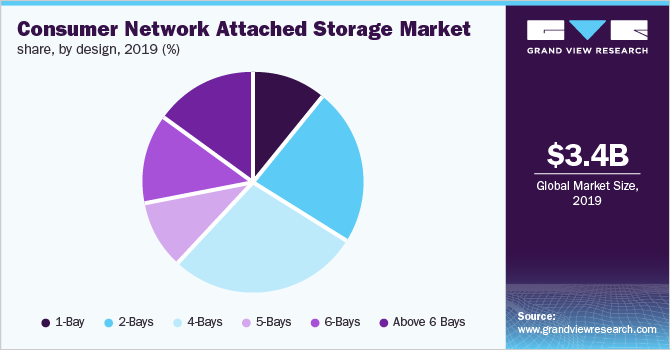 The networking ecosystems are undergoing a change from server-based models to data-based models. The growth in information storage, management, and retrieval has compelled consumers to make storage decisions separate from server decisions. Thus, it is expected to drive the change in the demand of Consumer NAS in the forecast period.

The presence of large technology companies and significant investments made in the R&D, are some of the major factors driving the growth of the market in the North American region. Currently, North America occupies a significant market share in the overall global market, which is followed by Europe due to the increasing awareness among individuals about the benefits offered by Consumer NAS.

Increasing usage network attached storage by technology startups in U.S. would lead to a significant increase in the demand for the overall U.S. market. Additionally, the region is one of the startup hubs of the world it is also expected to boost the market revenue significantly.

The Asia Pacific regional market is anticipated to account for a comparatively higher CAGR, owing to the increasing awareness among users regarding the benefits offered by the technology. Growth in the standard of living and increasing disposable income are the driving factors for the growth of the market in this region.

This report forecasts revenue growth at global, regional, and country levels and provides an analysis of the latest trends and opportunities in each of the sub-segments from 2014 to 2025. For this study, Grand View Research has segmented the Consumer Network Attached Storage(NAS) market based on End-User, Design and regions.