The global contrast enhanced ultrasound market size was valued at USD 1.4 billion in 2019 and is expected to grow at a compound annual growth rate (CAGR) of 3.5% from 2020 to 2027. The usage of contrast agents with a standard ultrasound system enhances diagnostic efficiency, accuracy, and experience. Therefore, its growing utilization rate in ultrasonography specifically to examine complex structures of the cardiac, renal, liver, and vascular systems is driving the market. The introduction of affordable contrast agents, increasing ultrasound procedural volume, and contrast imaging modes becoming an integral feature of ultrasound systems are the prominent factors driving the market. For instance, in October 2019, Siemens Healthineers launched a state-of-the-art ultrasound technology called “Acuson Redwood” having in-built software systems to perform contrast-enhanced ultrasound procedures efficiently. 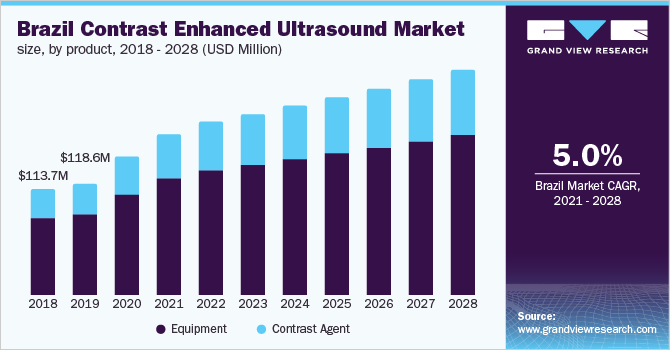 A wide range of potential advantages of Contrast-enhanced Ultrasound (CEUS) such as being completely radiation-free, quick, cost-efficient, and patient-friendly in comparison to the contrast-enhanced CT and MRI is expected to propel market growth. For instance, an abdominal CEUS can eliminate the need for other tests such as CT or MRI, saving unnecessary cost and time. Additionally, contrast-enhanced ultrasound is specifically helpful in patients with renal insufficiency, claustrophobia or facing difficulties to lay still during contrast-enhanced CT or MRI scans

The equipment segment held the largest revenue share of 72.7% in the contrast-enhanced market in 2019. The equipment used to perform CEUS is the standard ultrasound machine. Traditionally, the ultrasound unit with B-mode imaging was used to visualize contrast agents after applying several image processing algorithms.  However, the quality of the image produced using this technique was poor, with the presence of numerous imaging artifacts. The introduction of advanced ultrasound units with transducer technology and nonlinear imaging techniques has simplified the workflow of CEUS, thereby fueling the market growth.

The non-targeted contrast agents segment held a revenue share of 73.4% in 2019. It is the most common method of the CEUS imaging technique. All the approved ultrasound contrast agents are of a non-targeted type. The non-target contrast agent injected intravenously remains in the systemic circulation for a certain period.  When the microbubble in the blood passes through the imaging window, contrast-enhanced ultrasound images are produced. They are typically used to enhance diagnostic sensitivity, determination of the blood volume and flow in the area of interest, and to differentiate between malignant and benign liver tumors.

The targeted CEUS agents segment is anticipated to witness lucrative CAGR during the forecast period. In the targeted type, the microbubbles are targeted with ligands to bind specifically to molecular markers expressed in the area of imaging. Increasing utilization of targeted contrast agents in preclinical and clinical research activities to evaluate its therapeutic and diagnostic application in cancer care is anticipated to propel the growth of the segment. For instance, targeted contrast agents are modified to bind to the growth factors associated with a tumor. This would help in the diagnosis of cancer at very early stages.

The hospitals segment dominated the market and held the largest revenue share of 59.0% in 2019. The increasing number of emergency visits with medical conditions such as abdominal pain, abdominal/thoracic trauma, and cardiac complications has led to the soaring demand for CEUS in hospitals. In emergency cases, the diagnosis should be accurate and fast to reduce the delay between the onset of symptoms and initiation of definitive therapy. As MRI and CT scans are more time-consuming procedures than contrast-enhanced ultrasound, it has been increasingly preferred in hospital setups. 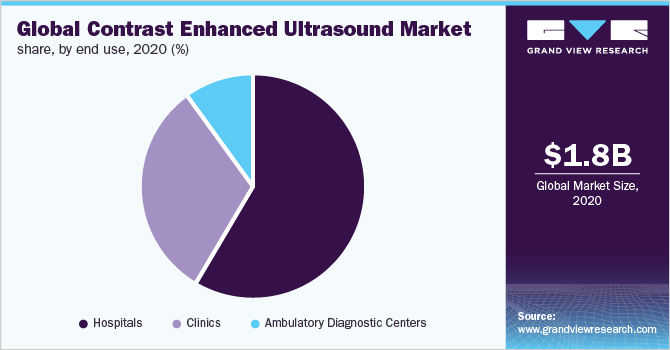 The limited access to advanced imaging modalities to MRI or CT has contributed to the increasing installation of contrast-enhanced ultrasound systems in clinics. MRI and CT are expensive, rendering their adoption in clinics having financial and space constraints difficult. The absence of CT/MRI at their clinics causes physicians to refer their patients to other centers, accompanying additional cost and delaying the time of treatment delivery. On the other hand, with improving accessibility to ultrasound devices and contrast agents, the adoption rate of contrast-enhanced ultrasound systems is expected to increase significantly during the forecast period.

The ambulatory diagnostic center is expected to show a lucrative growth rate over the forecast period. The increasing prevalence of chronic illness in rural areas has boosted the demand for diagnostic and image-guided procedures in the ambulatory diagnostic centers. The government initiatives undertaken to expand the reach of contrast-enhanced ultrasound services to rural areas is one of the prime segment drivers. Additionally, the development of favorable reimbursement policies for contrast-enhanced ultrasound examinations performed in ambulatory centers is anticipated to boost the growth of the segment.

North America captured the largest market share of around 25.0% in 2019. CEUS imaging has been used in cardiac and abdominal imaging over the years in North America, but with its recent approval for characterization of liver lesions, it is gaining increased attention. Besides, the execution of several education and training programs for sonologists and radiologists pertaining to the diagnostic and therapeutic use of CEUS in the region is anticipated to propel the market growth.

The publication of guidelines describing and recommending the newer possible application of contrast-enhanced ultrasound technology by the European Federation of Societies for Ultrasound in Medicine and Biology (EFSUMB) has increased the procedural volume of contrast-enhanced ultrasound in Europe. In addition to this, the recent approval of contrast agents for pediatric use in Europe is anticipated to boost the growth of the market in the region. For instance, in July 2017, SonoVue was the first contrast agent to be proved for vesicoureteral reflux in pediatric patients in Europe.

Asia Pacific is also anticipated to witness a significant CAGR over the forecast period owing to their large unmet needs with improving healthcare facilities, especially in countries such as India and China. Furthermore, the absence of efficient reimbursement policies and rising healthcare expenditure in several Asian countries have increased the demand for cost-effective procedures like contrast-enhanced ultrasound imaging.

Key companies are observed to be making significant investments in research activities to generate clinical evidence to present their products as superior over available alternatives. For instance, in March 2020, Lantheus Medical Imaging, Inc. revealed disappointing results of one of its two clinical studies conducted to compare the reproducibility and accuracy of its ultrasound contrast agent with non-contrast MRI in the measurement of left ventricular injection fraction. The market players to strengthen their presence in the market are adopting various strategies such as mergers and acquisitions, product launch, entering joint ventures, and partnerships. For instance, in March 2020, GE healthcare entered into a partnership with Daiichi Sankyo to receive the market authorization rights of Japan of its ultrasound contrast agents - Sonazoid. Some of the prominent players in the contrast-enhanced ultrasound market include:

This report forecasts revenue growth at global, regional, and country levels and provides an analysis of the latest industry trends in each of the sub-segments from 2016 to 2027. For the purpose of this study, Grand View Research has segmented the global contrast-enhanced ultrasound market report on the basis of product, type, end-use, and region:

How big is the contrast enhanced ultrasound market?

b. The global contrast enhanced ultrasound market size was estimated at USD 1.44 billion in 2019 and is expected to reach USD 1.49 billion in 2020.

What is the contrast enhanced ultrasound market growth?

b. North America dominated the contrast enhanced ultrasound market with a share of 25.0% in 2019. This is attributable to the approval of ultrasound contrast agents for newer indications and the presence of aggressive training and educational programs related to contrast-enhanced ultrasound practice.

Who are the key players in the contrast enhanced ultrasound market?

What are the factors driving the contrast enhanced ultrasound market?