The global contrast media market size was valued at USD 4.04 billion in 2021 and is expected to expand at a compound annual growth rate (CAGR) of 3.33% from 2022 to 2030. The growing prevalence of complex comorbidities and long-term diseases has led to an increase in diagnostic imaging tests, including ultrasound, X-rays, and advanced imaging technology such as MRI & CT scans. For instance, in November 2019, GE Healthcare received the U.S. FDA approval for Clariscan, a contrast agent used for macrocyclic MRI. These products help in identifying the need for perioperative scans prior to surgeries and treatment in interventional procedures, which is likely to boost the market growth. According to the National Health Council, in 2020, nearly 157 million people in the U.S. were affected by chronic diseases, out of which around 81 million had multiple conditions, which is indicative of a high incidence of chronic conditions. 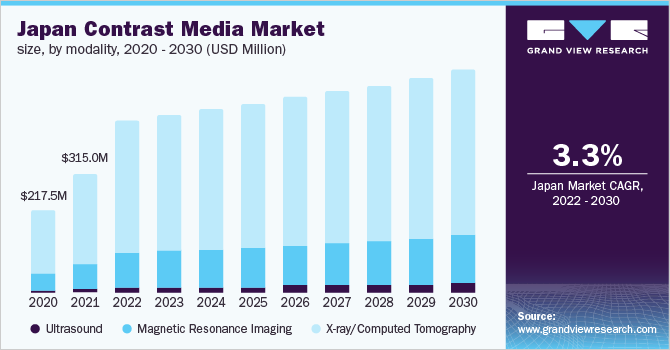 Furthermore, according to a report by the American Heart Association, the incidence of heart failure is increasing in the U.S., and it is one of the leading causes of death in the country. In 2020, approximately 659,000 people died due to cardiovascular diseases in the U.S. By 2030, the number of people with heart diseases is estimated to increase by 46%.

Leading to decreased patient visits to hospitals, the COVID-19 outbreak had a detrimental influence on the contrast media market. As a result of the pandemic, healthcare systems have been severely stressed. Healthcare providers and institutes were ordered to stop performing medical evaluations and elective surgical operations to conserve healthcare resources for COVID-19 patients and combat the spread of the disease. For instance, during the early months of the pandemic, diagnosis of heart illnesses fell by roughly two-thirds over the world, as countries and patients focused on COVID-19. Similarly, screenings for colon, breast, prostate, and lung fell by 75%, 85%, 75%, 74%, and 56%, indicating a revenue drop in 2020.

The American College of Radiology (ACR), which signifies over 40,000 radiologists in the U.S., has issued advice that X-rays and CT scans should not be used as a first-line approach to diagnose or test for COVID-19 since it is exceedingly contagious. As a result, several radiology departments saw a significant decrease in the number of imaging cases. Except for COVID diagnosis, all diagnostic procedures exhibited a considerable fall in 2020, affecting the growth of the contrast media market.

Market players adopt strategies such as mergers & acquisitions and indication extension. Acquisitions aid companies in increasing their presence with wider geographic reach and stronger portfolios. Disease indication extension is popular in this market as it enables firms to gain the confidence of select population subsets. With approvals for specific indications, companies target niche patient cohorts and boost the adoption of products. For instance, in March 2022, the initial single-source photon-counting computed tomography (CT) scanner with a single detector acquired FDA 510(k) approval, according to NeuroLogica Corporation. Additionally, the OmniTom Elite with PCD is capable of producing spectral CT pictures at various energy levels, which is anticipated to boost the market growth in the near future.

Furthermore, the introduction of digital solutions that aid in the management of contrast agent injection is anticipated to drive market growth. For instance, in 2018, Guerbet launched Contrast&Care 2.0, a digital solution that connects all CT, Cath laboratory, and MRI injectors and has smart reader & connectivity features, enabling users to scan and read data on their smartphones as well as computers.

Based on modality, the X-ray/CT segment held the largest market in 2021 with around 69.53%. X-ray/CT contrast agents help produce high-resolution 3D images of structures. Barium-based and iodinated contrast media are used in X-ray & CT techniques. When barium and iodine contrast agents are administered/injected in the body, they block X-rays and do not allow the rays to pass through. As a result, the appearance of organs, blood vessels, and other body tissues, which temporarily contain barium-based or iodinated contrast agents, changes in images. X-ray and CT are widely used for multiple diseases which are expected to spur the market growth.

The ultrasound segment is anticipated to witness the fastest growth rate over the forecast period. Contrast agents for ultrasound imaging have been developed for visualization of microcirculation in tissue. The agents employed for this modality are generally microbubbles that enhance echogenicity of blood and, hence, visualization and assessment of tissue vascularity, large vessels, & cardiac cavities. Ultrasound contrast agents offer many benefits over alternative imaging modalities which are anticipated to boost the market growth.

Moreover, ultrasonography is preferred in pediatric patients as it requires lower ionizing radiation and is a well-known modality for diagnoses of several diseases, such as heart, liver, and kidney. However, despite its high preference, the ultrasound contrast agents segment holds a smaller market share. This can be attributed to the extended applications of second-generation ultrasound contrast agents that have recently been approved by regulatory agencies, such as the U.S. FDA.

They are used to enhance visualization of the GI tract, internal organs, arteries & veins, soft tissues, and the brain. Iodinated contrasted media are widely applicable in a broad number of indications including neurological, nephrological, gastrointestinal, cardiovascular, and musculoskeletal disorders as well as cancer.

The microbubble contrast media segment is anticipated to witness the fastest growth rate over the forecast period. Microbubble contrast media are minute bubbles of an injectable gas. They are most often administered for ultrasound imaging of the heart. Contrast agents for ultrasound imaging have been developed for the visualization of micro-circulation in tissue. They enhance the echogenicity of blood, and hence, enhance visualization and assessment of tissue vascularity, large vessels, and cardiac cavities.

The neurological disorder segment held the largest market share in 2021 with around 29.45%. Diagnostic evaluation of CNS for neurological disorders boosts the adoption of MRI contrast media, as they provide better images of neural structures than CT. For visualization of demyelinated, inflammatory, and neoplastic lesions, gadolinium-based contrast agents are utilized.

Gadolinium-based contrast agents are used in one in three MRIs to enhance image clarity, which improves diagnostic accuracy by enhancing the visibility of blood vessels, inflammation, and tumors. Gadavist, Dotarem, and Prohance are the most widely used macrocyclic gadolinium-based contrast agents used in the diagnosis of neurological disorders in the U.S. They are indicated for intravenous use in adults and pediatric patients, 2 years or above, to visualize lesions with abnormal vascularity in the brain, spine, and associated tissues. 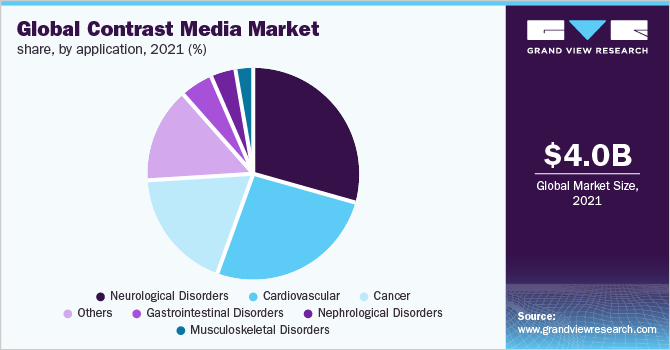 They are indicated in patients with suboptimal echocardiograms for opacifying the left ventricle and improving the left ventricular endocardial border delineation. Ultrasound contrast media, Definity, Optison, and Lumason are no longer contraindicated for patients presenting with cardiac shunts in the U.S.

North America dominated the contrast media market in 2021 with around 44.44%, due to various strategic initiatives undertaken by key manufacturers targeting niche patient subsets in this space are projected to accelerate the market growth. Key players in the market include Bayer, GE Healthcare, Guerbet, Lantheus, and Bracco Diagnostics.

The presence of well-established healthcare facilities and easy availability of advanced technologies as well as high demand for diagnostic procedures, owing to disease screening initiatives and disease management, in this region is expected to increase the number of inpatient examinations. However, healthcare reforms for implementing criteria for appropriate use to curb unnecessary procedures may decrease the number of procedures.

Asia Pacific also held a substantial market share in 2021. This can be attributed to the presence of established local as well as foreign manufacturers in the region. For instance, General Electric Pharmaceuticals (Shanghai) Co., Ltd. is a branch of GE that diagnostic drugs (CT/MR contrast media) in China and is one of the world's largest contrast media production bases of GE Healthcare. This factor is anticipated to continue driving the regional market growth.

Key players are involved in adopting strategies such as acquisitions & mergers, partnerships, and launching new products to strengthen their foothold in the contrast media market.

Key players are entering into mergers & acquisitions to increase their market share and customer base across the globe. For instance, in December 2021, the previously announced GE Healthcare acquisition of BK Medical has been finalized. With this acquisition, GE Healthcare enhances its pre-and post-operative ultrasound capabilities to encompass real-time surgical viewing, a fast-growing and relatively new discipline. Some prominent players in the global contrast media market include:

This report forecasts revenue growth and provides an analysis on the latest trends in each of the sub-segments from 2017 to 2030. For the purpose of this study, Grand View Research has segmented the global contrast media market report on the basis of type, modality, product type, application, route of administration, end use and region:

How big is the contrast media market?

What is the contrast media market growth?

Which segment accounted for the largest contrast media market share?

b. North America dominated the contrast media market with a share of 44.44% in 2021. This is attributable to the presence of well-established healthcare facilities, availability of advanced technologies together, and demand for diagnostic procedures.

Who are the key players in the contrast media market?

What are the factors driving the contrast media market?

b. Key factors that are driving the contrast media market growth include the increasing prevalence of long-term diseases and complex comorbidities, technological advancement, and label expansions.