The global cranial clamps market size was valued at USD 222.39 million in 2018 and is anticipated to exhibit a CAGR of 4.7% over the forecast period. Increasing incidence of Traumatic Brain Injuries (TBIs) and Central Nervous System (CNS) and brain tumors is driving the growth.

Cranial clamps are medical devices used to stabilize the head during skull surgeries. These devices are used as a holder to balance the patient’s head for better access while performing neurosurgeries. Cranial clamps are used in various procedures such as craniotomy for tumor removal; head trauma injuries; cerebrovascular disorders such as aneurysms; and neurodegenerative disorders such as Parkinson's disease or epilepsy. 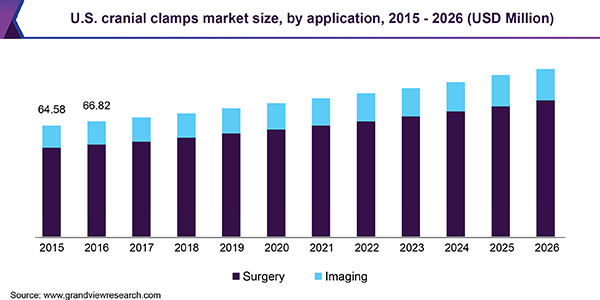 Cranial clamps are also used in medical imaging technologies, such as Magnetic Resonance Imaging (MRI), skull radiography, and Computed Tomography (CT) scan. In addition, the rising prevalence of brain tumors and pediatric disorders such as hydrocephalus are a few factors driving the cranial clamps market growth.

In addition, the increasing number of neurosurgeries owing to growing head trauma injuries, pediatric disorders, and neurodegenerative diseases are other few factors driving the overall market growth. According to the Center for Disease Control and Prevention (CDC), TBI is a major cause of fatality in the U.S. since 2006, and its incidence is increasing by 53% every year.

As per the American Association of Neurosurgical Surgeons, in the U.S., 1.7 million TBI cases are diagnosed every year. According to the AFFiRiS AG, due to Parkinson’s disease 7-10 million people are suffering from life-threatening disabilities, such as loss of nerve cells in the brain. Thus, an increasing number of TBI cases and patients suffering from neurodegenerative diseases are increasing the demand for neurosurgeries thereby driving the market growth.

Technological advancements in cranial clamps are another factor expediting market growth. With radiolucent cranial clamps, the image artifacts are getting improved for carrying out the neurosurgical procedure. For instance, MAYFIELD Infinity XR2 Radiolucent Cranial Stabilization system of Integra LifeSciences Holdings Corp. is an advanced radiolucent cranial clamp. This advanced cranial clamp design also provides rigid fixation to keep the patient's head at a constant position during neurosurgical procedures along with the utilization of fluoroscopy, X-ray, and Digital Subtraction Angiography (DSA).

XR2 Radiolucent Cranial Stabilization is a U.S. Food and Drug Administration (FDA) approved and CE mark certified technology. Demand for this technology is increasing as this system helps neurosurgeons perform fluoroscopy during neurosurgeries without compromising the image quality. Thus, neurosurgeons can conduct the procedure effectively.

The surgeries segment dominated the cranial clamps market in 2018 and is expected to expand at the highest CAGR during the forecast period, owing to an increasing number of patients suffering from head trauma injuries or TBI, pediatric disorders, and cerebrovascular disorders. Each TBI contributes to a substantial number of deaths which accounts for 34% of overall head injuries as per facts given by the American Association of Neurological Surgeons.

Another factor responsible for surgeries is cerebrovascular disorders which are the most common childhood disorder in the U.S. According to current economic statistics of the Cerebral Palsy Guidance website. In the U.S., approximately 764,000 people are suffering from at least one symptom of cerebral disorders, such as stiff or spastic muscles, speech problems, vision as well as hearing issues, and abnormal movements. Thus, the increasing number of patients suffering from cerebral disorder as well as TBI is expected to drive the market growth.

Based on the patient age demographic, the adult segment dominated the cranial clamps market and is projected to witness the fastest CAGR over the forecast period. The rise in neurological disorders among adult patients is anticipated to drive the segment growth. According to the Lancet journal, neurological disorders are a major cause of death and disability worldwide which has observed a substantial increase in the past 25 years.

According to the American Society of Clinical Oncology (ASCO), in 2019, around 23,820 adults in the U.S. as compared to 3,720 children are estimated to be diagnosed with primary cancerous tumors of the spinal cord and brain. In addition, around 85% to 90% of brain tumors are primary CNS tumors. Thus, the increasing prevalence of brain cancer among adults and the rising incidence of road accidents are a few factors driving the market growth.

In 2018, the hospital segment dominated the market. Patients suffering from neurological complications such as brain damage, trauma, and critical illness are majorly admitted to hospitals as hospitals have skilled neurosurgeons and advanced equipment for treatment. Hospitals provide significant benefits to patients, such as providing them Neurological Intensive Care Units (NICUs) which are majorly concerned with Intracranial Pressure (ICP), management of autonomic, ventilator, and consequences of profound neuromuscular weakness. 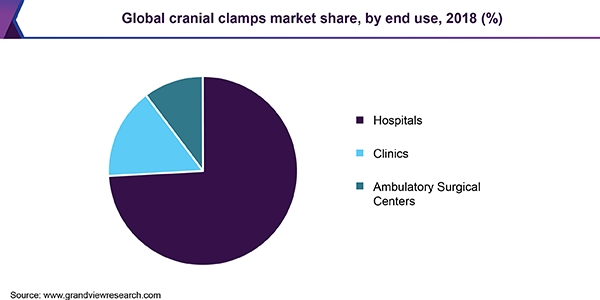 Ambulatory surgical centers are expected to expand at the highest CAGR in the near future, due to the increasing incidence of vehicle accidents and the prevalence of traumatic brain injury that require critical surgeries as the first line of treatment. Ambulatory surgical centers provide diagnosis and treatment facilities efficiently and in a cost-effective manner. An increase in a number of government initiatives in both developed as well as developing countries will further boost the segment growth.

North America dominated the market for cranial clamps in 2018, owing to increasing surgical procedures for tumor removal along with the rising number of patients suffering from neurodegenerative disorders such as Parkinson's disease or epilepsy. Moreover, rapid technological advancements in devices used during neurological surgical procedures are anticipated to further fuel the growth. In addition, according to the Alzheimer's Association, around 1 million Americans in the U.S. are likely to suffer from Parkinson's disease (PD) by 2020. Around 60,000 people in the U.S. are diagnosed with PD each year. Thus, the increasing number of patients suffering from neurodegenerative disorders as well as the presence of innovative market players in this region are contributing to the market growth.

Asia Pacific is expected to register the fastest CAGR in the near future, due to favorable government initiatives, increasing healthcare expenditure, and a rise in the number of skilled neurosurgeons. According to the National Health Portal of India, Brain Tumor Day is observed on the 8th of June every year in India. This day is especially dedicated to spreading awareness which educates people regarding brain tumors and their surgical treatment. Such initiatives are expected to drive the growth of the regional market for cranial clamps in the forthcoming years.

Few of the leading market players include Pro-med instruments GmbH, Integra LifeSciences Corporation, Allen Medical (Hill-rom), B. Braun, Micromar Ind e com, and Eschmann Holdings Ltd (Steris PLC). These key players are focusing on launching innovative cranial clamps, investing in growth strategies, and promoting technological advancements. For instance, Allen Medical includes C-Flex Head Positioning System in its spine system that can be used with cranial clamps or headrests. This technology has precise and easy readjustments for carrying out spine surgical procedures. Such advancements are anticipated to boost the market growth over the forecast period.

This report forecasts revenue growth at global, regional, and country levels and provides an analysis of the latest industry trends in each of the sub-segments from 2015 to 2026. For the purpose of this study, Grand View Research has segmented the global cranial clamps market report on the basis of application, patient, end-use, and region: