The global cyclohexane market size to be valued at USD 32.3 billion by 2025, expanding at a compound annual growth rate (CAGR) of 4.9% during the forecast period. Cyclohexane is an intermediate product, which is used for the production of adipic acid and caprolactam. Increasing applications of cyclohexane in various industries along with the growing demand for nylon products in automotive and engineered plastics are major drivers of the global market growth. The product is also getting traction in food and beverage packaging, textile, and electrical & electronics which initiated several legislative actions and regulations regarding its safe usage. 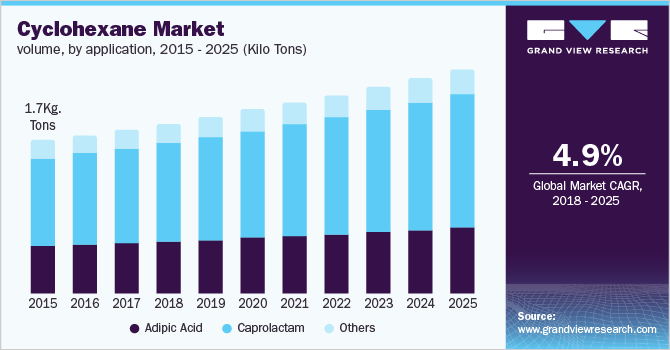 Caprolactam was the largest application of cyclohexane in 2016 and is expected to continue dominating over the forecast period owing to the high demand for nylon 6 production. Major corporations that are dominant in North America and Europe are gradually partnering with manufacturing companies located in Asia Pacific to fulfill the local demand and also to cater their products and services to the high potential markets in Asia Pacific and Latin America. This factor is expected to drive consumption in the respective regions.

Another major factor influencing the growth trend is the increasing preference of end-users owing to the rising consumer disposable income. To meet the growing requirements, manufacturers are constantly upgrading their product portfolios, to fulfill the growing needs of customers.

Depletion of non-renewable resources such as crude oil and increasing environmental concerns have encouraged the development of various ground-breaking sustainable technologies that utilize bio-based raw materials for the production of cyclohexane. In bio-based process, E. Coli bacteria convert sugar into 3-dehydroxyshikimate which is further converted to Cis,cis-muconic acid that gets converted to adipic acid when hydrogenated at high pressure.

Increasing governmental and federal regulations that are likely to restrict conventional processing from non-renewable resources can easily be overcome by innovative sustainable technologies. Most processors are increasingly focusing on sustainable Good Manufacturing Practices (GMPs) and attempting to increase efficiency, conserve resources, and optimally utilize available resources. These initiatives are further expected to boost the global cyclohexane market growth over the forecast period.

Several companies all over the world have invested heavily in recycling of nylon to reduce the dependency on renewable resources and reduce the global pollution level. The growing population coupled with rapid urbanization and industrialization in emerging economies has also driven federal governments to increase their manufacturing spending to cater to the rising demand.

Recently, there has been a growing impetus towards the provision of greater quality products to retain customer loyalty, since low switching costs & lowly differentiated products have reduced supplier power in recent years. Companies are thus actively engaged in product development & research, technological advances, and even strategic collaborations to improve their standing globally. Key manufacturers are importing cyclohexane to reduce reliance on local companies. The pricing and supply paradigm depends on the top manufacturers as they hold a significant share in production. Although, the price of cyclohexane does not depend on raw material since the production cost is much higher than the raw material cost.

The primary driver for the increasing growth rate of market is the usage of nylon products as a catalyst in the textile industry. Nylon 6 and nylon 6.6 are used in making a variety of lightweight and sheer garments due to their high strength, low modulus, and good abrasion resistance. It is extensively used in ladies stockings, sarees, socks, and other garments as well as in the footwear industry from the inside fabric to the outside fabric and even the shoe bottom. As a result of these widespread applications, the market is anticipated to grow substantially over the forecast period.

Furthermore, the expansion and growth of the automobile sector across the globe is another factor driving the industry growth. Nylon 6 resins is used for a variety of automobile applications, such as seat filling and cushioning. Besides, the Nylon filaments are used to make safety hoses, and safety belts in cars. Moreover, multifilament nylon strands are used to reinforce rubbers in tires. Owing to these applications, the market is expected to witness even more lucrative growth opportunities as the use of nylon in automobile production increases.

However, the industry growth is expected to be hampered by rising environmental safety and wildlife protection concerns, as well as the volatility in raw material prices. Government-imposed regulations aimed at reducing pollution are projected to further limit the market's potential growth. The industry growth rate is anticipated to be further restricted by substitutes available on the market, such as phenol, which is used in the manufacture of caprolactam.

The cyclohexane is used to produce adipic acid and caprolactam which are further utilized to manufacture many ends use products such as nylon 6, nylon 66, and others. Nylon being an end-use product can be used to make a thread which can be further transformed to textile and clothing. Caprolactam is the primary feedstock for the manufacturing of nylon 6, although adipic acid is majorly used to produce nylon 66.

Asian plants are operating at maximum capacity which is a considerable force that keeps the global caprolactam prices low. In January 2017, prices hit a two year high of USD 1,830/ton. There has been a more than 30% price reduction in prices post shale gas boom leaving manufacturers bankrupt. In the 2016-2017 period, with manufacturers shutting down production, the prices are showing an increase; however, the prices haven’t reached an optimum level to attain a profit for producers.

It is estimated that the Asian manufacturers might have to bring production down by 50% for a perfect supply-demand balance. The prices in first quarter of 2011 were hovering around USD 1.2-1.4 per Kg as the global crude oil prices were the highest peak resulting in producers operating in low profit as the operating costs were high where energy costs were significantly high.

In the wake of shale gas as the prices crude oil prices decreased, the global tightness index of the prices was somewhere around 0.9-0.8. In the first half of 2013, as the global crude oil prices showed signs of decreasing caprolactam manufacturers were making substantial revenue as their operating to gateway price ratio were balanced.

The global nylon market at its production level is witnessing aggressive acquisitions and mergers. The current scenario depicts that producers of nylon resins are taking into account the low production cost of nylon if backward integration is attained. It resulted in capacity expansion in Asia Pacific, North America, and Europe.

In the current scenario, the majority of the nylon manufacturers are producing caprolactam and nylon resins, therefore positioning themselves at all the stages of the nylon value chain. The global demand for nylon has seen a paradigm shift due to rising awareness among consumers. Nylon 6 emerged as the largest end-use segment and accounted for over 55.8% of the total revenue in 2016. 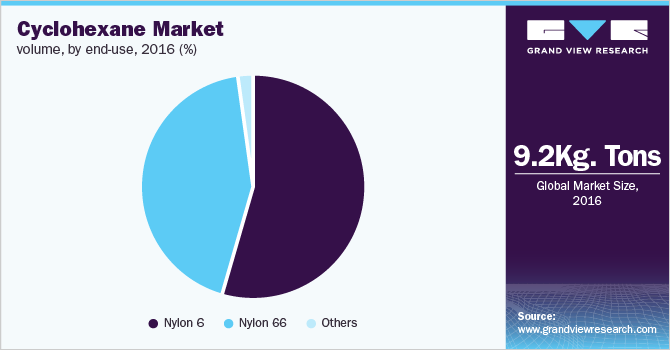 Commercially nylon is manufactured by ring-opening polymerization of caprolactam. Hydrolytic or anionic mechanisms either can fulfill the process. However, Nylon 6 and Nylon 66 are almost produced exclusively by hydrolytic polymerization as it is easier to control and exhibits better adaptation for large scale operations.

The consolidation and oversupply of the nylon supply chain are gradually progressing and will likely show a trend of continuing in the future. Caprolactam capacities, which are the primary feedstock for nylon 6 resins are being concentrated in China since the local Chinese textile accounts for over 33% of the global nylon 6 demand in 2016. This phenomenon has led key players to venture and establishment production facilities in Asia.

Market leaders such as DSM and Honeywell have already invested into parts of the supply chain or have it on their immediate action plan. In early, 2015 DSM engaged in a joint venture with CVC Capital Partner with the establishment name Chemical Invest to position themselves into the heart of the supply chain of the nylon value chain.

The Asia Pacific was leading the cyclohexane consumer; accounted for over 38.3% of the total revenue in 2016. Emerging economies in the region including India and China, are developing economies; undergoing significant economic changes. The growing population and increasing living standards spurred the cyclohexane demand in the area. 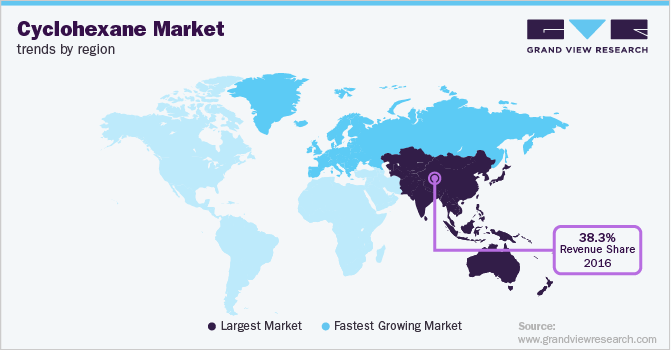 China is the largest producer and consumer of cyclohexane globally. China’s rapid urbanization, supported by strong economic growth resulted in an active cyclohexane market. Due to growing awareness and increasing disposable income, the country is witnessing a shift from traditional to bio-based cyclohexane production.

Europe accounts for over 23.7% of the total global volume in 2016. Growing consumption mainly in the U.S. and China coupled with easy regulations regarding quality are expected to remain key driving factors for the industry. Also, abundant raw material availability is also expected to drive the cyclohexane demand over the forecast period.

The global market of cyclohexane is highly competitive and fairly concentrated, with the top six companies accounting for the maximum share of the global production in 2016.

Application development and customized applications are expected to be a key parameters for being competitive, with frequent mergers and acquisitions being undertaken to diversify the application portfolio and gain market share.

Some of the prominent players in the industry include:

This report forecasts revenue growth at global, regional & country levels and provides an analysis on the industry trends in each of the sub-segments from 2014 to 2025. For the purpose of this study, Grand View Research has segmented the global cyclohexane market on the basis of application, end-use, and region: 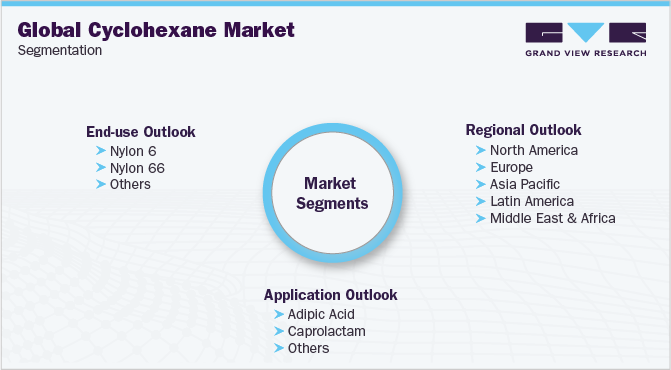