The global dashboard camera market size was valued at USD 2.8 billion in 2019, with an estimated 36.1 million units of dashboard cameras sold in the same year. The industry is expected to witness an increase in the demand for installation of such cameras in commercial and passenger vehicles owing to the rise in sales of new vehicles. Rising demand for vehicular safety and favorable government initiatives are some key factors, expected to fuel the market growth. 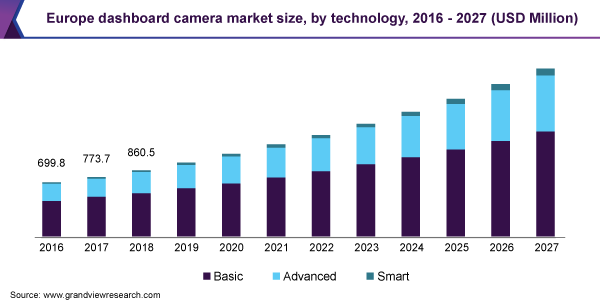 Growing inclination of motorists toward the usage of such cameras to seek added legal protection in case of road mishaps and accidents is expected to drive the demand for dashboard cameras worldwide. Frequent news occurrences showing the footage of crashes and road accidents captured by such devices has significantly helped to increase general public awareness regarding the benefits of car DVRs.

Dashboard cameras are increasingly becoming popular with drivers across the globe. This technology is finding home in many commercial as well as personal vehicles, as it empowers the driver to take control of on-road security and allows to record incidents such as collisions, theft, and vandalism. The camera footages obtained from dashboard cameras are now being accepted for proving liability and insurance claims. Insurance companies are promoting the adoption of dashboard cameras by providing discounts on insurance premiums with the aim to fight against false insurance claims.

Some insurance companies are offering customers up to 15% discount on monthly premiums for using dashboard cameras in their vehicles. This has significantly increased the popularity of dashcams across the world. Adoption of dashcams is expected to soar in the North American region over the forecast period. In January 2017, New York (NY) State proposed a Senate Bill (S438), under which the non-commercial vehicle owners will get approximately 5% discount on premium for using a dashcam.

Law enforcement agencies across the world traditionally used dashboard cameras and car DVRs. Nevertheless, as per the recent trends, they are increasingly being installed in both passenger vehicles and commercial fleets. A crucial factor driving the demand for dashboard cameras is the increase in the number of fraudulent insurance claims and medical compensation by means of fake car accidents. Majority of insurance companies have now started accepting dashboard camera footage to resolve disputes regarding insurance claims.

Based on the technology implemented, the dashboard camera market is segmented into basic, advanced, and smart car DVRs. The basic dash cam segment dominated the overall market in 2019 and is anticipated to retain its dominance over the forecast period. Low cost and easy installation of such devices are projected to drive the adoption of basic dashboard cameras.

The smart dash cam segment is anticipated to experience the fastest growth over the next seven years. Escalating demand for advanced driver assistance functionalities, such as seamless wireless connectivity, lane departure warning systems, blind-spot detection, and collision avoidance systems, are anticipated to offer considerable potential for the growth of smart dashboard cameras over the forecast period. The key global dash cam manufacturers are involved in the development and commercialization of innovative dashboard cameras, which offer the capability to be connected with various complementary technologies such as vehicle data monitoring and telematics.

On the basis of product type, the market is categorized into 1-channel, 2-channel, and rearview dashboard cameras. 1-channel (single channel) dashboard cameras are mounted on the vehicle’s windshield or on the dashboard and record the road ahead of the vehicle. This type of camera only records video in front of the dashcam. The segment is expected to emerge as the highest-revenue generating dash cam type over the forecast period. The global market size for this segment was estimated to exceed USD 2.00 billion in 2019. There has been a substantial reduction in the average selling price of these types of dash cams, which in turn is anticipated to propel the market growth over the next seven years.

Prominent players are now concentrating on enhancing the convenience and user-friendliness of car DVRs by incorporating additional features, such as the inclusion of night vision cameras, high-endurance battery life, and expandable storage capacity in their offerings. The commercial users of such cameras, such as trucking companies and taxi operators, widely prefer 2-channel variants over 1-channel ones as the latter cannot be upgraded by adding an external secondary unit to capture the interior footage of the vehicle.

Projected to expand at a CAGR of around 16%, in terms of volume over the forecast period, the global demand for full HD and 4K dash cams was estimated to be more than10 million units in 2019 and is expected to account for over 30% of the demand share by 2027. Full HD and 4K dashboard cameras are able to record video footage at a significantly high resolution to provide a video quality output, which could be regarded as admissible evidence by insurance companies, police, and legal authorities. As a result, an increasing number of motorists, both individuals, and commercial fleet operators, are replacing their low-resolution DVRs with Full HD or higher-resolution cameras, eventually driving the global demand for higher resolution dash cams.

The SD and HD segment dominated the overall market in 2019 and is poised to maintain its dominance over the next seven years. SD cameras typically record low-resolution videos, which enables them to record longer loops of videos in restricted memory sizes. The market for SD and HD dashboard cameras is projected to reach USD 4.4 billion by 2027. Vendors across the globe are developing technologically advanced dash cams, which offer dual recording, up to 4K videos, crash recording, GPS, Wi-Fi, large LCD, TV output, 128 GB SD card support, and built-in microphone and speaker.

On the basis of application, the market is segmented into commercial vehicles and personal vehicles. The personal vehicle segment is expected to remain the leading segment over the forecast period. Demand in personal vehicles is increasing with the presence of standard laws and regulations on road safety in several economies worldwide coupled with increasing awareness of the benefits associated with dashcams. The integration of dashcams with several driver-assistance functionalities by vehicle manufacturers in various countries across the world is likely to help them to gain a significant edge over the others.

The integration of dashcams with several driver-assistance functionalities by vehicle manufacturers in various countries across the world is likely to their preference amongst personal vehicle owners. The substantial impetus by transport authorities to exhort commercial and private vehicle owners to adopt in-vehicle cameras is expected to provide a robust thrust to the demand for these cameras, especially in countries where the use of these cameras is considered legal. 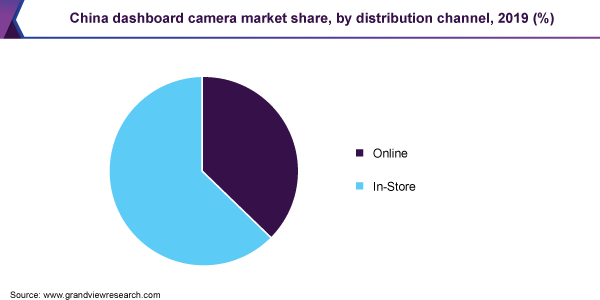 Europe accounted for the largest share of the overall global shipments in 2019. The regional demand was estimated to be over 14 million units in the same year. The growth in Europe is expected to be surpassed by Asia Pacific in the mid of 2023. Car DVRs have gained huge acceptance among the Russians motorists as a device used for protection against tricksters who throw themselves onto the windscreens of slow-moving cars with the objective to claim false insurance money.

The demand across North America is expected to witness considerable growth over the time period as ride-hailing service providers, such as Lyft and Uber, and the drivers are progressively recognizing the advantages of mounting such devices in their vehicles, in an attempt to protect themselves against false accusations or bad reviews from the passengers. Dashboard cameras are legal in most of the states across the region, particularly the U.S. Many truck and cab drivers in the region have started using dashboard cameras over the last couple of years because of the protection offered by these cameras to their livelihood.

Asia Pacific is expected to expand at the highest CAGR of over 15.0% from 2020 to 2027 due to the increasing popularity and adoption of these cameras among the motorists. Insurance companies in some countries across the region have started providing premium discounts to motorists having dashboard cameras in their vehicles. Dashboard cameras are expected to gain high acceptance in this region over the forecast period as they act as invaluable evidence, which can safeguard the user legally as well as financially.

Leading manufacturers have been exploring numerous options for expanding the storage capacities in order to store as much video data as possible. One of the options is adoption of the Secure Digital Extended Capacity (SDXC) format, which is capable of offering up to 2 terabytes (2048 GB) storage space. Additionally, manufacturers have stressed upon integrating the cameras with Wide Dynamic Range (WDR) capability for improving video quality in scenarios where light intensity varies drastically, such as viewing reflective license plates against a dark background at night, thereby increasing the ability of the DVRs to reproduce details in such situations.

Majority of the dashboard camera manufacturers have either operational manufacturing facilities or are headquartered in the Asia Pacific, typically in China, Taiwan, and South Korea. Car sharing/ride-sharing service providers are beginning to install car DVRs in their vehicles owing to the increasing need for safety and security amongst the commercial fleet operators and service providers. As a result, the key market players have now started targeting the commercial markets as they foresee significant rise in growth opportunities.

This report forecasts revenue and volume growth at the global, regional, and country levels and provides an analysis of the latest industry trends in each of the sub-segments from 2016 to 2027. For the purpose of this study, Grand View Research has segmented the global dashboard camera market report on the basis of technology, product, video quality, application, distribution channel, and region:

How big is the dashboard camera market?

What is the dashboard camera market growth?

Which segment accounted for the largest dashboard camera market share?

b. Europe dominated the dashboard camera market with a share of 34.1% in 2019. This is attributable to the fact that these devices have gained huge acceptance among Russian motorists for protection against tricksters who throw themselves onto the windscreens of slow-moving cars with the objective to claim false insurance money.

Who are the key players in dashboard camera market?

What are the factors driving the dashboard camera market?

b. Key factors that are driving the dashboard camera market growth include the rise in sales of new vehicles, growing demand for vehicular safety, and favorable government initiatives worldwide.