The global data center construction market size was valued at USD 64.20 billion in 2019 and is expected to grow at a compound annual growth rate (CAGR) of 8.5% from 2020 to 2027. Data center construction is associated with building a facility on a raised floor and is used to host computer systems and IT equipment. Rising internet penetration has resulted in increased usage of interconnected devices in public and private spaces. These factors have positively created a demand for data centers in order to store and process large amounts of data. Furthermore, the adoption of cloud computing by small and medium enterprises is expected to fuel market growth. The market is witnessing continuous investments from the colocation service providers, telecommunication service provides, and hyperscale service providers. Companies such as Facebook, Google, Inc., and Amazon.com have invested significantly in the past years to establish hyperscale data centers. 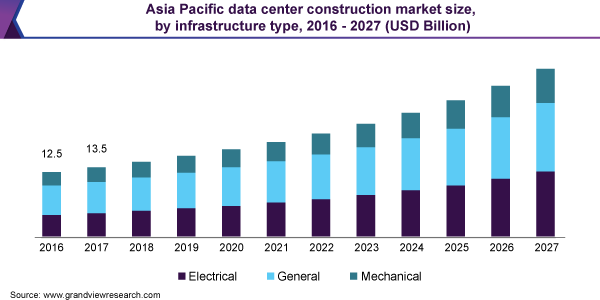 For instance, in September 2018, Facebook invested USD 1.4 billion in an 11 storied data center to be built in Singapore, which will be operational by 2022. Moreover, a hyperscale data center is believed to offer improvements in cooling efficiency by optimizing airflow through the architecture and is equipped with redundant power back up. Additionally, it facilitates a balanced workload across servers by continuously monitoring and distributing high-intensity workloads uniformly. These factors have provoked companies to invest in hyper scale data center construction, thus boosting the market growth.

Data centers generate a large amount of heat during their operations. Thus, the necessity to keep the data center environment cool as the excess amount of heat generated from the processors can damage the servers and other systems, which may lead to a discontinued flow of information or data loss, is expected to fuel the data center cooling market growth in India over the next few years. Liquid cooling is gaining popularity owing to increased workloads and high density storage servers, which generate a large amount of heat. Advanced cooling methods such as liquid immersion and direct chip liquid cooling offer energy efficient ways by providing improved heat transfer among the data center racks, thus driving the market.

Data centers are power-intensive structures and they consume 205 terawatt-hours of electricity, which is 1% of all the electricity consumed all over the world. As such, services providers and companies are focused on building energy efficient data centers, which can be run through renewable energy. State government bodies provide different types of incentives and rebates to encourage the construction of energy efficient data centers. For example, the upcoming construction of Google’s data center project in New Albany included an incentive package of 100% property tax abatement for 15 years offered by the state of Ohio. Furthermore, data center projects that are renewable up to 40 years and worth USD 43.5 Billion have been approved of 100% exemption on the sales tax of 15 years by the Ohio tax credit authority. Such incentive schemes are anticipated to bolster market growth.

General infrastructure type dominated the market with a share of 43.8% in 2019. This is attributed to rising construction of mega data centers and wages of laborers employed. Furthermore, this includes the expenses incurred in architectural planning, building permits, and local taxes. The general segment also comprises installation and commissioning services, flooring, windows, doors, internal frames, security management systems, and more. This growth has been attributed to the security concerns related to loss and theft of data, which has propelled the data center manufacturers to invest in installing advanced security infrastructures.

The electrical infrastructure type segment is projected to expand at the highest CAGR during the forecast period. This is attributed to technological advancements to increase the efficiency of electrical equipment. Addition of features related to continuous monitoring of power usage and making systems more redundant has considerably increased the cost of electrical equipment, which is expected to fuel the growth of this segment. The mechanical infrastructure type segment is expected to witness steady growth over the forecast period owing to the developments of cooling solutions to ensure maximum efficiency.

IT and telecom dominated the market with a share of 38.69% in 2019 and is anticipated to witness the fastest growth over the forecast period. This is attributed to the extensive use of data centers in this sector for storing a large amount of data generated from heavy usage of internet and high penetration of mobiles. The construction of hyperscale data center and edge data centers in the IT sector is expected to boom owing to increased demand for advanced facilities to manage data traffic. Furthermore, telecom service providers are expanding their broadband and telecom networks to improve connectivity, which is expected to fuel the demand for data center constructions in this sector.

BFSI emerged the second largest segment in 2019 owing to the importance of data storage in this industry. The segment is driven by a rise in the number of daily financial transactions due to growing population, which generates a large volume of data. Moreover, banks and financial institutions are focusing on providing access to their services to people on their smartphones, which is expected to increase demand for data centers for managing data. The healthcare sector will witness steady growth owing to increasing need for storing patient and health insurance data.

Tier 3 standard dominated the market with a share of 42.3% in 2019. This is attributed to increasing need for redundant components for critical applications. The tier standards are specified based on the type of data center's architecture and the site infrastructure. Several data centers projects in the developing economies like Asia Pacific, Middle East, and Latin America fall under the tier 3 category as they aim to move on from tier 2 architecture. While tier 1 market faces a challenge to find funding from investors, tier 2 data centers may maintain stable growth in order to meet the criteria for edge data centers service providers. 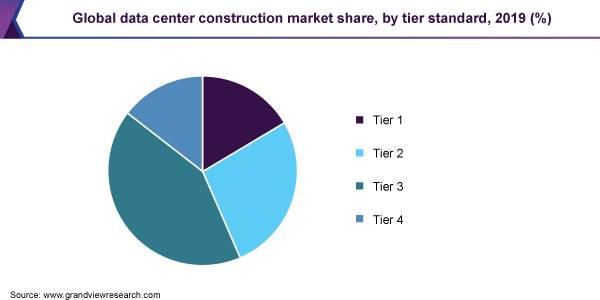 The tier 4 segment is expected to expand at the highest CAGR of 10.6% during the forecast period owing to the rapid increase in the construction of hyperscale data centers. The tier 4 data centers are highly redundant and comprise more efficient cooling systems. Furthermore, companies like Google, Inc., Apple Inc., Facebook, and Amazon.com, along with the service providers, have been significantly investing in building mega data centers, which is expected to boost the growth of the tier 4 segment. For instance, in October 2019, Equinix, Inc., invested more than USD 1 billion and established a joint venture with GIC Private Limited from Singapore. This joint venture will be focused on the development of hyperscale data centers across Europe.

North America dominated the market for data center construction with a share of 38.0% in 2019. This is attributed to rising investment in mega data center projects. For instance, in Dec 2018, Apple Inc. announced its plan to invest USD 10 billion in data centers over the next five years to set up a new 133-acre facility in Austin, Texas. Global data protection regulation was implemented across Europe in May 2018 to secure personal data stored on the data center servers owing to which hyperscale service providers have witnessed a rapid expansion of their cloud services across Europe, thereby directly contributing to the increase in construction of data centers.

Asia Pacific is expected to expand at the highest CAGR of 9.8% over the forecast period. This is attributed to the continued investment from the cloud service providers and hyperscalers. Additionally, telecommunication providers are establishing partnerships with service providers for the implementation of 5G services in several countries, which is contributing to the construction of edge data centers. Furthermore, rising penetration of smartphones has increased the popularity of internet-based services and social media platforms, which has increased the need for data storage, which, in turn, contributing to the development and construction of data centers.

The market is highly consolidated and all the established players are trying to sustain their market position. Service providers are focused on making strategic investments and are engaged in mergers and acquisitions. For instance, in July 2019, Princeton Digital Group, based in Singapore, acquired 70% of stakes in PT XL Axiata Tbk’s data center business and formed a new joint venture company, Princeton Digital Group Data Centers (PGDC). This joint venture is expected to drive Princeton Business Group’s business in Indonesia.

Similarly, several market players are working with the clients to introduce new techniques for making the data centers more efficient and advanced. For instance, Nortek Air Solutions, a manufacturer of commercial HVAC systems, together with Facebook, co-developed a new technology for data center cooling. The new technology called StatePoint Liquid Cooling provides direct evaporative cooling using outside air, thus making data centers more water and energy efficient. In April 2019, Facebook announced that it will deploy this technology in the expansion of its data center in Clonee, Ireland. Some of the prominent players operating in the data center construction market include:

The report forecasts revenue growth at the global, regional, and country levels and provides an analysis of the latest industry trends and opportunities in each of the sub-segments from 2016 to 2027. For the purpose of this study, Grand View Research has segmented the global data center construction market report based on infrastructure type, tier standard, end use, and region:

How big is the data center construction market?

What is the data center construction market growth?

b. North America region dominated the data center construction market with a share of 38.01% in 2019. This is attributable to investments made for mega data center projects.

Who are the key players in data center construction market?

What are the factors driving the data center construction market?

b. Key factors that are driving the market growth include increasing internet usage, high adoption of cloud computing, and rising investment in hyperscale data centers.