The global deep brain stimulation in parkinson's disease market size to be valued at USD 1.42 billion by 2028 and is expected to grow at a compound annual growth rate (CAGR) of 8.5% during the forecast period. Increasing incidence of neurological disorders, such as Parkinson’s disease (PD), growing awareness about the deep brain stimulation in PD, and supportive government policies and laws of the countries are expected to drive the market. Increasing prevalence of Parkinson’s disease is a high-impact rendering driver for the deep brain stimulators market.PD is the second most common neurodegenerative disorder after Alzheimer’s disease. According to Parkinson’s Foundation 2016 report, more than 10 million people globally are living with PD, whereas as per the statistics of Parkinson’s UK, in 2020, more than 145,000 people are living with Parkinson's disease in the U.K. 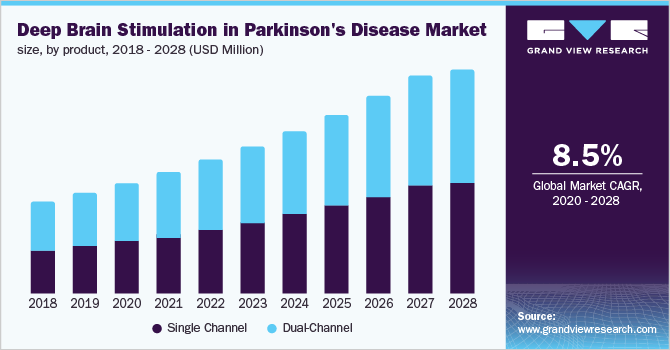 Deep brain stimulation devices have been observed to be greatly effective in controlling the tremors associated with PD. They provide electrical stimulation to the basal ganglia that result in suppressed neuronal activity, which is generally spontaneous in patients suffering from PD, thereby boosting the market growth during the forecast period. Moreover, the aging population is more prone to Parkinson’s disease. People suffering from Parkinson’s disease are not able to release enough dopamine (which helps regulate the movement) in the brain, which leads to tremors, walking problems, and stiffness among other conditions. As per the Centers for Disease Control and Prevention (CDC), PD is largely diagnosed in people over the age of 60 and it is projected that PD affects 1% of the population over the age of 60 to 4% by age 80. Thus, the growing elderly population is majorly driving the market.

In addition, technological advancements in deep brain stimulator devices, such as robot-assisted implantation, improved microelectrode designs, multi-target stimulation, rechargeable implantable pulse generators (IPGs), personalized directed programming, and MRI, are anticipated to raise the demand for deep brain stimulators over the forecast period. For instance, during traditional surgery, DBS current is delivered through a 4-contact lead with cylindrical electrodes piled one above the other. Whereas, at present, recent improvised lead designs, including an 8 or 16-contact electrode, are used to deliver current over larger regions and multiple targets.

Thus, continuous product innovation and development in DBS devices by key players and recommendations by the neurologists and PD-specialized neurologists are further leading to the growth of this market.

Countries such as the U.S. and Canada have witnessed a high prevalence of neurological disorders in recent years. For instance, according to Parkinson’s Foundation, around one million people in the U.S. will be living with PD till 2020, which is more than the combined number of people living with Lou Gehrig’s disease, multiple sclerosis, and muscular dystrophy. In addition, around 60,000 people in the U.S. are diagnosed with PD every year.

Furthermore, an increase in government funding and initiatives for raising awareness about Parkinson’s disease (PD) is expected to drive the demand for deep brain stimulators. For instance, in 2015, Parkinson’s Foundation funded more than 40 research projects for PD. Additionally, the presence of major competitors, the availability of sophisticated healthcare infrastructure, and supportive government initiatives are responsible for the market growth in such countries. For instance, the National Institute of Neurological Disorder and Stroke (NINDS) supports research activities related to DBS for determining its safety and effectiveness in the treatment of PD.

Moreover, increasing incidence of Parkinson’s disease in some of the developed and developing countries has driven the launch of technologically advanced products in the market. For instance, in 2020, the U.S. FDA approved Abbott’s Infinity DBS system for targeted stimulation of internal globus pallidus, a new area of the brain, which is associated with symptoms of PD. Market players are making constant efforts for introducing technologically advanced products in the market. For instance, in January 2019, Boston Scientific Corporation unveiled the Vercise PC & Vercise Gevia DBS Systems, including Vercise Cartesia Directional Lead. This technology allows physicians to control the direction, shape, and position of electrical stimulation to monitor the progression of Parkinson's disease through customized therapy.

Advances in the electrode design of deep brain stimulation devices for Parkinson's disease are also likely to provide lucrative market opportunities. Thin-film technology, high-resolution electrodes, and other advancements enable the development of multi-contact electrodes that become flexible when required increasing the demand for this market.

The expansion of deep brain stimulation is projected to be hampered by the high cost of surgery and delays in product approvals from various regulatory agencies. The deep brain stimulation industry is expected to face challenges due to a shortage of experienced and trained professionals, thus, resulting in a market limitation during the forecast period.

Based on the product, the market is segmented into single channel and dual channel. The dual-channel segment dominated the market with a share of 57.2% in 2019. Dual-channel DBS offers the best overall support, exhibits greater effectiveness in reducing patient tremors, enhances the quality of life, and is highly preferred by neurosurgeons. Thus, benefits offered by dual-channel deep brain stimulation are expected to fuel the segment growth.

On the basis of end-use, the market is segmented into hospitals, neurology clinics, research centers, and ambulatory surgical centers. The hospitals segment dominated the overall market with a share of 52.1% in 2019 owing to an increase in the number of DBS surgeries performed in hospitals and a surge in prevalence of Parkinson’s disease. Moreover, the use of technologically advanced equipment in intensive care units (ICUs) and operation theaters, an increasing number of hospitals worldwide, and government funding to the hospitals are further boosting the segment growth. 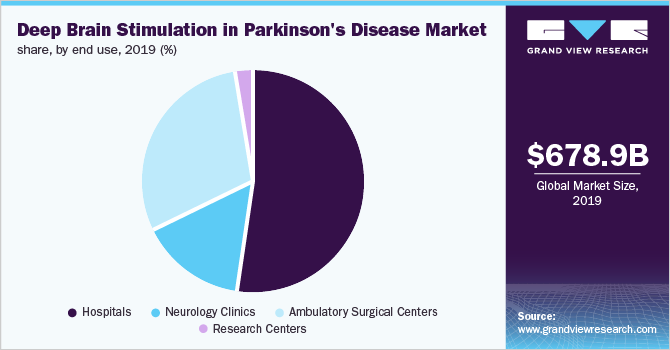 Ambulatory surgical centers are expected to expand at the highest CAGR of 8.3% from 2020 to 2028 owing to the several advantages offered by ASCs, such as shorter procedure time and same-day discharge as compared to the hospitals. Moreover, most the neurosurgeries can now be performed at ASCs as surgical procedures turn out to be more advanced and less invasive. Thus, the growth of the ASCs segment is majorly attributed to shorter procedure time, low cost, and ongoing advancements in minimally invasive surgical techniques.

North America dominated the market with a share of 52.3% in 2019 owing to an increase in the prevalence of psychological disorders, rise in awareness about treatments, availability of highly skilled physicians, and presence of well-established healthcare facilities. Furthermore, the rising adoption of technologically advanced medical devices and a rise in the demand for minimally invasive procedures are expected to boost the growth of the DBS devices market in this region. In addition, increasing private research funding for the R&D of innovative devices and surgical procedures is positively influencing the market growth. 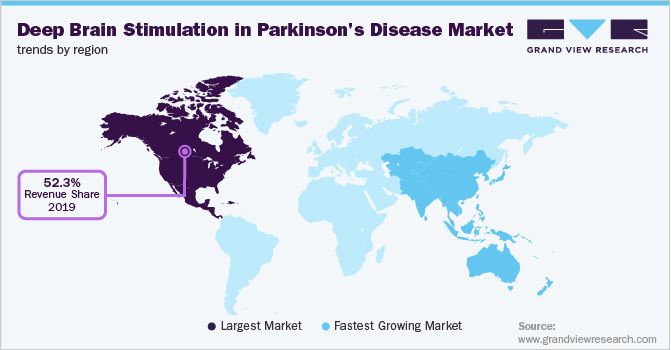 Asia Pacific is expected to expand at the highest CAGR of 9.6% from 2020 to 2028 owing to various factors such as the increasing prevalence of Parkinson’s disease, growing neurosurgical capabilities, increasing affordability, and rising awareness programs about deep brain stimulation treatment. Moreover, increasing initiatives being undertaken by neurosurgeons and neurology clinics to raise awareness about deep brain stimulation are contributing to market growth.

Companies are focusing on research and development to develop technologically advanced products to gain a competitive edge in the market. For instance, in January 2020, Abbott’s Infinity DBS system secured expanded indication approval from the U.S. Food and Drug Administration (FDA) for the treatment of Parkinson's disease. This system will allow targeting patients' specific area of the brain called internal globus pallidus (GPi), which is associated with Parkinson's disease symptoms. Moreover, in October 2019, Medtronic launched its advanced Activa patient programmer technology for DBS therapy in the U.S. at the Samsung Developers Conference. This technology offers therapy management at home for patients with Parkinson’s disease, via Samsung smartphones. These advancements in the area of DBS in Parkinson’s disease market are anticipated to boost the market growth over the forecast period.

Companies are engaging in partnerships, mergers, and acquisitions to strengthen their product portfolio, expand manufacturing capacities, and provide competitive differentiation. For instance, in January 2017, Abbott acquired St. Jude Medical with an aim to strengthen its position in therapeutic areas, such as moment disorders, coronary heart diseases, and chronic pain.

Some prominent players in the deep brain stimulation in Parkinson's disease market are:

This report forecasts revenue growth at the global, regional, and country levels and provides an analysis on the latest industry trends and opportunities in each of the sub-segments from 2016 to 2028. For the purpose of this study, Grand View Research has segmented the global DBS in Parkinson’s disease market report on the basis of product, end-use, and region: 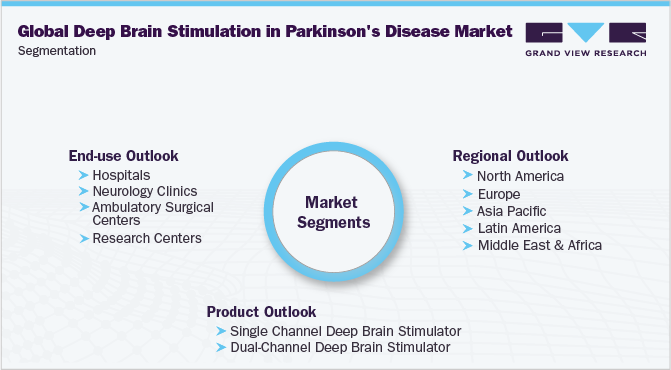 How big is the deep brain stimulation in Parkinson's disease market?

b. The global deep brain stimulation in Parkinsonâ€™s disease market size was estimated at USD 678.9 million in 2019 and is expected to reach USD 739.7 million in 2020.

What is the deep brain stimulation in Parkinson's disease market growth?

b. North America dominated the deep brain stimulation in Parkinsonâ€™s disease market with a share of 52.3% in 2019. This is attributable to the increase in prevalence of psychological disorders, rise in awareness about treatments, availability of highly skilled physicians, and the presence of well-established healthcare facilities.

Who are the key players in deep brain stimulation in Parkinson's disease market?

b. Some of the key players operating in the deep brain stimulation in Parkinsonâ€™s disease market include Medtronic, Abbott, and Boston Scientific Corporation.

What are the factors driving the deep brain stimulation in Parkinson's disease market?

b. Key factors that are driving the market growth include increasing incidence of neurological disorders such as Parkinsonâ€™s disease (PD), growing awareness about the deep brain stimulation in PD, and supportive government policies and laws of the countries.