The global diaphragm pump market size was valued at USD 4.76 billion in 2017 and is estimated to register a CAGR of 5.5% during the forecast years. Rise in investments in water treatment facilities and oil and gas industry are expected to be the key factors driving the global market over the estimated period. Increasing demand for fresh water as a result of growing population along with rapid industrialization and urbanization has amplified the market growth in emerging regions. 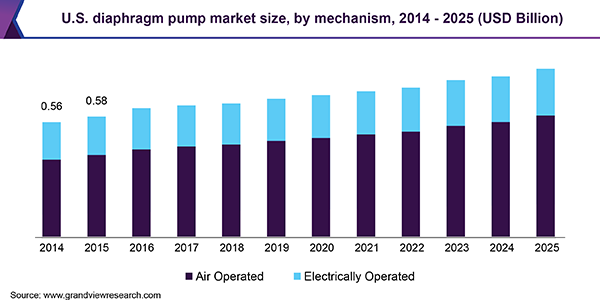 Increasing activities in onshore and offshore exploration in the oil and gas industry across various regions, owing to high consumption of energy fuels, are anticipated to augment market growth in this sector over the next few years. In 2016, the U.S. Department of Energy (DOE) introduced new energy conservation standards for pumps, with a view to conserve substantial volumes of energy while being technically viable and economically acceptable.

Pump manufacturers in the region have been instructed to be compliant with the new regulations by 2020. Due to these changes in standards, manufacturers are focusing on developing highly-efficient products, which, in turn, will have a positive impact on the growth of diaphragm pump industry.

Positive displacement pump displaces the fluid at constant flow despite changes in the counter pressure. Diaphragm pumps are reciprocating positive displacement pumps used to transfer liquids. They are manufactured using different methods depending on the mechanism and operational requirements of end use applications. These devices typically include a diaphragm and chamber, as well as suction and discharge check valves, to prevent backflow.

It can be single acting or double acting. The market is led by double acting segment and it was valued at USD 3.82 billion in 2017. These products use two diaphragms, which reciprocate backward and forward. One of the diaphragms forces fluid in the chamber while the other forces liquid in the discharge line. The diaphragms work as a parting wall between the air and the liquid.

On the basis of mechanism, the global diaphragm pump market has been segmented into air operated and electrically operated pumps. Air operated segment accounted for the highest share of the industry in 2017. Air operated diaphragm pumps use compressed air as a power source, which enables them to transfer a wide variety of fluids including slurries, sludge, abrasive, and high viscous fluids.

The segment is growth of air operated segment is likely to gain momentum in recent future, as it offer wide variety of applications in chemical, pharmaceutical and oil and gas industries. In terms of revenue this segment is estimated to expand .at the fastest CAGR of 5.7% from 2018 to 2025.

Electrically operated segment is ideal for applications which require smooth flow and low pulsation. Instead of compressed air it uses electrical means such as electric motor as a power source. This electric diaphragm pumps are best suitable for food & beverage, pharmaceutical, personal care industries.

On the basis of end use, the market has been categorized into water & wastewater, oil & gas, chemical & petrochemical, pharmaceutical, food & beverages, and others. Among these, oil & gas and water & wastewater are the major application areas. In terms of revenue, oil & gas segment held the highest market share and is likely to reach at USD 1.44 billion by 2025. 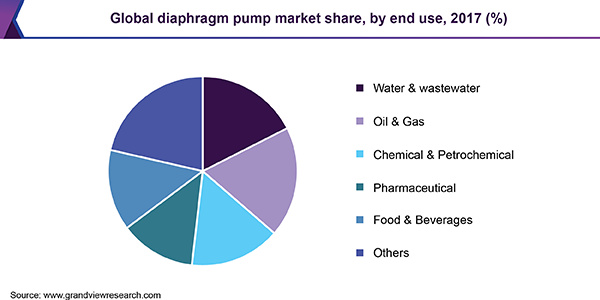 The water & wastewater segment also accounted for a significant share of the global market in the past and is predicted to expand further over the forecast period. The chemical & petrochemical segment is projected to witness a CAGR of 6.2 % during the forecast period.

Asia Pacific is estimated to be the dominant regional market over the forecast period. China, India, and Japan are some of the prominent countries that are anticipated to influence the global, as well as regional, market during the forecast period. High demand in energy fuel due to growing population and foreign direct investments along with rapid urbanization is the key factor propelling the market growth in APAC region.

The Europe regional market consists of major countries including Germany, France, Italy, and U.K. among other Eastern and Central European countries. It was the second-largest regional market, in terms of revenue, in 2017 owing to high product demand from several end use sectors, such as include food & beverage and chemicals & petrochemicals.

MEA is expected to be the fastest-growing region during the estimated period. The region has a large number of water and wastewater treatment plants due to the lack of freshwater sources. Growing freshwater demand due to rising population is expected to drive the market further.

This report forecasts revenue and volume growth at global, regional, and country levels and provides an analysis of the latest industry trends in each of the sub-segments from 2014 to 2025. For the purpose of this study, Grand View Research has segmented the global diaphragm pump market report on the basis of operation, mechanism, end use, and region: