The global disposable surgical devices market size was valued at USD 5.2 billion in 2020 and is expected to expand at a compound annual growth rate (CAGR) of 7.8% from 2021 to 2028. The increasing prevalence of chronic diseases, such as neurological, cardiovascular, infectious, and urological disorders, is expected to fuel the growth of the market. The high incidence of diseases, such as diabetes and cancer, and other autoimmune disorders across the globe is also a major factor responsible for the rising number of surgical procedures. Estimates from the International Diabetes Federation (IDF) indicate that globally, over 425 million people were suffering from diabetes in 2017. Out of these, 327 million individuals were in the age group of 20 to 64 years and 98 million were over 65 years. Type II diabetes is the most common type and 90% of the diabetic population is suffering from this form of the disease. 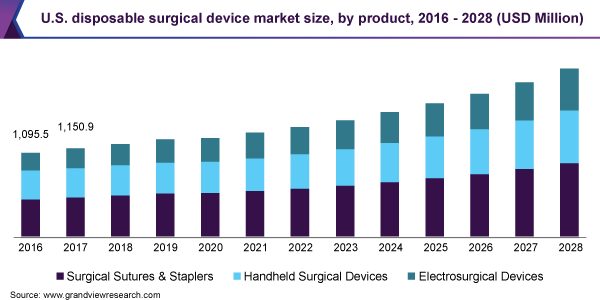 The increasing number of surgical procedures is also one of the key factors expected to drive the overall market. According to OMICS International Conference, 2015, approximately 234 million surgical procedures are performed annually. Furthermore, the 2017 Plastic Surgery Report released by the American Society of Plastic Surgeons stated that 17.5 million minimally invasive surgical procedures were performed in 2017, indicating a 2% rise from the previous year. These facts highlight that there will be a steady demand for plastic surgeries in the coming years. As a result, the usage of disposable surgical devices is anticipated to grow over the forecast period.

Sterilization plays an important role in the healthcare industry. The probability of getting affected by an infection or a virus is high in medical settings, like clinics, hospitals, and laboratories. The usage of disposable medical devices helps in overcoming the challenges faced for sterilization of a device used for a procedure. Patients must visit medical settings such as hospitals for surgical procedures. COVID-19 has negatively impacted the visit of patients to these medical settings, which may hinder the adoption of surgical procedures. However, the number of surgical procedures is expected to increase gradually over the forecast period. During this pandemic, a large population is preferring disposable devices for usage as well as for treatment to avoid the transmission of the virus. Therefore, the growing health consciousness among people, increasing number of hospital visits, and longer hospital stays are expected to boost the growth of the market during the forecast period.

Despite various advantages associated with disposable devices and the growing demand for these devices, there are certain factors that may limit the market growth. Surgical sutures and staplers are mainly used for wound closure surgeries. However, these devices cause pain and require frequent visits to the hospitals or clinics for removal. Additionally, the usage of these devices sometimes leads to infections and tissue inflammation, thereby negatively impacting its adoption. People seeking wound closure surgeries mostly prefer less or non-invasive options, such as glues and sealants, to avoid infection and pain. The availability of less or non-invasive alternates for disposable surgical devices is expected to hinder the market growth during the forecast period.

Surgical sutures and staplers held the largest share of 45.3% in 2020. Surgical sutures are threads used after surgery or in treating an injury to close incisions or repair cuts. Surgical staplers are also used for wound closure and are more precise than sutures. The process of surgical stapling is quicker. Moreover, staples lead to a lower risk of infection as compared to sutures. Sutures are the conventional way of closing a wound; however, the risk of wound reopening with sutures is comparatively lower than staples. The growing development of disposable sutures and staplers by various market players is also expected to contribute to the segment growth.

The plastic and reconstructive surgery segment is expected to grow at the fastest rate of 9.0% over the forecast period. According to the American Society of Plastic Surgeons (2017), over 17.5 million cosmetic surgeries were performed in the U.S. Furthermore, there was a rise of 200% in minimally invasive cosmetic procedures in the U.S. since the year 2000. Most minimally-invasive surgeries involve the use of disposable surgical instruments, thereby expected to propel the market growth. 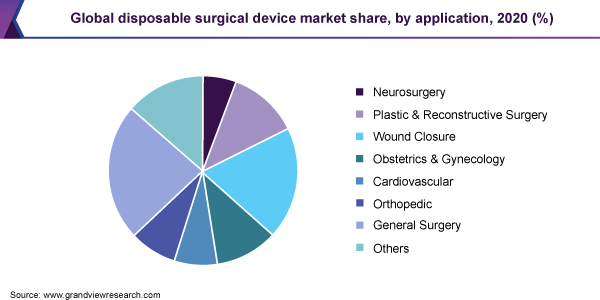 The obstetrics and gynecology segment is expected to witness significant growth during the forecast period. Obstetrics specifically includes pregnancy and childbirth, whereas gynecology is a broader aspect including all the female reproductive organ disorders. Some of the common surgical procedures involving female reproductive organs include episiotomy and cervical cerclage. In addition, minimally invasive gynecologic surgeries lead to less postoperative pain, resulting in shorter hospital stays. These surgeries involve the use of surgical tools, such as laparoscopes and hysteroscopy. The growing development of disposable surgical devices for obstetrics and gynecology to avoid infection transmission is expected to contribute to the segment growth.

North America held the largest share of 29.8% in 2020. This can be attributed to the increasing incidence of chronic diseases, such as cardiovascular and neurological diseases, cancer, diabetes, and autoimmune diseases. In addition, an increase in the number of surgical procedures due to accidents, burns, and trauma cases is one of the major factors driving the surgical instruments market in the region.

According to the WHO, the burden of noncommunicable diseases (NCDs) is the highest in the European region and is expected to grow at a high rate in the near future. As per the WHO, chronic diseases such as diabetes, cardiovascular disorders, chronic respiratory diseases, mental disorders, and cancer contributed to an estimated 86% of deaths in the region, thereby contributing to 77% of the disease burden in the European region. Unhealthy dietary habits, sedentary lifestyle, smoking, and alcohol consumption are primary reasons responsible for the increase in disease burden in Europe. Surgical interventions help treat and manage these diseases, facilitating the use of disposable surgical tools. With a substantial increase in the number of surgeries being performed due to a rise in the incidence of chronic diseases, the demand for these instruments is increasing.

Asia Pacific is expected to grow at the fastest rate of 8.0% during the forecast period. The presence of a large patient pool in the region is expected to contribute to the regional market growth. Japan has a large geriatric population, which requires increased care and attention in terms of health. According to the National Census 2015 report, nearly 26.7% of the total Japanese population is aged 65 years and above, leading to the high prevalence of chronic diseases in the country. According to the Japan Cancer Society (JCS), one in three deaths in Japan occurred due to cancer, with lung and stomach cancers being the most frequent types. With an increase in the prevalence of such cancers, preventive surgeries are often performed to limit the growth of malignant tumors in the body. As per the International Society of Aesthetic Plastic Surgery, over 1,678,610 cosmetic and non-surgical procedures were performed in Japan in 2017. Therefore, the growing number of surgeries is expected to increase the need for disposable surgical devices.

This report forecasts revenue growth at the global, regional, and country levels and provides an analysis of the latest industry trends and opportunities in each of the sub-segments from 2016 to 2028. For the purpose of this study, Grand View Research has segmented the global disposable surgical devices market report on the basis of product, application, and region:

How big is the disposable surgical devices market?

b. The global surgical disposable devices market size was estimated at USD 5.2 billion in 2020 and is expected to reach USD 5.5 billion in 2021.

What is the disposable surgical devices market growth?

b. North America dominated the disposable surgical devices market with a share of 29.8% in 2020. This is attributable to an increase in the number of surgical procedures due to accidents, burns, and trauma cases in the region.

Who are the key players in the disposable surgical devices market?

What are the factors driving the disposable surgical devices market?

b. Key factors that are driving the disposable surgical devices market growth include the increasing prevalence of chronic diseases, rising number of road accidents, and rise in the number of surgical procedures.