The global DDI market size was estimated at USD 574.9 million in 2015. Increasing subscribers base and mobile devices have led to the data traffic growth. This has contributed to the exhaustion of the IPv4 address space. In regions with the rapid adoption of mobile technology and high population densities, such as Asia Pacific, the IPv4 addresses have completely depleted. Recently, in 2015, the American Registry for Internet Numbers (ARIN) declared that the IPv4 addresses in the U.S. were completely depleted and will prepare to migrate to IPv6 protocol. Such issues are leading to the rapid adoption of IPv6 driving the demand for DDI over the forecast period. 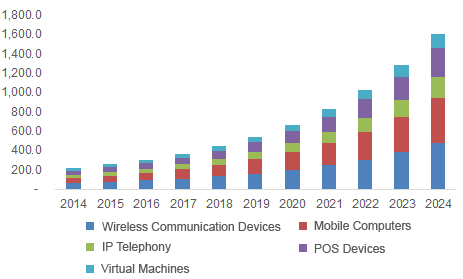 Furthermore, Domain Name System Security Extensions (DNSSEC) is another major trend in the industry, which makes the internet more secure by protecting the DNS. The DNS is vulnerable to several threats, including cache poisoning and man-in-the-middle attacks. These threats use forged data to transmit the Internet traffic to unintended addresses and fraudulent sites. Due to the recent prominent attacks, government organizations and the commercial industry are usually more willing to invest in security solutions.

The hardware segment dominated the market in 2015, which is expected to continue over the forecast period with a CAGR of 22.7% from 2016 to 2024. Hardware appliances are preferred in large enterprises owing to the rising security concerns regarding the DNS solutions. Hardware components are more secure than software solutions, thereby leading to high demand across the end-use segment. However, SMBs often prefer software solutions owing to the rising deployment of cloud infrastructure.

IPv6 Internet Protocol to capture considerable share in the industry

IPv4 is estimated to witness a major share of over 84% in 2015, however, the segment is estimated to decline significantly over the future, owing to the depletion of IPv4 and transition to the IPv6 Internet protocol. Furthermore, the increasing demand for IoT necessitates that players in the industry to supply efficient IPv6 functionalities and services to simplify the transition. The surge in the IP-enabled tools in the organizations has led to the rapid transition to IPv6, thus requiring more advanced IPAM solutions to manage the increasing numbers of IP addresses.

Integrated services segment to grow significantly in the industry

On-premise deployments to dominate the industry

On-premise solutions are expected to witness significant growth in the industry at a significant CAGR of over 22% from 2016-2024, owing to the increasing adoption of physical DDI appliances by large enterprises. However, cloud solutions will experience consistent growth as the organizations across several industries are transitioning their business-critical operations and workloads to cloud computing to decrease the burden on their IT support staff and reduce costs. Moreover, security risks related to DNS servers have led vendors to invest in the security software solutions for the DNS servers.

Large enterprises to capture major share in the industry

Large enterprises dominated the industry with the revenue share of nearly 82% in 2015 and the trend is expected to continue over the forecast period. Large enterprises including the government and commercial sector, are deploying DDI solutions on a large scale owing to the rising number of IP addresses and security risks pertaining to the DNS solutions integrated into the organizations.

Mobile computers are expected to grow at significant CAGR of over 23% from 2016 to 2024, owing to the increasing adoption of mobile devices across the globe. The growing acceptance of the BYOD trend is anticipated to drive the demand for DDI solutions. BYOD significantly impacts the demand for mobile devices, leading to an increasing number of IP addresses. Moreover, it has led the mobile devices to access corporate email, calendars, applications, and data resulting in security risks and breach of crucial information. These factors draw substantial demand for the efficient and robust DDI solutions.

North America dominated the industry with a significant revenue share of over 54% in 2015 and the trend is expected to continue over the forecast period. However, the Asia Pacific region is anticipated to grow considerably with a CAGR of over 25% from 2016 to 2024. The primary factors expected to spur the regional demand are the increasing penetration of mobile devices and Internet usage. With the rapid growth in the IP usage, countries such as China and India are increasing their focus on managing the growth, leading to the high demand for DDI solutions and services.

Infoblox, BT Diamond IP and BlueCat Networks are amongst the key share holders

The key industry players in the DDI industry include Infoblox, BT Diamond, BlueCat, Alcatel-Lucent, EfficientIP, FusionLayer, ApplianSys Limited, Incognito Software Systems, Inc., INVETICO, Microsoft Corporation, SolarWinds, Inc. and Men & Mice. Mergers and acquisitions are the key growth strategies in the industry to sustain in a highly competitive environment. Manufacturers, suppliers, and distributors are collaborating to expand and enhance their distribution channel and product offerings as well as gain market share. For example, in 2016, Nokia acquired Alcatel-Lucent, which was intended to create the next-generation technology and services for an IP connected world.

How big is the dns, dhcp, and ipam market?

What is the dns, dhcp, and ipam market growth?

Which segment accounted for the largest dns, dhcp, and ipam market share?

b. The integrated service dominated the dns, dhcp, and ipam market with a share of 61.1% in 2019. This is attributable to the ability to improve the reliability of networks and advances in the workflow tasks.

Who are the key players in dns, dhcp, and ipam market?

What are the factors driving the dns, dhcp, and ipam market?

b. Key factors that are driving the market growth include increasing subscribers base & mobile devices leading to data traffic growth and depletion in the usage of IPv4 addresses.