The global door phone market size was valued at USD 3.4 billion in the year 2018 and the market is estimated to expand at a CAGR of 5.7% for the forecast period. Growing safety concerns in the residential and commercial spaces due to the access of unauthorized persons is raising the demand for safety devices such as door phone. It not only increases home security but also offers great convenience when integrated with the access control system. Many apartments can be connected through this device to serve the purpose of both intercom and safety devices, thereby eliminating the additional cost of installing and maintaining multiple devices.

Demand for such systems can be seen in apartments, villas, bungalows, stores, offices, hotels, banks, and other places. The need for such a system can be seen when a person has to regulate the entry of a person on their premises. Growing demand for home automation and smart appliances is driving the need for safety appliances in the market. The adoption of smart technologies has provided enough space in controlling of devices through their smartphones and tablets. One can easily connect their door phone with their smartphone and control the opening and closing of their door even from the far places. This makes life easier for people who are dependent on the maid for their child's upbringing at home or whose relatives and friends want to enter in their absence. This kind of advanced level video phone is certainly in more demand among major western countries. 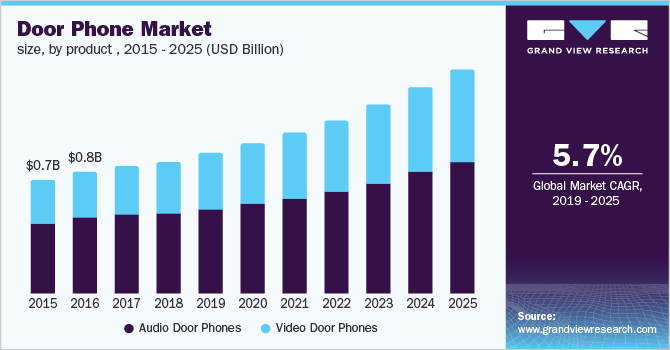 The increasing number of smart cities in various countries is driving the demand for safety and surveillance products in the market. Moreover, rapid urbanization is shifting many people to live in a multistoried apartment due to space constraints. This, in turn, drives the need for a robust security system. The wireless feature of door phones can give multilevel security from society entrance to lobby and main door entrance. The user can easily connect with the central security system in case of any incident, thereby driving the global market. In addition, a rise in the number of construction activities in the residential and commercial sectors increases the demand for such products in the market.

As per the report published by the University of North Carolina, about half of the burglars reported engaging in at least one residential burglary and about a third reported engaging in at least one commercial burglary in U.S. Moreover, about 60% of the burglars indicated that presence of alarm sometimes stops them for unauthorized entry. The above-mentioned factors are driving the need for video door phones, which are directly connected with the security alarm system. Sometimes, the false ringing of the alarm due to some technical issues may create trouble for the users, thereby restricting the growth of network video phones in the market.

Audio door phones accounted for the largest share of 54.9% in the year 2018. These kinds of phones are mostly preferred in commercial space such as offices, ticket counter, and banks. At such places, normally glass doors and windows are there, which allow the user to physically see the person and hence normal audio instruments suffice the need.

Video door phone is the fastest-growing segment, expanding at the fastest CAGR of 6.5% from the year 2019 to 2025. Demand for such products can be mostly seen in new large multi-occupancy buildings. These buildings require some safety measures of entry for visitors and hence video door phones are mostly in use. Apart from that, network video phones are trending faster owing to their feature of getting connected to the central security room providing high-level safety to the resident. Moreover, local government policies, development of infrastructure, and technological advancements in many countries are equally important in influencing the door phone market growth.

The residential sector was the largest application segment with a revenue of USD 2.5 billion in the year 2018. Door phones for homes are high in demand as the personal and family safety is a prime concern for a customer. Moreover, a rising number of residential constructions is anticipated to boost the sales of the product over the forecast period. The product is very helpful in providing security if there are senior citizens and children at home. Moreover, easy installation techniques and recording features of the product in case of theft at home are boosting sales in the industry. 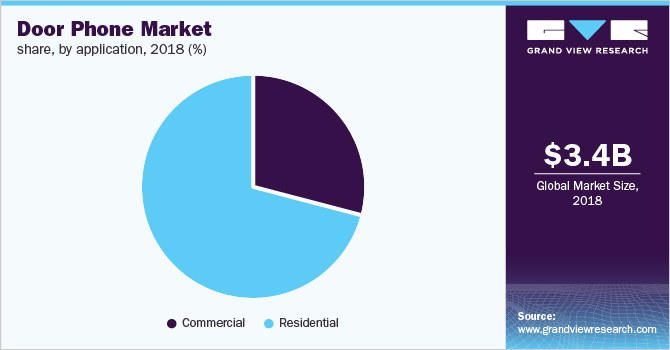 The commercial sector is expected to be the fastest-growing segment, expanding at a CAGR of 7.2% from 2019 to 2025. The segment is driven by a rise in demand for a high level of security needed at many industries and private offices. An increasing number of terrorist attacks in various hotels and commercial places is driving the need for safety instruments.  In addition, door phones with biometric access features allow the entry of only authorized personnel on the premises. Some other added features such as face recognition, video recording, and artificial intelligence are driving the demand for advanced level phones in the market.

North America held the largest share of 35.4% in the year 2018 on account of the rising adoption of the security devices by the commercial sector in countries such as the U.S. and Canada. The rise in demand for convenient products for door opening is also a key factor driving the market in this region. Moreover, door phones provided with smart technology has been gaining traction among the consumers in North America. Advancements in door phones such as a smart locking system and Wi-Fi enabled system is adopted by the high-security personnel and large industrial areas in the market.

Asia Pacific is expected to expand at the highest CAGR of 7.6% over the forecast period. The market is driven by an increasing number of construction activities in the residential sector. The real state sector in India is rapidly growing and about 90% of the newly constructed buildings have some type of door phones. Hence, it has a large demand in such countries. Moreover, the replacement of manual security services with such high-tech products is reducing the spending on security services for many societies and commercial spaces, thereby driving the demand for door phones.

Rising demand for door phones in countries such as China, India, and Brazil leads to an increase in product innovations and market developments. The market is identified by several strategic initiatives such as research and development, marketing campaigns, and new product launches. Key manufacturers in the industry include Aiphone Corporation; Panasonic Corporation; Fermax Holding Investment SL; 1byone, Inc.; Honeywell International Inc.; ABB Genway; and Legrand. For instance, in August 2018, Panasonic launched a new video door phone in the market, which had a voice change function, along with a picture recording feature. More than 300 to 400 leading and regional level players are present in the market, thereby giving a tough competition to the new entrants in the market.

This report forecasts revenue growth at the global, regional, and country levels and provides an analysis of the latest industry trends in each of the sub-segments from 2015 to 2025. For the purpose of this study, Grand View Research has segmented the global door phone market report on the basis of product, application, and region:

How big is the door phone market?

What is the door phone market growth?

Which segment accounted for the largest door phone market share?

b. Audio phone dominated the global door phone market with a share of 54.5% in 2019. This is attributable to the high preference among commercial spaces such as offices, ticket counter, and which allow the user to physically see the person and hence normal audio instruments suffice the need.

Who are the key players in door phone market?

What are the factors driving the door phone market?

b. Key factors that are driving the door phone market growth include growing safety concerns in the residential and commercial spaces due to the access of unauthorized people.