The global drinking water adsorbents market size was estimated at USD 459.0 million in 2018 and is expected to expand at a CAGR of 4.0% from 2019 to 2025. The market is anticipated to be driven by rising concerns regarding pollution, resulting in the formulation of strict regulations. Growing concerns related to health hazards, including cancer, brain damage, and organ failure caused by the consumption of contaminated water that can be treated using adsorbents is expected to further fuel the growth. Furthermore, a rise in demand for activated carbon for the elimination of turbidity and naturally occurring organic matter is projected to positively impact the market.

The U.S. is one of the leading markets for water treatment on account of its highly developed industrial and advanced processing capabilities. Favorable government initiatives to promote investments in the water treatment industry at the domestic level are expected to have a positive impact on the market for drinking water adsorbents over the forecast period. 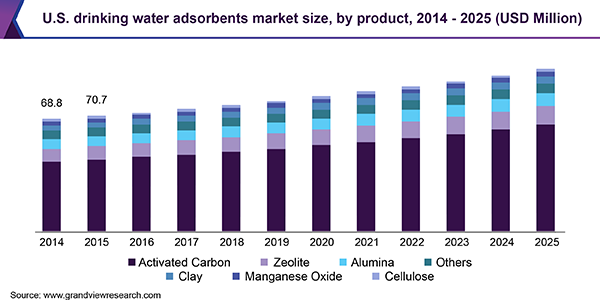 The market is expected to witness a high threat of substitution over the forecast period from alternative water purification techniques, such as reverse osmosis. This can be attributed to the advantages of the alternative techniques over adsorption including the ability to eliminate dissolved impurities from water.

The drinking water adsorbents market is witnessing an increasing demand for organic adsorbents, such as coconut shells, coal, and wood among more. The superior efficiency of these products as an adsorbent makes them extremely valuable in water quality control and purification. Also, they can be used in a wide range of applications for environmental sustainability and recovery settings.

Rising demand for adsorbents for the filtration of drinking water offers huge opportunities for new manufacturers to enter the market. Furthermore, this surging demand coupled with growth opportunities in developing countries is expected to play a significant role in paving the way for local players to expand their business portfolio.

The market players focusing on the development of technologies for recycling of spend adsorbents. Also, they try to increase the lifecycle of these adsorbents through regeneration. Growing investments in the development of bio-char as bio-adsorbent and as a low-cost alternative to activated is predicted to benefit the market growth over the forecast period.

Zeolite is expected to expand at a CAGR 4.1% over the forecast period, attributed to the rising preference for the product as a low-cost resource for separation and purification processes, particularly the removal of ammonia and heavy metals from drinking water, owing to high ion exchange capacity and molecular sieve properties.

Clay is considered as a natural adsorbent for the removal of pollutants owing to its ability to hold exchangeable cations and anions. The product is widely utilized for the adsorption owing to its large surface area, high cation exchange capacity, mechanical and chemical stability, and layered structure. 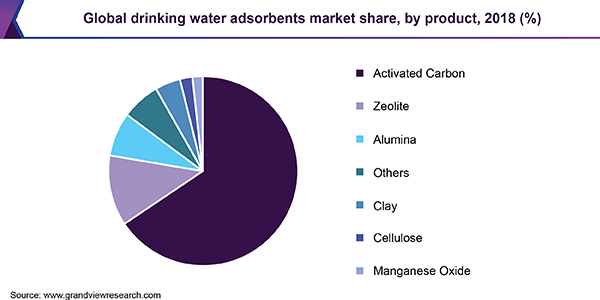 Activated carbon is estimated to reach USD 409.1 million by 2025, on account of its exceptionally rare physical characteristics, which enable it to remove dissolved contaminants including taste, odor, color, and toxic species. Activated carbon is the most efficient product, used for the removal of organic contaminants due to the presence of carbon and hydrogen in their structure.

Polymeric adsorbents have emerged as a highly effective alternative for activated carbon for the removal of pollutants from water bodies and are expected to offer new opportunities for the removal of heavy metals and other inorganic pollutants. Chitosan-based granular adsorbents are also preferred for selective and enhanced adsorption performance.

The demand for adsorbents in North America is projected to be driven by stringent environmental protection regulatory standards and is expected to expand at a 3.8% CAGR during the forecast period. Besides, implementation of the Safe Drinking Water Act (SDWA) by the United States Environmental Protection Agency (U.S. EPA) is projected to benefit the regional market growth.

Europe is expected to remain the second-largest market for drinking water adsorbents in the forthcoming years. The region has stringent laws regarding water treatment. High awareness regarding pollution hazards, the presence of strict norms and regulations to promote sustainable growth, and high demand from manufacturing sectors for water filtration processes are the primary factors contributing to the demand for adsorbents in Europe.

Asia Pacific is expected to witness the fastest CAGR of 4.4% during the forecast period, on account of rising concerns regarding water pollution, resulting in the formulation of strict regulations. The governmental bodies, such as municipal corporations are encouraging the use of adsorbents for water treatment owing to their superior characteristics in terms of the removal of heavy metal ions.

Rising groundwater contamination, owing to harmful pollutants including arsenic, fluoride, sewage, and industrial effluents, is leading to a significant adverse health impact among the population in South Asia. This is expected to boost the prominence of water treatment processes for the removal of pollutants from the groundwater resources, thereby driving the regional market.

The market is fragmented in nature due to the presence of a large number of small and medium-scale manufacturers. The regional players position themselves as regional experts and specialize in the know-how of state and national level legislations. Also, these players know the regional environment and product demand, giving them a competitive edge over other players.

The market participants focus on maintaining strategic relationships with suppliers and distributors to maintain a steady product supply. They generally source the raw materials from multiple sources to avoid the disruption in material supply.

This report forecasts revenue growth at global, regional, and country levels and provides an analysis of the latest industry trends in each of the sub-segments from 2014 to 2025. For this study, Grand View Research has segmented the global drinking water adsorbents market report based on product and region: