The global self-driving cars and trucks market demand is expected to be approximately 51.60 thousand units in 2021 and is anticipated to witness a CAGR of 53.6% from 2022 to 2030. Self-drive cars, also known as autonomous vehicles, are a key innovation in the automotive industry, with high growth potential, and act as a catalyst in the technological development of automobiles. The development of a supportive regulatory framework, government funding, and investment in digital infrastructure is expected to play a key role in positively affecting market growth over the forecast period. The market for self-driving cars and trucks has a wide range of products and systems that make up the autonomous vehicle infrastructure. 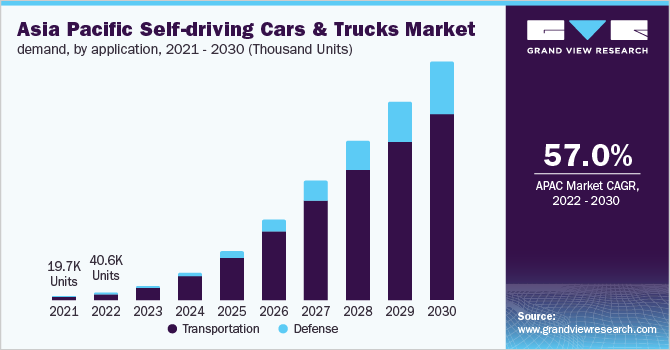 These cars are expected to be sold at the company showrooms. With the rise in technologies and increased connectedness of the vehicles, the threat of car systems getting hacked is increasing. Thus, cyber security and safety solution providers such as Argus Cybersecurity Ltd. and Green Hill Software, among others, are developing anti-hacking algorithms for self-driving cars. Several technology providers and car manufacturers are investing in the Asia Pacific countries due to the increasing disposable income of consumers in these countries displaying high revenue potential over the forecast period. For Instance, Apple Inc. and BMW are a few key players investing heavily in China.

The rising safety concerns and advancements in automotive technologies have led to the penetration and acceptance of self-driving cars and trucks by governments of various countries, such as the U.S., Germany, China, and Japan. Furthermore, several densely populated countries, including Sweden and the Netherlands, along with government support, may encourage the testing of driverless cars and, in turn, catalyze market growth in the years to come. The development of electrical vehicles and autonomous vehicles is increasing simultaneously. Many autonomous vehicles that are in the Beta phase of their testing are driven using electrical power. The development of electric vehicle charging stations would also affect the growth of autonomous vehicles.

This, in turn, would indirectly assist in decreasing the pollution caused by cars, thus reducing the environmental impact. For instance, Tesla Motors have initiated a project known as ‘Autopilot’ that would autonomously drive the electric cars developed by the company. The project is in the testing phase and is expected to be launched soon. The surging technological advancements aiming at offering enhanced features while reducing the cost are a major factor expected to drive the demand for self-driving cars over the forecast period. Advancements about security, driver assistance, convenience and comfort, electrical suspension, power train, instrumentation, braking, and safety are projected to fuel the adoption of self-driving cars. 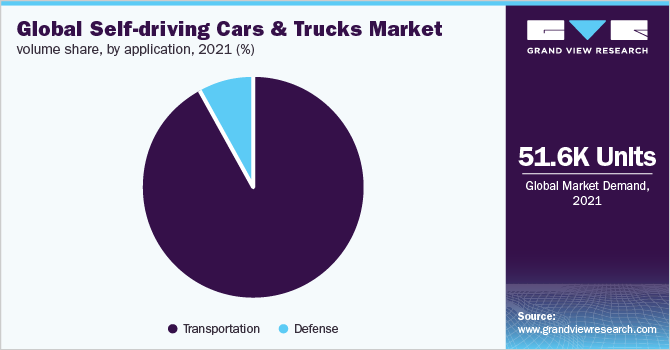 The U.S. is anticipated to witness high adoption of driverless technology in transportation due to increased government support in amending transport regulations to create a gateway for driverless cars. Furthermore, Europe is also expected to emerge as a potentially lucrative market for self-driving cars and trucks, for the adoption of self-driving cars with the growing consumer preference for using techno-advanced products.

In addition to this, the Department of Transport of the U.K. 2018 initiated a jurisdiction to operate autonomous vehicles on any public roads without any extra insurance or permits. The Department also established the Centre for Connected and Autonomous Vehicles in 2018. The U.K. government plans for self-driving vehicles to be in use by 2021, and it also has further plans to make the required changes to the regulations that can support the development of self-driving cars in the U.K.

Leading players in the market for self-driving cars and trucks stay ahead of the competition through collaborations and the development of innovative solutions. For instance, in August 2017, BMW AG, Intel Corporation, Mobileye, a subsidiary company of Intel Corporation, and Fiat Chrysler Automobiles (FCA) signed a memorandum of understanding for FCA to join the companies in developing a self-driving vehicle driving platform. The memorandum aims to combine the resources, capabilities, and strengths of all companies to reduce time to market, increase development efficiency, and enhance the application’s technology.

The automobile industry is dynamic and changes with advancements in technologies. Several major players in the industry, such as General Motors, Volkswagen, Mercedes, BMW, and others, invest a significant part of their revenue toward researching and developing technologies. Currently, there is a growing trend of self-driving cars in the automotive industry, thus attracting larger investments in developing these vehicles. The U.K. government granted permission to test self-driving cars on public roads. Furthermore, the Federal Department of Environment, Transport, Energy, and Communications in Switzerland permitted driverless testing on Zurich streets. Some of the key players operating in the global self-driving cars and trucks market include:

This report forecasts volume growth at the global, regional, and country levels and provides an analysis of the latest industry trends in each of the sub-segments from 2022 to 2030. For the purpose of this study, Grand View Research has segmented the global self-driving cars and trucks market report on the basis of application and region:

How big is the self driving cars and trucks market?

What is the self-driving cars and trucks market growth?

Which segment accounted for the largest self-driving cars and trucks market share?

b. North America dominated the self-driving cars and trucks market with a share of 45.5% in 2021. This is attributable to amendments in traffic regulations to incorporate autonomous cars on public roads.

Who are the key players in the self-driving cars and trucks market?

What are the factors driving the self-driving cars and trucks market?

b. Key factors that are driving the market growth include the rising need for road safety, environmental impact due to traditional vehicles and increased energy savings by autonomous vehicles.