The global driving simulator market size was valued at USD 4.6 billion in 2019 and is expected to expand at a CAGR of 3.4% over the forecast period. Evolution of autonomous vehicles across the globe is considered to be a predominant factor responsible for the growth of the market during the forecast period. Automotive manufacturers are investing significantly in the development of components that are used in autonomous vehicles, which include sensors and processors. Therefore, automotive OEMs have been using driving simulators to test the capabilities and performance of these components in the vehicle. 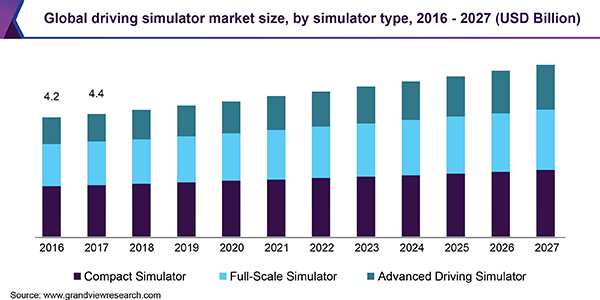 Demand for various features such as adaptive cruise control, automatic parking, collision avoidance system, blind-spot monitor, and lane departure warning system has increased with the advent of Advanced Driving Assistance Systems (ADAS). Automotive companies all over the globe are making developments in the aforementioned technologies to remove the possible glitches, which may perhaps cause injury to the driver. Therefore, manufacturers put ADAS systems to test on simulators, which, in turn, provides them with a realistic view of the entire vehicle performance. Therefore, driving simulators are aiding automobile manufactures with pre-testing capabilities for system improvements.

Automotive manufacturers mainly use advanced driving simulators for the purpose of research and testing as they provide exceptional testing capabilities in realistic surroundings. The technologies used in these testing machines are undergoing several advancements, including clear image formation, better quality control loaders, and extensive motion capabilities. Factors such as high initial cost of machines and lack of infrastructure in developing countries are expected to impede the growth of the market. However, increasing efforts by the governments of developing countries to attract automotive companies for building R&D centers in these nations will gradually reduce the impact of such hindrances on market growth.

Simulators are increasingly used in the marine and aviation industries. In the aviation industry, flight simulators are used for training pilots as well as the crew members by delivering a real-time experience of a flight. Flight simulators have been gaining importance, especially for military and commercial aircraft training purposes. These testing machines aid in developing new and improvised skills in pilots for operating and handling flights in critical situations, which, in turn, helps in reducing the risk associated with the passengers. Reduced risk, coupled with reduction in the training cost, is expected to bolster the market growth over the forecast period.

Based on simulator type, the market has been segmented into compact, full-scale, and advanced driving simulators. The compact simulator segment dominated the market in terms of revenue in 2019 and is expected to maintain its lead over the forecast period. Compact driving simulators are used for several applications, including cars, bikes, trucks, and buses, due to their small size. Moreover, compact simulators are more pocket friendly as compared to other machine types, such as full-scale and advanced simulators. Therefore, they are widely used by driving institutions as well as local driving trainers for training purposes.

The advanced driving simulator segment is anticipated to witness the highest growth over the forecast period owing to its technologically advanced features, such as 360º viewing angle and a motion platform, thereby providing a realistic experience to the trainees. Moreover, automotive companies have been using such driving simulators for testing advanced vehicles dynamics, such as acceleration, braking, steering, and aerodynamics, in the augmented environment. Furthermore, use of these testing machines aids researchers and engineers in developing intelligent highway designs and conducting human behavior studies that include the behavior of drivers under the influence of alcohol and drugs and adverse weather conditions.

Based on application, the global driving simulator market has been classified into research & testing, training, and motorsports & gaming. The research & testing segment dominated the market in 2019 and is expected to witness the highest growth over the forecast period. This can be attributed to the advent of autonomous vehicles. Automotive manufacturers all over the globe are investing significantly in the research & development activities in order to bring fully autonomous cars in the market. Driving simulator is used by these manufacturers for testing the performance of the autonomous vehicles in real-time, thereby boosting the demand for driving simulators.

Based on end use, the market has been segmented into automotive, marine, and aerospace. The automotive segment held a considerable share in 2019 owing to high penetration of passenger as well as commercial vehicles across the globe. As per the International Organization of Motor Vehicle Manufacturers (OICA), the annual production of passenger vehicles in 2018 stood at around 70 million across the globe.

Moreover, automotive manufacturers such as BMW, Tesla, Honda, and Toyota are making significant investments in research & development to bring autonomous cars to the market and improvise the designs or models of the existing cars. These manufacturers use driving simulators to test the real-time performance and capabilities of the vehicle as these driving simulators are equipped to mimic various operating conditions, such as driving in adverse weather conditions, busy roads, and bumpy roads. 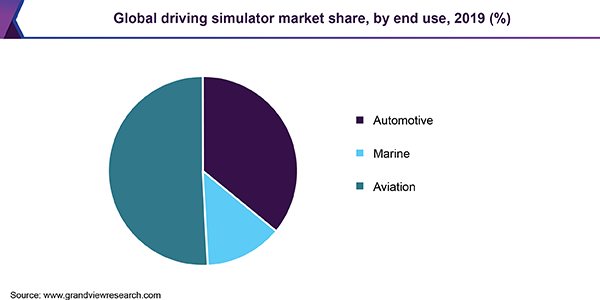 Driving simulators are increasingly used across the globe by airlines, aviation schools, and training centers. Flight simulators are used for various platforms, including commercial helicopters and aircraft, military aircraft, as well as unmanned aerial vehicles (AEV). Demand for trained pilots or personnel has increased considerably on account of increasing commercial air traffic across the globe. This has contributed to the increased use of these machines for training purposes.

Most of the prominent players in the aviation industry, such as Boeing and Airbus, have been increasingly investing in the development of technologically advanced training centers. Moreover, these players are engaged in providing simulation training services to their commercial as well as non-commercial customers. This has resulted in the increased use of driving simulators in the aviation industry.

In terms of revenue, Europe dominated the market in 2019 and is expected to maintain its lead over the forecast period. The growth of this region is majorly attributed to countries, like Germany and the U.K. Germany is the hub of various big automotive manufacturers, such as BMW, Audi, Porsche, and Mercedes. These companies are well known for introducing new automobile technologies, such as connected car platform, automated parking system, and adaptive cruise control systems. Therefore, these companies are using driving simulators as a tool to assess vehicle performance, thus developing the best in class vehicle technologies.

Asia Pacific is anticipated to witness the highest growth over the forecast period owing to increasing research & development activities in the automotive sector. Asia Pacific is considered to be a developing region and countries such as India, Japan, and China are taking initiatives to attract automotive OEMs to start or increase manufacturing facilities in the region. For instance, in January 2019, German automotive manufacturer, Volkswagen opened a new R&D facility in Pune, India. Furthermore, several Asian car manufacturers, such as Honda Motor Company Ltd., are increasing their production capabilities in the region. Therefore, growing R&D activities are expected to bolster regional market growth.

Prominent players in the market include Thales Group; L3 Technologies Inc.; CAE, Inc.; Bosch Rexroth AG; and Anthony Best Dynamics Limited. These players are striving to expand their share in the market. Moreover, driving simulator providers are involved in strategies, such as partnerships, investments, and acquisitions and mergers. Market players are also launching new products and services as well as maintaining competitive prices. For instance, in February 2018, Bosch Rexroth announced that it is supplying an advanced motion platform for Renault Dynamic Driving Simulator. This motion platform consists of a rotating yaw table and a high-performance hexapod, along with linear motors.

This report forecasts revenue growth at the global, regional, and country levels and provides an analysis of the latest industry trends and opportunities in each of the sub-segments from 2016 to 2027. For the purpose of this study, Grand View Research has segmented the global driving simulator market report based on simulator type, application, end use, and region: