The global elastography imaging market size was estimated at USD 1.9 billion in 2018 and is anticipated to expand at a CAGR of 7.8% by 2026. Rising incidence of chronic liver and breast cancer and increasing demand for advanced diagnostic techniques are some of the major market drivers. High preference for minimally or non-invasive surgical procedures is also expected to fuel the market during the forecast period.

Elastography technique is gaining popularity and acceptance by patients as well as doctors, largely due to its non-invasive nature and accurate assessment of tissue mechanical properties. Advanced elastography systems provide detailed quantitative as well as qualitative diagnosis. Increasing demand for advanced diagnostic techniques in developing countries is expected to replace traditional ultrasound technique with elastography, giving the market a major boost. 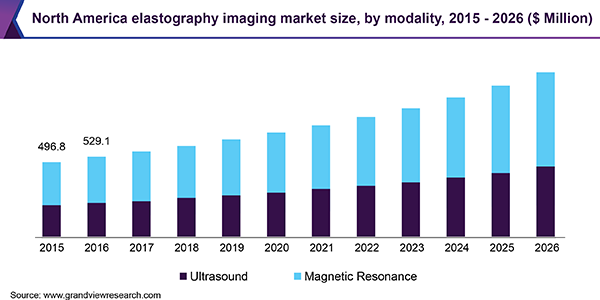 Shear wave elastography provides a large number of advantages over other diagnostic techniques. The technique helps reduce the need for biopsy in various breast conditions. It is widely used to assess liver conditions before and after transplantation and monitor the degree of liver cirrhosis. Increasing incidence of breast and liver conditions is expected to boost demand for elastography systems.

Elastography has potential applications in early detection of tumors. It can be used effectively to accurately detect tiny nodules in glands. This is expected to increase the adoption of elastography in preventive healthcare.

Increasing number of ongoing studies to assess potential applications of elastography is expected to fuel the market during the forecast period. A large number of these studies include ophthalmic applications such as analysis of oculomotor muscles and assessment of mechanical properties of cornea.

The magnetic resonance segment is expected to grow at the fastest rate during 2019 to 2026 owing to its non-invasive nature. This modality is emerging as the most preferred technique to diagnose liver diseases. Increasing adoption of magnetic resonance elastography due to its accurate results and painless procedure is contributing toward the growth of this segment. Magnetic resonance elastography is an effective tool used for diagnosis of advanced liver fibrosis. Hence, MRE helps to gauge the severity of liver disease and thus helps in determining the proper course of treatment.

The radiology segment is anticipated to lead the elastography imaging market in the forthcoming years owing to increasing use of elastography in radiology ultrasound and image-guided radiotherapy. General imaging applications of radiology comprise cancer diagnosis and/or treatment, abdominal ailments, and injuries of soft tissue.

Easy availability of elastography systems on a global scale is expected to augment demand for these systems. Furthermore, increasing cases of different types of cancers, especially breast cancer, is expected to boost demand for radiology treatment during the forecast period.

Cardiology is also expected to grow considerably over the course of the forecast period owing to rising incidences of cardiac disorder cases on a global scale. Moreover, increasing disposable income of consumers and improving healthcare facilities in emerging economies is anticipated to boost segment growth.

The obstetrics segment is expected to witness low to limited growth due to strict government regulations pertaining to the use of obstetric ultrasound devices. This could threaten market growth. However, growing incidences of prostate cancer and rising cases of vascular disorders are expected to give the market for urology and vascular lucrative opportunities for growth. 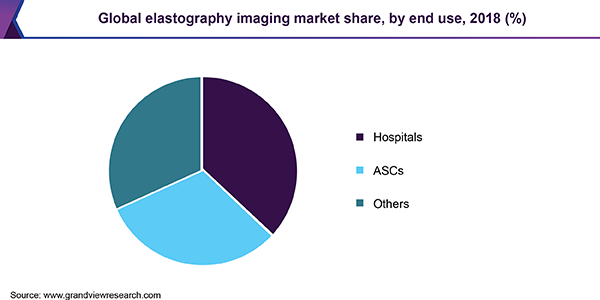 Increasing adoption of non-invasive surgical and diagnostic procedures in these facilities by professionals is expected to drive the segment during the forecasted period. In addition, growing adoption of automation among surgeons and other specialists is anticipated to augment demand for these systems in different hospital settings.

Rising number of image-guided surgeries operated in ambulatory surgical centers is expected to drive the segment. Increase in number of emergency cases is also fueling the adoption of elastography imaging in these settings.

North America is anticipated to hold the maximum share in the elastography imagingmarket during the forecast period owing to presence of a large number of global players in the region. Moreover, increasing efforts by manufacturers for commercialization and growing importance among end users for the use of these systems in different countries is driving the regional market.

High healthcare expenditure in most developed countries in Europe is driving the market. In addition, rising government initiatives for cancer screening, including the use of ultrasound devices with elastography, is contributing to market growth.

Asia Pacific is also expected to witness steady growth over the forecast period. Increasing geriatric population, improving healthcare services, and rapid economic growth are factors expected to drive the regional market. Growth in Asia Pacific is majorly contributed by economies such as India, Japan, and China due to speedy expansion of healthcare facilities. Furthermore, increasing awareness among the public concerning therapeutic potential of ultrasound technologies and accurate and speedy results provided by these devices is contributing to the regional market.

Key players are focusing on developing strategic alliances in the form of partnerships or collaborations to develop new designs and expand their product portfolio. For instance, recently, GE Healthcare expanded its collaboration with SonoSim. This collaboration is aimed at enhancing education with respect to ultrasound among its users.

This report forecasts revenue growth at global, regional, and country levels and provides an analysis on latest industry trends in each of the sub-segments from 2015 to 2026. For the purpose of this study, Grand View Research has segmented the global elastography imaging market report on the basis of modality, application, end use, and region: