The global electrical insulation coatings market size was valued at USD 2.0 billion in 2015 and is anticipated to witness significant growth in the coming years. Rising electricity demand has resulted in upcoming projects focused on capacity expansions, along with increasing investment in power generation projects. Positive growth of the global transmission and distribution market is another factor anticipated to play a vital role in supporting the growth.

Unstable raw material cost and high cost of formulations are expected to pose a major challenge to market participants. China is a major producer of resin as well as powder coatings. Slow economic growth, regulations related to volatile organic compounds, and lack of government support are some of the key factors that have affected the supply of quality raw materials from China. These factors are likely to result in higher production cost of enamels. 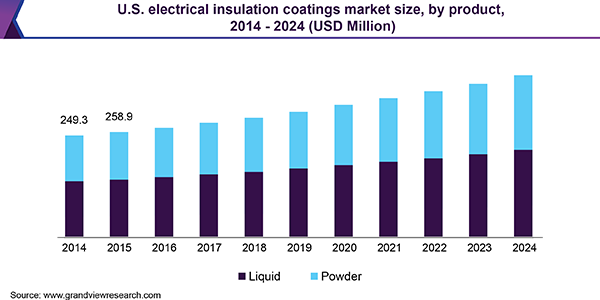 The market is highly competitive due to the presence of a large number of industry participants. Divestiture of the coatings businesses by key market players is a major trend witnessed throughout the industry. Uncertain economic conditions and stringent regulation related to volatile organic compounds emission are likely to pose a major challenge to the majority of industry participants.

Market players are focusing on the development of various types of coatings, depending upon the application, dielectric properties desired, aesthetics, color, and regulatory compliance. Thus, developing new formulations that suit specific applications results in high cost of formulation.

Electrical insulation coatings are largely available in the liquid form. The liquid product segment held the largest market share in terms of revenue as well as volume in 2015. However, liquid based coating is anticipated to lose its market share to powdered based formulations over the forecast period owing to factors such as faster curing time, no requirement for solvents, and their ability to emit zero volatile organic compounds.

The power segment is anticipated to expand at a volume-based CAGR of 4.0% over the forecast period. Epoxies are used in powdered as well as resin forms. Due to high dielectric properties, epoxy powder coatings help in negating high voltage spikes, especially when used in cable insulations.

Epoxy accounted for over 50.0% share of the overall volume in 2015. This raw material is known to have excellent dielectric properties, dimensional stability, good shock, and vibration resistance. Favorable properties such as high thermal stability, mechanical strength, moisture resistivity, adhesion, and electrical, mechanical, and heat resistance make them suitable for various applications. 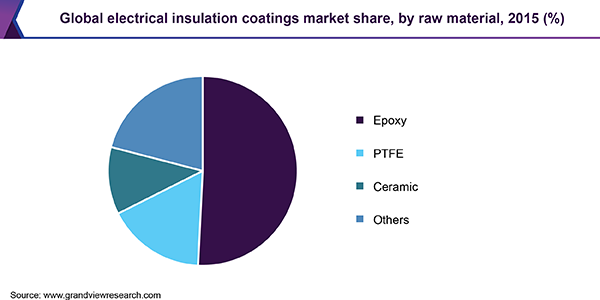 The PTFE segment is expected to expand at an estimated CAGR of 3.5% in terms of volume during the forecast period. Polytetrafluoroethylene (PTFE) is another major raw material. China is a key player in the PTFE market. Government support for PTFE resin manufacturers has been declining, which may affect the segment growth in the coming years.

Asia Pacific accounted for over 50.0% share of the global volume in 2015. The regional market is expected to maintain its lead over the forecast period. Growth in this region can be attributed to rapid urbanization, increasing investment in infrastructure development, and robust economic growth in India and China. Easy availability of raw materials, particularly in China, is expected to increase the demand.

The global market is highly competitive due to the presence of a large number of industry participants. Divestiture of these businesses mainly to focus on their core competencies is a key trend followed by major corporations across the industry. For instance, DuPont sold its performance coatings business that was later rebranded as Axalta Coating Systems.

Threat of substitutes is expected to be moderate as few companies have introduced insulation films to gain a competitive edge. Limited application of these films is expected to hinder their market growth.

Companies such as Elantas GmbH, 3M Company, PPG Industries, AkzoNobel N.V., and Evonik Industries have established themselves as key industry participants. Factors such as high integration throughout the value chain and global presence have helped these companies to expand their product portfolio, thus giving them a competitive advantage over other players.