The global bioelectric medicine market size was valued at USD 20.1 billion in 2021 and is expected to expand at a compound annual growth rate (CAGR) of 5.8% from 2022 to 2030. The growing prevalence of chronic and acute conditions, increasing geriatric population, product advancements, and initiatives by key companies and organizations are major factors driving the market. In January 2022, the Alliance for Advancing Bioelectronic Medicine launched the first Bioelectronic Medicine Day comprising a health awareness campaign. The campaign supported the efforts and advancements within the field of bioelectronic medicine. 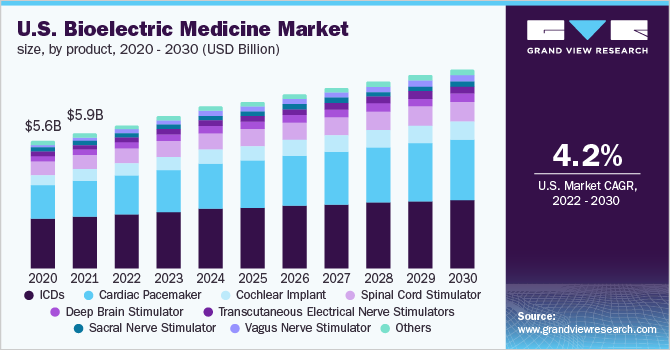 Bioelectric medicine combines bioengineering, molecular medicine, and neuroscience to develop nerve-stimulating technologies for the regulation of biological processes during the treatment of disease. The rising prevalence of chronic diseases such as cardiac and neurological disorders is expected to be the major factor driving the market. As stated by the CDC, annually, around 610 thousand people die due to heart diseases in the U.S. Amongst them, about 370 people die because of coronary heart disease (CHDs). Thus, there is a high demand for advanced bioelectric medicine for the treatment of these chronic disorders, which is expected to boost market growth.

According to the CDC report 2017, Cardiovascular Diseases (CVDs) are a major cause of death in the U.S. One-fourth of all deaths are likely to be caused by CVDs. Stroke and IHD are major causes of more than 80% of all CVD-related deaths. Furthermore, the economic burden of CVDs is likely to be around USD 1,044 billion by 2030. Increasing investments in R&D by manufacturers and the growth rate of regulatory approvals for new electroceuticals/bioelectric medicines are other major factors contributing to the growth of the market. For instance, in December 2018, InterStim Smart Programmer was used with the InterStim System used for sacral neuromodulation therapy. Medtronic pioneered sacral neuromodulation and this product enhancement was expected to help the company strengthen its market foothold.

Stringent government rules and regulations for the development and manufacturing of medical devices including implantable cardioverter defibrillators, cardiac pacemakers, and neuromodulation devices could hinder the growth of the market. The devices undergo rigorous clinical trials before a PMA (premarket approval), which causes a significant rise in the costs incurred by the manufacturers. In addition, product recalls are a major challenge faced by manufacturers, which could adversely affect the market growth.

In 2021, the implantable cardioverter defibrillators segment held the largest revenue share of over 35.0% due to the high application of these products for arrhythmia. In addition, the increasing incidence of sudden cardiac arrests, a rising geriatric population, and advanced product development are expected to boost the market growth. The deep brain stimulators segment is expected to witness lucrative growth over the forecast period owing to the escalating prevalence of Parkinson's disease and lifestyle-induced disorders such as obesity and depression.

According to the European Parkinson's Disease Association (EPDA), around 6.3 million patients are suffering from Parkinson’s worldwide, of which 1.2 million patients are located in Europe. The sacral nerve stimulators segment accounted for a significant revenue share in 2021 owing to product advancement and new product launches by companies. In August 2018, Nevro Corp. received an FDA approval for the new Senza II SNS System. This launch helped the company expand its product portfolio in the neuromodulation and pain treatment segments.

Implantable electroceutical devices held the largest revenue share of over 85.0% in 2021 owing to the large application of these products for the treatment of arrhythmia, chronic pain, ischemia, depression, tremor, and sensorineural hearing loss. Based on type, the market for bioelectric medicine has been segmented into implantable and non-invasive electroceutical devices. Manufacturers are focusing on launching advanced products to cater unmet needs of the customers. For instance, in August 2018, Biotronik advanced arrhythmia detection and diagnosis with MoMe cardiac monitor designed to increase early detection and diagnosis of cardiac arrhythmias.

The non-invasive electroceutical devices segment is projected to witness the highest growth during the study period. This is due to technological advancements and rising investments in R&D by companies for innovative product development. Moreover, increasing healthcare awareness and popularity of electroceuticals in developing countries such as India, China, South Africa, and Argentina are expected to propel market growth.

The arrhythmia segment dominated the overall market with a revenue share of over 65.0% in 2021. This is due to the rising prevalence of arrhythmia that involves the use of implantable cardioverter-defibrillators and cardiac pacemakers for the treatment. The epilepsy application segment is projected to register a lucrative CAGR over the forecast period due to the advancement in treatment options such as vagus nerve stimulators. The companies and research institutes are focusing on innovative product development.

For instance, in January 2017, Hennepin County Medical Center (HCMC) launched clinical trials for the treatment of brain injury by using vagus nerve stimulation. Sensorineural hearing loss is another major segment, which accounted for a considerable revenue share in 2021. The rising number of patients suffering from hearing loss is the major growth driver of this segment. According to the NIH, in 2018, almost one in every three people in the age group of 65 to 74 has hearing loss, while nearly half of the population older than 75 had hearing difficulty.

The hospital segment held the largest revenue share of over 90.0% due to the rising burden of chronic diseases including arrhythmia, epilepsy, Alzheimer’s, retinitis pigmentosa, chronic pain, and depression, needing frequent or seldom hospitalization. For instance, as stated by the WHO, approximately 50 million people in the world are suffering from epilepsy and this number is expected to increase in the near future owing to a growing number of car accidents and other traumatic injuries. The increasing population and developing healthcare infrastructure have spurred the demand for bioelectric medicines. Increasing disposable income and the presence of advanced medical devices for the treatment of different severe diseases are expected to drive the application of electroceuticals in hospitals. 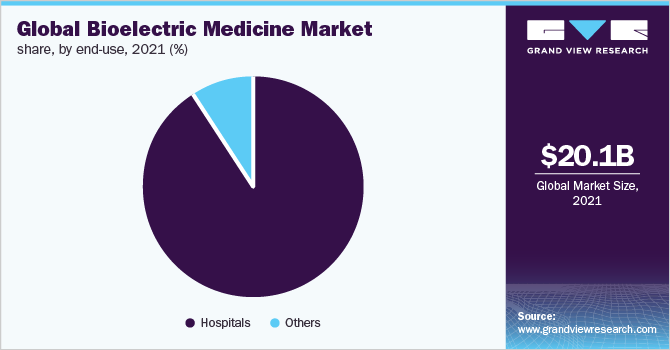 The other segment includes research institutes and homecare. This segment is projected to exhibit a significant CAGR over the forecast period due to the rising investment in R&D for new product development. In addition, rising funding by the government for bioelectric medicine supports the market growth. For instance, in October 2016, the National Institutes of Health declared the funding of around USD 20 million for electroceuticals research.

North America dominated the market with a revenue share of over 35.0% in 2021 due to the presence of medical device manufacturers such as Abbott and Boston Scientific Corporation. Moreover, the highly developed healthcare system and the availability of advanced products in this region have fueled the growth of the regional market. North America was followed by Europe owing to the growing demand for innovative medical devices for the treatment. The presence of big bioelectric medicine manufacturers and highly developed healthcare infrastructure are expected to remain major driving factors for the market.

The Asia Pacific region is projected to exhibit the highest CAGR during the forecast period due to the rising geriatric population in Asian countries such as China and India. In addition, the prevalence of chronic diseases including cardiac arrhythmias, Alzheimer's disease, Parkinson's disease, and epilepsy is rising in this region, which is expected to drive the adoption of electroceuticals.

The market is highly fragmented with the presence of a large number of manufacturers. Major manufacturers provide an extensive range of advanced electroceuticals through their strong distribution channels across the globe. It has resulted in intense competition amongst manufacturers and led to high pressure on the pricing strategies of vendors, which is expected to affect the profit margin. The leading players are involved in new product development, collaborations, mergers & acquisitions, and regional expansions to capture a greater revenue share in the market. New product development and launches help companies to expand their existing product portfolio and geographical reach.

For instance, in December 2018, ElectroCore Inc. received FDA Approval for gammaCore for the treatment of cluster headaches. The product is the only FDA-approved pharmacological treatment for the disorder. Moreover, in June 2019, Boston Scientific Corporation acquired Vertiflex, Inc. The acquired company is focused on minimally invasive technology that helps alleviate pain and restore the physical function of lumbar spinal stenosis. The deal is anticipated to strengthen the spinal cord stimulation and radiofrequency ablation portfolio. Some prominent players in the global bioelectric medicine market include:

This report forecasts revenue growth at the global, regional, and country levels and provides an analysis of the latest industry trends and opportunities in each of the sub-segments from 2017 to 2030. For this report, Grand View Research has segmented the global bioelectric medicine market report based on product, type, application, end-use, and region:

Who are the key players in bioelectric medicine market?

What are the factors driving the bioelectric medicine market?

b. Key factors driving the bioelectric medicine market growth include the growing prevalence of chronic and acute conditions, the increasing geriatric population, product advancements, and initiatives by key companies and organizations.

How big is the bioelectric medicine market?

What is the bioelectric medicine market growth?

Which segment accounted for the largest bioelectric medicine market share?

b. North America dominated the bioelectric medicines industry with the largest revenue share in 2021 due to the presence of medical device manufacturers such as Abbott and Boston Scientific Corporation. Moreover, the highly developed healthcare and availability of advanced products in this region have fueled growth.