The global Electrodes for medical devices market size was valued at USD 775.8 million in 2016 and is expected to grow at a CAGR of 11.3% during the forecast period. Increasing prevalence of diseases such as Parkinson’s Disease (PD), Alzheimer’s, Trigeminal Neuralgia (TN or TGN), sinusitis, tinnitus, Raynaud's disease, fibromyalgia, heart disorders, brain disorders, circulatory disturbances, gout, body ache and surge in minimally invasive surgeries are expected to drive the market growth. Also, technological advancements in medical electrodes and growing demand for portable medical devices to curb the rising hospital & healthcare-associated costs are key drivers that are likely to govern market growth worldwide.

According to the Parkinson's Disease Foundation, more than 10.0 million individuals are currently suffering from Parkinson’s disease across the world. Besides, about 60,000 Americans are diagnosed with Parkinson's every year. This disease is also highly prevalent in Europe (nearly 1.6 million) and China (about 1.7 million). The increasing prevalence of this disease is anticipated to propel the market growth over the forecast period.

Besides, the advent of advanced products such as dry and wet electrodes are gaining acceptance from users due to their property of adhering to the skin. Furthermore, the use of textile electrodes by attaching them to shirts or other forms of clothes for continuous cardiac monitoring by athletes and soldiers to monitor their heart activities is expected to contribute to the electrodes for medical devices market growth over the forecast period.

Portable medical devices are gaining traction globally as they offer benefits such as extended care and remote monitoring from the doctor’s clinic at the patient’s home in case of management of chronic diseases. Conditions such as heart diseases and diabetes are managed at economic rates, as it reduces the number of visits to the doctor or hospitals, thereby propelling the market growth during the forecast period.

On the contrary, stringent regulatory framework and the guidelines offered by regulatory bodies associated with medical electrodes are expected to restrain the market growth over the forecast period.

The key types analyzed in this study are diagnostics and therapeutics. The diagnostics segment dominated the industry in 2016 and is expected to witness lucrative growth over the forecast period. The increasing prevalence of cardiac disorders, neurological diseases, and fetal distress syndrome globally result in the rising need of diagnostic electrodes and is anticipated to support growth.

The diagnostic segment is further classified into Electrocardiogram (ECG), Electroencephalogram (EEG), Electromyogram (EMG), Electroretinogram (ERG), fetal scalp, and others. The ECG electrodes are portable, conductive, and adhesive. Hence, they find extensive applications in capturing and storing patients’ heartbeats. Increasing the use of these electrodes is expected to contribute towards significant growth for the next nine years.

The therapeutics segment is further classified into pacemaker, Transcutaneous Electrical Nerve Stimulator (TENS), defibrillator, electrosurgical, and others. The statistics published by the World Health Organization (WHO) stated that cardiovascular diseases (CVDs) are one of the leading causes of death across the world. In 2012, CVDs resulted in nearly 17.5 million deaths, accounting for about 31.0% of the total deaths. This increasing prevalence is propelling the demand for pacemaker electrodes and is anticipated to register significant CAGR during the forecast period.

Global Electrodes for the medical devices market, by type, 2016 (%) 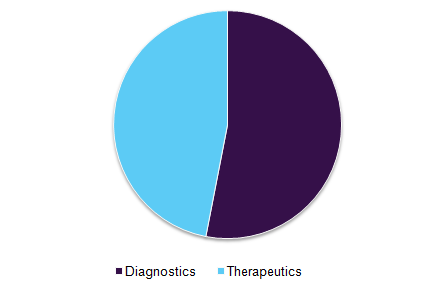 North America held over 40.0% share in the medical electrodes market in 2016 owing to the increasing prevalence of CVDs, changing lifestyles of individuals, and the presence of the target population in the U.S. and Canada. North America and Europe are expected to collectively contribute towards the growth of this vertical owing to the presence of technologically advanced electrodes such as hydrogel and dry electrodes that provide improved adhesion capability and better conduction features as compared to gel-based electrodes.

The Asia Pacific region is anticipated to exhibit a higher CAGR over the forecast period as compared to other regions. This can be attributed to initiatives undertaken by various governments to create a free and open economy. For instance, the Indian government implemented Goods and Services Tax (GST) to avoid the cascading effect or double taxation, thereby making it easier to start & expand businesses and comply with the tax regulations. The recently introduced economic reforms in China promotes a well-balanced & open economy and witnessed a significant impact in shaping the global economy in 2016, thus creating investment opportunities for market players in the country.

This report forecasts revenue growth and provides an analysis of the latest trends in each of the sub-segments from 2014 to 2025. For this study, Grand View Research, Inc. has segmented the global electrodes for medical devices market based on type and region:

How big is the electrodes for medical devices market?

b. The global electrodes for medical devices market size was estimated at USD 1.06 billion in 2019 and is expected to reach USD 1.18 billion in 2020.

What is the electrodes for medical devices market growth?

Which segment accounted for the largest electrodes for medical devices market share?

b. North America dominated the electrodes for medical devices market with a share of 43.64% in 2019. This is attributable to rising increasing prevalence of CVDs, changing lifestyles of individuals, and presence of a huge target population in the U.S. and Canada.

Who are the key players in electrodes for medical devices market?

What are the factors driving the electrodes for medical devices market?

b. Key factors that are driving the market growth include rise in the prevalence of Parkinsonâ€™s Disease (PD), heart diseases, Alzheimerâ€™s disease, Trigeminal neuralgia (TN or TGN), sinusitis, and Raynaud's disease, and introduction of technological advancement in medical electrodes.