The global pacemakers market size was valued at USD 4.4 billion in 2021 and is estimated to expand at a compound annual growth rate (CAGR) of 3.4% from 2022 to 2030. Rising incidences of CVDs, increasing cost of cardiac disease management, favorable government policies, and the launch of technologically advanced pacemakers such as the MRI safe pacemakers and leadless pacemakers are chiefly driving the growth in the market. The rising burden of cardiovascular diseases is one of the key factors for the growth of the market. Coronary heart disorder is one of the primary reasons for CVD deaths globally. The economic burden of these diseases is anticipated to be more than USD 1,044 billion by 2030, which highlights the great need for cardiac pacing devices. 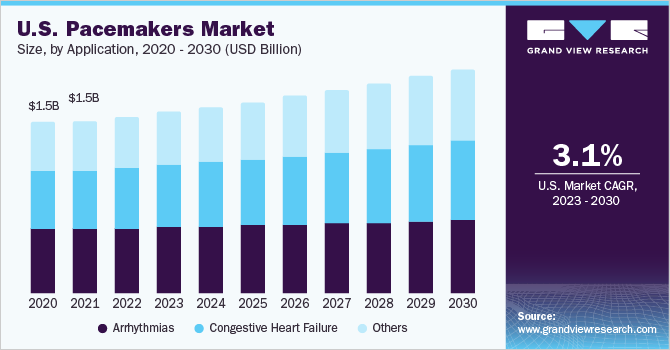 The novel coronavirus had severely affected patients suffering from cardiovascular disease. The spread of COVID-19 had triggered a humongous economic impact on the healthcare and medical device industry. As per the American Heart Association, Circulation Journal, 2020, so far COVID-19 had affected 185 countries and more than 30,00,000 patients globally. Among patients with COVID-19, there is a high prevalence of CVD. Increasing demand to improve patient outcomes for various pacemaker implantations, with improved and minimally invasive procedures is the key factor driving the growth of the pacemaker market. Moreover, favorable reimbursement procedures, such as the Medicare system in the U.S. and NHS in the U.K. are among the key factors boosting the market.

Medical device companies such as Boston Scientific Corporation and Medtronic are now offering new products that are covered under reimbursement packages, which benefit patients. Furthermore, organizations are more fixated on manufacturing high-end pacemakers catering to customized care. These innovations are enhancing accuracy, providing additional capabilities to enhance the workflow, and facilitating error reduction. For instance, in May 2020, the home monitoring system by BIOTRONIK offered a cost-effective and safe remote management of pacemaker patients at the Large Multi-Center Study. This is a significant move for routine remote follow-ups amidst COVID-19.

The implantable pacemakers segment held the largest share of more than 60% of the pacemakers’ market in 2021. Implantable pacemakers are further classified into a single chamber, biventricular pacemakers, and dual-chamber. The growing demand for these devices for the treatment of heart failure and arrhythmias as well as ongoing clinical trials is a major factor leading to market growth. In 2017 atrial fibrillation was the most common form of arrhythmia, affecting approximately 2.7 to 6.1 million people in the U.S alone as per the CDC. Thus, the market growth is driven by an increasing prevalence of CVDs.

In terms of revenue, the conventional pacemakers segment dominated the market and accounted for the largest revenue share of over 51.0% in 2021. This growth is owing to continuous upgradations, affordability, small-sized, and elongated shelf life. Based on type, the market is segmented into MRI compatible and conventional pacemakers. The MRI compatible pacemaker segment is expected to show lucrative growth during the forecast period. The high share is attributable to increased MRI-based diagnosis. As per the Mayo Foundation for Medical Education and Research, 2018, approximately 75% of patients who are currently having an implantable pacemaker will need MRI during their lifetimes. Hence, the segment is witnessing high growth.

The arrhythmias segment dominated the pacemakers market and held the largest revenue share of 37.6% in 2021. The segment is further divided into atrial fibrillation, heart block, and long QT syndrome. Factors such as lifestyle disorders, excessive alcohol consumption, smoking, and obesity are contributing to the prevalence of cardiac arrhythmia. As per the European Medical Group LTD, 2019, the total prevalence of people with atrial fibrillation and atrial flutter is 12,32,144 in the U.K. The congestive heart failure segment is the second-fastest-growing segment during the forecast period. As per the CDC, in December 2019, nearly 6.5 million adults in the U.S. suffer from heart failure. Thus, increasing the incidence of heart failure has fueled the demand for technologically advanced pacemakers during the forecast period. 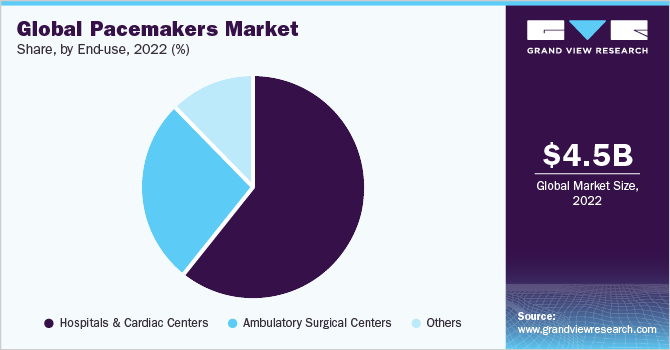 North America dominated the market for pacemakers and accounted for the largest revenue share of around 42.4% in 2021. This growth is owing to the increasing elderly population with cardiac problems, the presence of key players, rapid technological advancements such as MRI compatible pacemakers, Bluetooth enabled pacemakers, and improving regulatory approvals. The incidence of cardiovascular disorders, such as cardiac arrests, congestive heart failure, and arrhythmias is increasing rapidly in the U.S., which is further driving the demand for pacemakers in the region. Moreover, technological advancements in the healthcare sector and the increasing number of heart-related surgeries are driving the market in the region.

In Asia Pacific, the market is likely to exhibit a lucrative CAGR of around 4.8% over the estimated period. This growth of the market in the region is owing to market penetration by the key players, and massive untapped opportunities are driving the growth. Furthermore, investments in the healthcare sector, especially in Japan, China, and India have gained traction. These countries are progressively focused on developing vigorous healthcare facilities for cardiovascular diagnosis and treatment. Such factors are anticipated to drive market growth in the coming years. Growing economies and populations in developing countries including China and India are expected to create substantial opportunities for the market in the region.

Key companies undertook various strategic initiatives such as product launches, mergers and acquisitions, and partnerships and collaborations to gain more penetration. For instance, in June 2021, Medtronic launched the Micra AV, a self-contained, miniaturized pacemaker for delivering advanced pacing technology for atrioventricular (AV) block patients through a minimally invasive approach. Some of the prominent players in the pacemakers market include:

This report forecasts revenue growth at the global, regional, and country levels and provides an analysis of the latest industry trends in each of the sub-segments from 2017 to 2030. For the purpose of this report, Grand View Research has segmented the global pacemakers market report on the basis of product, type, application, end-use, and region:

How big is the pacemaker market?

What is the pacemaker market growth?

Which segment accounted for the largest pacemaker market share?

b. North America dominated the pacemaker market with a share of 42.4% in 2021. This is attributable to developed healthcare infrastructure, the presence of planned reimbursement structure, greater per capita healthcare spending, and higher awareness among the population about advanced technologies.

Who are the key players in pacemaker market?

What are the factors driving the pacemaker market?

b. Key factors that are driving the pacemaker market growth include the increasing prevalence of cardiovascular diseases (CVDs), technological advancement, and the availability of reimbursement for the implantation of pacemakers.