The global epigenetics drugs and diagnostic technologies market size was valued at USD 5.24 billion in 2017 and is projected to expand at a CAGR of 19.7% over the forecast period. High prevalence of cancer and other chronic diseases along with rising geriatric population are some of the key factors expected to boost the market. Organizations, such as the International Human Epigenome Consortium (IHEC), the National Cancer Institute (NCI), and the National Institute of Health (NIH) promote funding and support to R&D and product development exercises pertaining to the field of epigenetics. This factor is anticipated to further fuel the expansion.

The NIH funds epigenetics research through the Common Fund Epigenomics program, which actively provides support for research, worldwide. Rising need to understand epigenetic modifications at the molecular level and development of therapeutic solutions are anticipated to motivate these organizations to fund R&D programs. In addition, endeavors such as the Epidemiology and Genomics Research Program (EGRP) in the NCI's Division of Cancer grants research initiatives owing to novel epigenetic research that serves as a driving force for market growth. 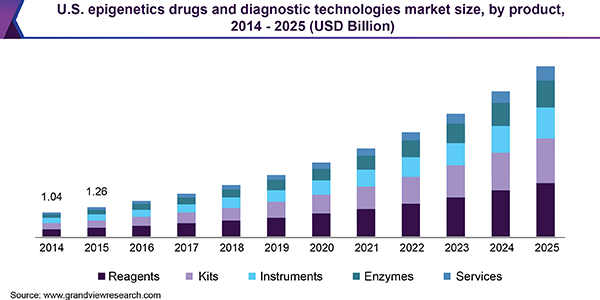 According to the estimations based on a 2011 - 2015 statistic report by the National Cancer Institute (NIH), the estimated number of cancer deaths in the U.S. is around 163.5 per 100,000 men and women per year. Incidence rate, mortality and survival statistics, information on cancer symptoms, risk factors, early detection, and early treatment are among the key factors for the high prevalence of the disease.

The International Cancer Genome Consortium (ICGC) is focusing on obtaining the genomic description, epigenomic changes, and transcriptomic changes in different types of tumors. The Encyclopedia of DNA Elements (ENCODE) project was launched by the U.S. national human genome research institute to identify all the human genome sequence functional elements.

The International Human Epigenome Consortium (IHEC), built by the NIH is also involved in the development of data generation and analysis, which can be made useful for epigenomic researchers. Majorly, epigenetics research is focused on the identification of treatment options for various types of tumors.

Reagents dominated the product segment of the epigenetics drugs and diagnostic technologies market in 2017. Histone and DNA modifiers are the major types of reagents. Epigenetic reagents are segmented into antibodies, PCR reagents, histones, primers, electrophoresis reagents, nucleic acid analysis reagents, buffers, and others.

PyroMark Q24 is one of the advanced reagents featuring advanced pyrosequencing chemistry to provide even better real-time sequence-based detection and quantification than before. The existence of a number of technology platforms facilitates analysis at the gene, protein, or cellular levels, which leads to innovation in the market.

The kits product segment was observed to be the fastest-growing segment over the forecast period. The ready-to-use kits are manufactured by many biotechnology companies for the detection of epigenetic modifications. Kits available in the market range from kits for nucleic acid purification, analysis of DNA methylation status, and detection of histone modifications by various enzymes to kits for chromatin immunoprecipitation.

Epigenetic diagnostic kits are used for the diagnosis of disorders due to epigenetic modifications in the early stages and during treatment to check the efficacy of therapeutics. They work on the basis of immunoprecipitation by the involvement of modification-specific monoclonal antibodies.

Histone Acetylation is expected to witness the fastest growth over the forecast period. Their enhanced efficacy due to the introduction of novel mechanisms can be attributed to this growth. Histone acetylation is the enzymatic incorporation of an acetyl group to lysine residues.

Based on the type of epigenetic therapies, the market is segmented into Histone Deacetylase (HDAC) inhibitors and DNA Methyltransferase (DNMT) inhibitors. The DNMT inhibitors were the largest revenue-generating segment in 2017 owing to factors such as wide-scale availability in most regions. Furthermore, a high number of generics are available in this therapy class, which is anticipated to bode well for segment growth.

The HDAC inhibitors are estimated to be the fastest-growing segment over the forecast period, owing to factors such as the presence of strong product pipeline and commercial availability of the maximum number of products. In addition, from 2014 to 2015 three HDAC inhibitors were launched in the market, which is further likely to accelerate the growth of this therapy class over the forecast period.

Oncology was the largest revenue-generating segment in 2017. Increasing prevalence of cancer and the number of deaths caused by cancer is expected to be a high rendering driver for this growth. Furthermore, this segment is projected to gain a major revenue share over the forecast period owing to the introduction of new products and the potential future commercialization of products currently in the pipeline.

Hypermethylation and epigenetic silencing are known as epimutations, occurring due to epigenetic changes. Epimutations have been known to be involved in the etiology of cancers. Extensive R&D for detecting epimutations, specifically related to the silencing of tumor suppressor genes and activation of oncogenes, is anticipated to create growth avenues. 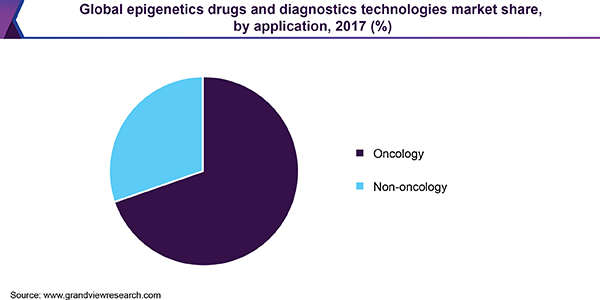 North America is the dominant region segment of this market. It held over 39.34% of the market share in 2017. The presence of government funding programs for ongoing research activities, better healthcare facilities, and constantly growing geriatric population are some of the prominent driving factors. In addition, the Common Fund-supported programs in the U.S. are likely to boost the research activities for a broad range of oncology and non-oncology diseases including metabolic, inflammatory, cardiovascular, and other diseases.

Asia Pacific is estimated to be the fastest-growing region over the forecast period owing to the rising disposable income, high unmet clinical needs, rising awareness about early diagnosis, and availability of effective treatment in emerging countries, such as India and China. Asia Pacific is in limelight due to increasing cases of various types of cancers.

Growth in the geriatric population is one of the leading causes of the increasing cases of oncology and chronic diseases. This is expected to further boost the regional market. The R&D initiatives related to the analysis of epigenetic base in various diseases are on the rise in this region. EpiGen Research Consortium based in U.K. has extended its research facility in Singapore for research on chronic diseases such as diabetes and obesity.

For instance, in March 2015, Illumina, Inc. collaborated with Merck Serono to develop a universal next-sequencing-based oncology diagnostic with an aim to further strengthen their position in the market. The collaboration will enable the companies to increase their market share and to gain a prominent position in the market over the forecast period.

This report forecasts revenue growth at global, regional, and country levels and provides an analysis of the latest industry trends in each of the sub-segments from 2014 to 2025. For the purpose of this study, Grand View Research has segmented the global epigenetics drugs and diagnostics technologies market report based on the product, technology, type of therapy, application, and region: