The global epoxy coating market size was estimated at USD 21.52 billion in 2015, growing at a CAGR of 7.8% from 2016 to 2024. The market is expected to gain traction over the forecast period on account of rising demand from paints and coatings industry owing to improved durability and superior toughness.

Rising emphasis by the regional governments on reducing VOC content in the epoxy-based paints and coatings in developed economies including the U.S. and Europe is anticipated to accelerate industry demand. Epoxy coating is exclusively used to enhance the shelf-life of the structural steel which is further expected to propel market demand over the projected period. 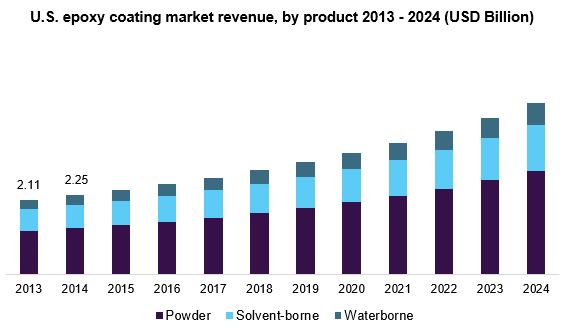 In the U.S., solids epoxy segment emerged as a dominant segment in 2018, accounting for 58.6% of the total revenue share. This can be attributed to its preference over concrete floors for a wide variety of commercial and industrial applications including retail stores, manufacturing & industrial plants, showrooms, garages, hospitals, and warehouses. They result in a glossy and long-lasting flooring solution.

Epoxy based coatings account for a significant share in the paints and coatings application on account of properties such as superior resistance to UV light, abrasion, heat, improved dimensional stability, and toughness. In addition, excellent adhesion to a variety of substrate surfaces including metal, glass, and fiber is likely to fuel demand.

Increased demand for VOC free powder and fusion bonded epoxy coatings from industries including household appliances and pipeline construction on account of superior sealing, and corrosion prevention is expected to propel the market over the next eight years. Rising R&D activities coupled with growing investments to develop environment-friendly bio-based epoxy resins are expected to create new opportunities over the projected period.

Rising demand for energy efficient green buildings coupled with growing emphasis on improving the indoor air quality and occupant health in these buildings is expected to augment demand for low VOC waterborne epoxy coating over the forecast period. However, volatile price of epoxy resins owing to fluctuating raw material prices is expected to restrain the growth in the near future.

Solid epoxy product segment emerged as dominant segment in 2015, accounting for 60.2% of the overall industry share. The segment is expected to gain momentum owing to its versatility across a wide range of applications such as commercial, industrial, decorative, flooring, non-slip and heavy industrial.

Solvent borne epoxy segment was the second largest product that accounted for 26% of the total revenue share in 2015. Growing industrialization coupled with the increase in the use of steel in industrial plant structure fabrication will be the key drivers for the growth of solvent borne coatings. Solvents allow easy applicability of coatings on films without causing any surface tension.

Waterborne coatings segment is expected to witness a high growth rate over the forecast period owing to its use for moisture barrier applications. In addition, strict environmental regulations directing the reduction of VOC content in paints & coatings are expected to propel segment demand over the projected period.

Government regulations to meet clean air standards have provided an impetus for coating formulators to increase waterborne coatings usage. Widening application scope in all sorts of industrial applications such as maintenance coatings for concrete and steel is anticipated to positively impact demand.

Transportation segment emerged as a dominant application in 2015, accounting for 29.4% of the total revenue share. Rising demand for vehicles owing to growing middle-class population and increasing disposable income in the emerging economies such as India is expected to fuel epoxy coatings demand over the forecast period.

Coating act as corrosion inhibitors and help in preventing rust from automotive body parts and other such metal components. Evolving automotive industry in developed regions like North America owing to technological advancements and economic recovery post-recession is further slated to stimulate epoxy coatings to demand as a primer for paint adhesion. 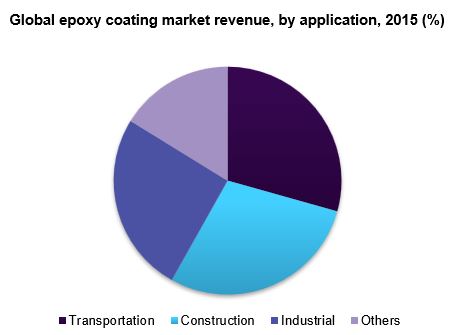 Construction was the fastest growing segment, occupying a majority of the market revenue share in 2015. The increase in usage of epoxy coatings in residential, industrial, and commercial construction is expected to drive the industry demand. Inherent characteristics such as chemical resistance, corrosion resistance, and adhesion to substrates including concrete and metal surfaces are anticipated to impact demand in the construction sector.

Rising use of epoxy coatings in industries including marine and electronics owing to superior properties such as resistance to chemicals, heat, and UV light coupled with durability, strength, and flexibility is expected to drive the industry growth over the next eight years. Epoxy coatings are used extensively in industrial manufacturing plants owing to the aforementioned factors, eventually stimulating demand.

Asia Pacific emerged as a leader in the epoxy market and accounted for 45.6% of the total revenue share in 2015. The region is expected to continue its dominance over the coming years owing to rising demand from industries including manufacturing, automotive, and construction. In addition, increasing construction activities in China, India, and Southeast Asian countries such as Indonesia and Malaysia is expected to drive industry demand over the forecast period.

Automobile manufacturers are shifting their manufacturing base to these countries owing to government incentives and availability of low-cost skilled labor. Rising disposable income coupled with population expansion is anticipated to drive the transportation sector in these economies eventually stimulating epoxy coatings demand.

Europe was the second largest region accounting for 26.45 of the revenue share in 2015. This can be attributed to growing investments by the paints & coatings companies in expanding & improving their manufacturing facilities. Environment- friendly characteristic of epoxy coatings is projected to augment growth in the region.

North America is expected to witness substantial growth over the forecast period owing to rising construction activities on account of low interest on housing loans coupled with the desire to advance public infrastructure to attract tourism. In addition, rising awareness among consumers regarding the benefits of environment-friendly products is expected to provide a fillip to the market growth.