The global ethylene propylene diene monomer market was estimated at USD 4.25 billion in 2021 and is projected to expand at a compound annual growth rate (CAGR) of 5.6% from 2022 to 2030. The growth of the industry is mainly driven by the increasing investment in the automotive sector across emerging economies, such as China, India, and others. The global demand for ethylene propylene diene monomer (EPDM) is anticipated to witness considerable growth over the forecast period on account of the massive expansion of application sectors including automotive and building & construction. Rapid advancements in the construction and automotive industries in the U.S. have led to a surge in the demand for EPDM in the North America region. 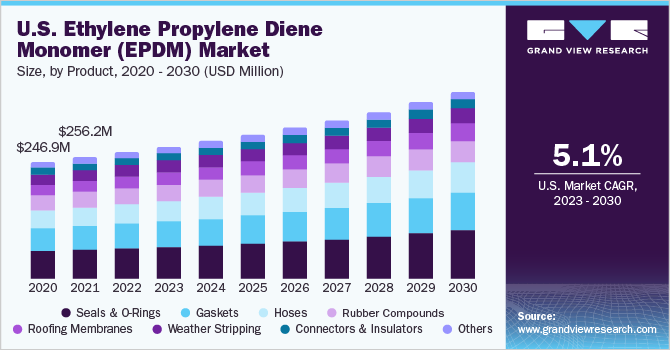 EPDM aids in producing aesthetically enhanced auto parts. In addition, the use of EPDM enables manufacturers to reduce their processing time and maximize profits. This has spiked the interest of regional automotive manufacturers in high-performance EPDM in North America. In the U.S., aerospace is one of the largest industries that is developing and supplying products & services to general aviation, commercial airline, space, and defense markets. The U.S. government’s Aviation Research Grants Program provides grants and cooperative agreements to encourage and support research related to civil aviation's market growth.

According to the Federal Aviation Administration, in 2021, 20 grants with a total of USD 7,346,411.10 were awarded under the Aviation Research Grant Program 2021. This can drive seal manufacturing companies to develop new products aimed at catering to the aerospace market. For instance, in July 2021, scientists at Freudenberg Sealing Technologies developed 80 EPDM 426288, demonstrating superior low-temperature sealing behavior at extreme pressures and temperatures, making it suitable for the manufacture of seals to be used in commercial airliners. Thus, the growing aerospace industry is expected to positively impact the EPDM market in the U.S. aerospace sector over the forecast period.

As part of the region’s growth of hydrogen-powered cars, there has recently been an increasing need for the establishment of hydrogen fueling stations across the United States. For example, in February 2022, Iwatani Corp. of America and Chevron U.S.A., Inc. agreed to co-develop and build 30 hydrogen filling stations in California by 2026. According to the h2stations.org database, North America had 13 active hydrogen refueling stations by the end of 2021. The temperature of hydrogen gas at filling stations must be at -40°C before it can be poured into a car by a dispenser, increasing the requirement for cold-resistant seals.

Since EPDM exhibits superior cold resistance, i.e., retention of elasticity at low temperatures (-40°C), EPDM-based seals can be used at hydrogen fueling stations. Thus, the rising number of hydrogen fueling stations is expected to drive the demand for EPDM-based seals in North America. According to the European Commission, the automotive industry accounts for a share of 7% of the total Gross Domestic Product (GDP) of the European Union. The automotive industry in the region was hit hard in the second half of 2022. This was mainly due to the rising raw material costs, the prevailing semiconductor crisis caused by the material shortage, and the ongoing Russia and Ukraine conflict.

The sanctions imposed on Russia and the logistical constraints have driven tire manufacturers to suspend their operations in most countries of Europe including Russia. For instance, in March 2022 MICHELIN announced suspending production at some of its European plants due to the Russia & Ukraine conflict’s impact on its supply chain. Also, in June 2022, Nokian Tyres plc decided to initiate a controlled exit from the Russian market due to the tightening sanctions, making it unfeasible for the company to continue its operations in Russia.

The seals and O-rings product segment led the industry in 2021 and accounted for the maximum share of more than 18% of the global revenue. Seals and O-rings are used in a wide range of industries for tightly sealing connections in pneumatic systems, hydraulic systems, tubes, and pipes. Several factors, such as sealing pressure, cost, operating conditions, temperature, hardness, and chemical compatibility, have to be considered while manufacturing seals and O rings. EPDM rubber seals and O-rings provide good resistance to water, alcohols, ketones, steam, acids, and automotive brake fluids. In addition, EPDM also provides resistance against compression set, tearing, abrasion, weathering, and aging.

These properties make it suitable for applications, such as automotive brake systems and steam lines. Hoses are used for various applications requiring the transfer of chemicals, water, gases, and hydraulic oils. Hence, they require materials that provide flexibility, hardness, resistance to weathering and ozone, and compatibility with certain fluids. EPDM exhibits excellent resistance to heat, weathering, tear, and ozone. Also, it offers physical and chemical properties similar to silicone and is a cost-effective alternative to other synthetic elastomers as a material for the manufacturing of hoses. Gaskets function as a seal between surfaces and are used for providing cushioning, reducing noise, providing electrical insulation, and stopping leakage.

EPDM possesses high-tensile strength (from 7 to 21 MPa) compared to its alternatives, such as neoprene, nitrile, and silicone. Moreover, its resistance to high temperatures, abrasion, tear, ultraviolet light, wind, weathering, aging, and ozone, as well as good electrical insulation properties, make it a suitable material for the manufacturing of gaskets. The others segment comprises grommets, mandrel-formed drain tubes, window spacers, and belts. Grommets are used to protect wires & cables from sharp edges. Grommets are used in industrial, manufacturing, and construction applications to cover the rough and sharp edges of a hole in metal. The protects other materials as it passes through the hole.

The automotive segment led the industry in 2021 and accounted for more than 42.00% share of the global revenue. Modern automotive manufacturers are trying to downsize the engine and engine compartment to produce fuel-efficient vehicles. The compactness of the engine compartment results in the high temperature of engine components since there is insufficient space for heat dissipation. This is expected to drive the demand for high-performance elastomers, such as silicone and Fluoroelastomers-based gaskets and seals. However, the high price of these elastomers positions EPDM as a cost-effective alternative for gaskets and seals. 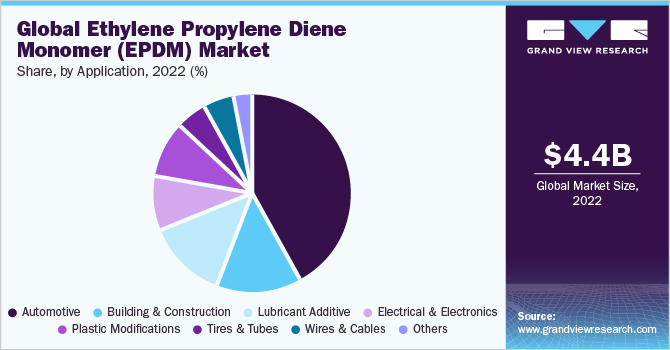 Key applications considered under other segments include emulsions, transportation, heavy industrial equipment, and molded consumer goods. Transportation application includes rail, marine, and aerospace sectors. In marine applications, EPDM sheets are used as surface mats to ease the pressure on ankles and feet since the hard and flat surfaces of yachts and boats can cause fatigue and discomfort. In addition, the EPDM rubber is used in the manufacturing of fenders that protect boats from impacts during berthing/docking.

Asia Pacific dominated the global industry in at 41.0% in 2021 and is projected to expand further at the fastest CAGR of 6.0% from 2022 to 2030. The regional market is primarily driven by the ascending demand for the product from key application industries including automotive, building & construction, and electrical & electronics. The Indian military manufacturing business is an important component of the Indian economy, and it is expanding rapidly as national security concerns develop. The continuing territorial disputes with China and Pakistan over the sovereignty of the states of Arunachal Pradesh and Kashmir, respectively, have increased the demand for defensive equipment in India.

This has resulted in greater usage of synthetic elastomer-based goods by government military product manufacturing agencies, such as the Defense Research & Development Organisation (DRDO). For instance, in August 2022, DRDO announced procuring EPDM-kevlar rubber lining for ASTRA MK-2 air-to-air missile, which will be used to protect the rocket casings from hot gases. Such developments are expected to provide a necessary push for the product demand in defense applications. Central & South America is expected to grow substantially over the forecast period. Changing consumer preferences, low production costs, rapid industrialization, and increasing disposable income are factors anticipated to drive the economic growth of the region over the next few years. 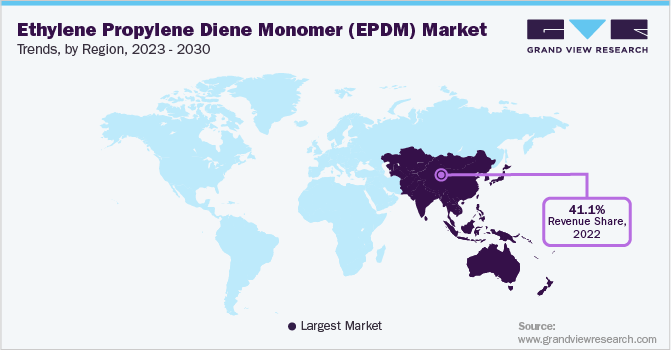 The rising disposable income of consumers and ongoing infrastructure development projects are also expected to drive the growth of the construction industry in Central & South America. This, in turn, would steer the demand for rubber products for matting and roofing applications. An increase in construction activities, particularly in Brazil and Chile, is projected to fuel the demand for EPDM in Central & South America from 2022 to 2030. The Middle East & Africa region is expected to witness substantial growth owing to massive infrastructure development in the U.A.E. and Saudi Arabia.

Rapid industrialization coupled with improving manufacturing industry infrastructure in the Middle East & Africa is expected to impact the demand for EPDM on a positive note. African countries, such as South Africa, Mozambique, and Tanzania, are expected to witness an economic boom on account of abundant raw material availability and rapid industrialization. The East Africa Crude Oil Pipeline (EACOP) Project between Uganda and Tanzania is expected to increase the crude oil production in the region, which, in turn, is likely to fuel the production of EPDM over the forecast period.

The industry has experienced significant competition over the past few years. The presence of large-scale, international manufacturers in the market has intensified the competitiveness among players. The industry is mostly dominated by a few players with large production capacities. Lanxess AG and Exxon Mobil Corp. stood as leading producers of EPDM in the industry. The availability of high-tech machinery coupled with new product launches prompts manufacturers to engage in extensive research & development activities. This, in turn, is likely to pose challenges for the industry participants.

Therefore, manufacturers are compelled to consistently focus on innovations and upgrades to keep up with modern technologies in an attempt to maintain a competitive edge. Mergers & acquisitions, joint ventures as well as production capacity expansions are the most commonly adopted strategic initiatives by leading players to sustain the competition.  For instance, in April 2021, Firestone Building Products Company, LLC was acquired by HOLCIM from Bridgestone Corp. for USD 3.4 billion to strengthen its position in the elastomer market. This acquisition is expected to provide Bridgestone Corp. access to the EPDM product manufactured by Firestone Building Products Company, LLC, and strengthen its product portfolio. Some prominent players in the global ethylene propylene diene monomer market include:

This report forecasts revenue growth at global, regional, and country levels and provides an analysis of the latest industry trends in each of the sub-segments from 2019 to 2030. For this study, Grand View Research has segmented the global Ethylene Propylene Diene Monomer (EPDM) market report based on product, application, and region: 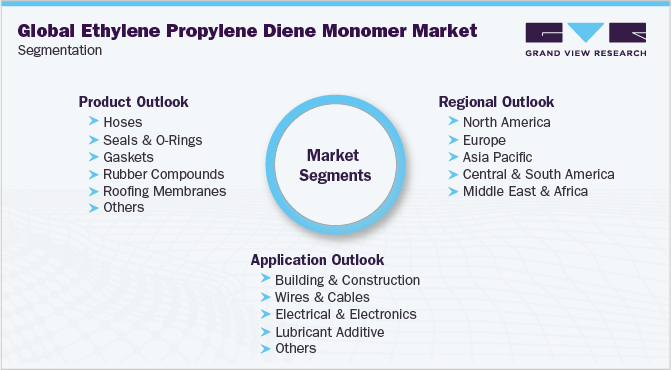 Who are the key players in ethylene propylene diene monomer market?

What are the factors driving the ethylene propylene diene monomer market?

b. Key factors that are driving the market growth include expanding application sectors such as automotive and building & construction, and electrical & electronics.

How big is the ethylene propylene diene monomer market?

b. The global ethylene propylene diene monomer market size was estimated at USD 4.25 billion in 2021 and is expected to reach USD 4.45 billion in 2022.

What is the ethylene propylene diene monomer market growth?

b. The automotive segment dominated the ethylene propylene diene monomer (EPDM) market with a share of more than 42% in 2021. This is attributable to the rising demand for various applications such as hydraulic brake systems, wire & cable harnesses, tubing, window spacers, and others.