The global wires and cables market size was estimated at USD 164.94 billion in 2018 and is expected to expand at a CAGR of 4.9% over the forecast period. Increasing urbanization and rapidly growing building infrastructure are the major factors driving growth. These have impacted the energy and power demand in residential, commercial, and industrial sectors. Increased investments in smart grids and upgrading power transmission and distribution systems are expected to further drive the market. The adoption of smart grid technology has fulfilled the rising need for grid interconnections, significantly resulting in rising investments in the new submarine and underground cables. Also, growing offshore wind farms, high voltage direct current links, and grid interconnections are projected to fuel the growth of the market.

A smart grid is an electric grid, which consists of controls, computers, automation, and new technologies and equipment which function together and provides efficient transmission of electricity. The rising population is leading to an increasing demand for power. To reduce the frequency and duration of power outages, storm impacts, and to restore service faster after outages, it is necessary to make the grid smarter and technologically advanced. Smart grid helps provide more reliable power, generating efficient renewable power, using a mix of energy sources, working with smart devices and smart homes, reducing carbon print, and encouraging the use of electric vehicles. 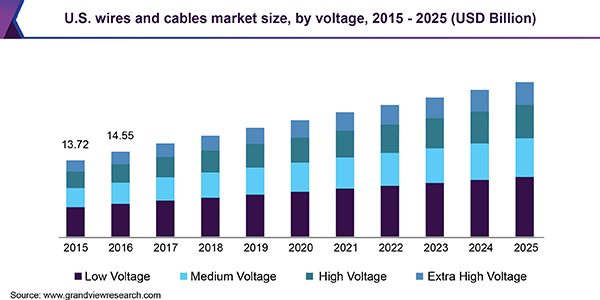 Increased energy needs in the Asia Pacific, Middle East, and South America have resulted in rising investments in smart grids in these regions, further driving the demand for low voltage cables. Growth in the power distribution sector, power generation from renewable energy sources, and demand from the automotive and non-automotive industries are the other factors projected to positively influence the demand for low voltage cables.

Urbanization is one of the major reasons for the overall growth of the wires and cables market. The need for power grid interconnections in densely populated areas is creating a demand for submarine and underground cables. The underground cables reduce space required and offer reliable transmission of electricity. Environmental regulations that observe the impact of electrical cables on the environment, the safety of electrical installations, implications for the health of the materials used for cable manufacturing have led to various innovations and new product development. These regulations have encouraged the introduction of new products such as halogen-free flame retardant compounds and implement new processes with low energy consumption and efficient use of raw materials.

The low voltage held the largest market share in 2018 owing to the high in the distribution networks, LAN cables, building wires, appliance wires, and others. These wires and cables support smart grids to deliver a good quality of electricity supplies and offer an improved provision of electricity for end consumers. The energy and power sector across the world is experiencing rapid changes. Most of the developing and developed countries are experiencing heavy demand for electricity and are moving towards the incorporation of large-scale renewable resources.

The high voltage wires and cables are used for the transmission of electricity from 1,000 volts. These cables are coated with paper and oil, to avoid direct contact of the cables with an individual or any other material. The quality of high voltage cables depends upon the insulation material type used. High demand for these cables from the end-users such as telecom, power distribution, oil and gas, and aerospace and defense is expected to be the major factor responsible for the growth of the high voltage cable market over the forecast period.

The underground installation segment is expected to expand at the highest CAGR over the forecast period. The underground cables installation incurs fewer transmission losses, lowers the maintenance costs, and thus, easily absorbs the power loads. They release no electric fields, hence, many countries are adopting these installations. Demand from various sectors such as residential, commercial, telecom, automotive, energy, and power industries are leading to expansion and up-gradation of infrastructure which in turn is anticipated to drive the overall market. Developing countries such as China, India, and Vietnam are spending a significant portion of their GDP on infrastructure development.

The energy and power segment held the largest market share in 2018. Several technological upgrades such as shifting the old transmission lines to high or extra high voltage lines to avoid the transmission losses are been made in the electricity T&D ecosystem. These changes aim at making the ecosystem's stable in contradiction of the alternating nature of renewable sources of energy. Moreover, the introduction of new methodologies such as synchronized charging of electric vehicles and net metering for solar homes have aggressively affected the utility sector. However, this growing renewable power capacity and energy generation have further augmented the need for countries to interrelate their transmission systems. This link-up is expected to balance the power generation and demand through the export and import of electricity. With an increase in renewable energy generation, the electricity trade is expected to increase resulting in the construction of higher capacity interconnection lines significantly driving the market. 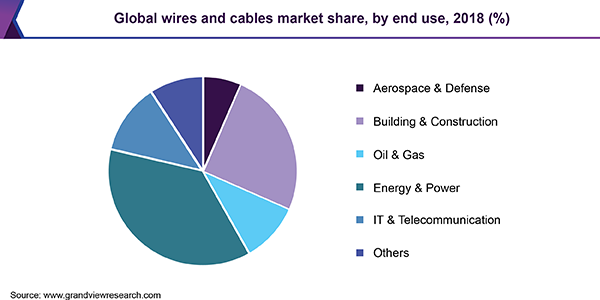 Building and construction segment is expected to expand at the highest CAGR of 5.5% over the forecast period. However, new construction and refurbishment in aging residential, commercial, and industrial buildings in different regions of the world. Developing countries in South America, Middle East, and Africa, and the Asia Pacific are undertaking new construction infrastructures such as rail tunneling, rail signaling, and a corresponding expansion in power generation and distribution are driving the market.

North America is anticipated to register a stable demand for wires and cables over the forecast period. However, Europe is expected to witness growth owing to the initiatives such as Digital Agendas for Europe 2025. North America has witnessed a vast increase in data consumption which has resulted in investments by companies such as AT&T and Verizon in fiber networks. For instance, in May 2017, Verizon Communications signed an agreement with the Prysmian Group to upgrade the network architecture with fiber platform aiming to increase the 4G coverage and arranging the fundamentals for the consequent expansion of 5G and IoT technologies. Thus, these significant investments in the IT and Telecommunications sector are expected to drive the overall market.

The market in the APAC region is anticipated to expand at the highest CAGR of 5.2% over the forecast period. Growing demand for light, power, and communication is anticipated to fuel the expansion. The government initiatives such as “Make in India”, and “Go Green” policy are expected to drive the market in India. According to the Indian Electrical Equipment Industry Mission Plan 2012-2022, the government of India has planned to make the country one of the electrical equipment producers and obtain productivity of USD 100 billion by matching the exports and imports, hence, driving the demand for cables over the period 2012-2022.

Mergers and acquisitions and partnerships have positively impacted the growth and are significantly driving the overall market share of key players. For instance, in August 2016, Nexans and American Superconductor Corporation (AMSC) entered into a partnership to market and sold AMSC’s Resilient Electric Grid (REG) system. The partnership involves AMSC and Nexans to collaborate and deliver products and solutions to electric utility customers in the U.S. and Canada. Also, in June 2016, Nexans signed a framework agreement with Energinet.dk, a Danish Transmission System Operator (TSO). The agreement was to deliver 500 km of high voltage (HV) cables, and the contract is worth more than 20 billion euros.

This report forecasts revenue growth at global, regional, and country levels and provides an analysis of the latest industry trends in each of the sub-segments from 2015 to 2025. For this study, Grand View Research has segmented the global wires and cables market report by voltage, installation, end-user, and region: