The Europe 40-foot platform wagons market size was valued at USD 598.5 million in 2020 and is expected to expand at a compound annual growth rate (CAGR) of 4.7% from 2021 to 2028. The outbreak of the COVID-19 pandemic has taken a severe toll on several industries across Europe. Moreover, the subsequent restrictions and resultant supply chain disruptions had a deeper impact on the production of freight wagons. As such, government schemes aimed at mitigating the impact of the pandemic on various sections of the economy, including rail freight transport, are expected to drive the growth of the market over the forecast period. 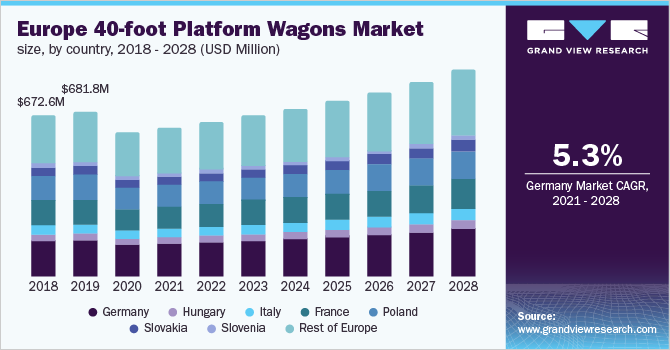 Freight transportation holds a higher weightage in the overall economy of the EU and contributes significantly to the competitiveness of various industries and services. The growing demand for mobility in Europe has created a need for a well-integrated and efficient railway system capable of addressing all the logistical, technical, and environmental constraints and ensuring sustainable growth of the enlarged European Union. In December 2020, the European Rail Research Advisory Council (ERRAC) proposed to double the rail passenger capacity and triple the rail freight capacity in the region. In the wake of this target, the InteGRail project envisages enhancing railway performance, leveraging better cooperation and information exchange between different subsystems, and subsequently encouraging global system-level optimization.

The growing demand for enhanced engine performance and fuel efficiency is predominantly driving the growth of the market. Fuel efficiency is emerging as a major concern for both transportation service providers and end-users amid the rising fuel prices, which show no signs of abating. As a result, locomotive manufacturers are under severe pressure to manufacture engines that can potentially meet the changing requirements and simultaneously enhance performance and deliver fuel efficiency. At this juncture, turbocharged locomotives are considered one of the latest innovations in the industry. They offer advantages such as increased air intake in the combustion chamber, enhanced engine performance, and reuse of exhaust air. Turbochargers typically work at their best at high engine speeds. Besides, they do not require any power source to operate.

The electrification of main lines is gaining traction in European nations such as the U.K. and Germany, where intensive electrification programs are being pursued to improve line capacity and offer better services to rail operators while mitigating the environmental impact. At the same time, several research projects to investigate the potential use of dual-mode or hybrid propulsion systems for low-density lines are being undertaken as part of the efforts to reduce the scope of diesel engines. For instance, in September 2018, Stadler Rail, a rail manufacturer based in Switzerland, placed an order worth USD 100 million with ABB Ltd., a provider of power and automation technology solutions. The order was for the supply of advanced technology-based traction equipment for over 160 trains operating on urban, regional, and long-distance routes in the U.S. and Europe. All these advancements are bringing innovation into transportation, which is likely to shift the demand toward public transportation and, subsequently, increase the demand for platform wagons.

The building overcapacity in the rolling stock industry is emerging as one of the major market restraints. The rapid increase in production capacity but moderate growth of the rolling stock market resulted in manufacturing overcapacity. The plummeting demand has taken a severe toll on the profitability of the market players, thereby prompting companies such as BEACON RAIL, LOTOS Kolej Sp. z o.o., and DB Cargo to offer low-cost rail vehicles as part of the efforts to strengthen their position in the Europe 40-foot platform wagons market. Companies are adopting various strategic initiatives, such as pursuing mergers and acquisitions and winning new contracts, to compete with their peers in the market. In March 2019, logistics freight operator, PKP CARGO, signed an agreement worth USD 95.1 million with Tatravagónka, a freight railway wagon manufacturer, to procure 936 flat cars. The agreement envisaged Tatravagónka delivering 400 cars in 2020, followed by 298 cars in 2021, and the rest 188 flat cars by the end of 2022. The first 50 Tatravagónka freight cars were delivered at the end of 2019.

Europe has witnessed rapid expansion in industrial activities in recent years. Manufacturing units and incumbents of various industries are demanding efficient and reliable transportation networks to effectively transport raw materials and finished goods. Rail transportation has emerged as a cost-effective and reliable mode of freight transportation compared to road transportation. Over 1.31 trillion tonne-kilometers of cargo were transported on railways in Europe in 2019. The use of rail freight wagons in the mining and metal industry is widespread in Europe. Hence, any potential growth in the mining and metal industry is expected to drive the volume of minerals and metals transported on freight wagons, thereby driving the demand for rail freight wagons in the region.

The German market accounted for a major revenue share of around 20% in 2020. The rolling stock industry has continued to expand in Germany with the presence of numerous new rolling stock manufacturers in recent years. Market players are engaged in the development of freight technologies and the adoption of energy-efficient transportation solutions. Furthermore, the proliferation of the e-commerce industry has resulted in a shift in the shippers’ demand to support omnichannel approaches. The industry is primarily focused on agility and speed in a multifaceted supply chain network with reduced time for consolidations and delivery optimization. This, in turn, has led rail freight operators to redesign their supply chain networks to accommodate customer demands, thus driving the demand for platform wagons. 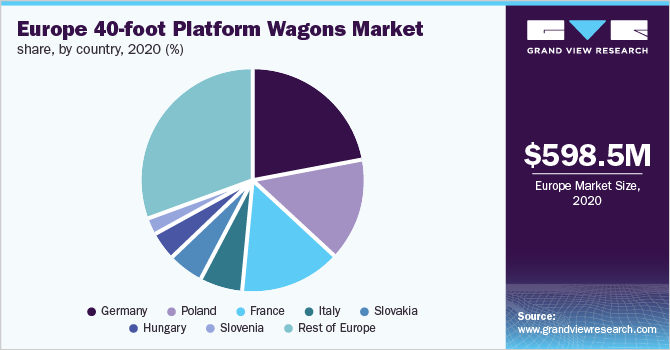 In Hungary, rapid investments in the modernizing and repairing activities of wagons, along with the growth of intermodal services, are likely to accelerate the demand for rail freight wagons. The Hungarian government is increasingly supporting the capacity expansion of rail freights, the development of bridges in Budapest to expand rail connectivity, and future investment plans such as the Budapest-Belgrade railway line. Such initiatives are expected to propel the demand for freight wagons in the country. For instance, in 2020, the Hungarian government adopted the National Energy and Climate Strategy with an aim to focus on a carbon-neutral economy. The strategy focuses on investments in the development of rail freight wagons, enabling intermodal transportation options supported by the Budapest Suburban Railway Strategy (2021).

Key players operating in the market include AstraRail Industries S.A.; ELH Waggonbau Niesky GmbH; NYMWAG CS; TMH International; and United Wagon Company. In an attempt to acquire new products and increase market share, market players are aggressively investing in research and development activities, improving their internal processes, enhancing their existing products, and actively engaging in new product developments. Companies are also focusing on mergers and acquisitions and strategic partnerships to develop technologically advanced products and gain a competitive edge in the market. For instance, in October 2018, VTG AKTIENGESELLSCHAFT acquired CIT Rail Holdings and its wagon leasing company, NACCO Group, to boost VTG AKTIENGESELLSCHAFT’s rail car fleet. This acquisition was intended to add more than 11,000 rail cars to the company’s existing 83,000-unit portfolio, strengthening its presence across major EU markets such as the U.K., Italy, France, Austria, Scandinavia, Netherlands, and Eastern Europe. Moreover, in May 2020, PKP CARGO bagged a loan agreement approval of USD 70.7 million from the European Investment Bank for modernizing its rolling stock modernization project. The loan allowed the company to finance and refinance its development plan with an available investment of USD 235.9 million. Some of the prominent players in the Europe 40-foot platform wagons market are:

This report forecasts revenue growth at the regional and country levels and provides an analysis of the latest industry trends in each of the sub-segments from 2018 to 2028. For this study, Grand View Research has segmented the Europe 40-foot platform wagons market report based on country:

What is the Europe 40-foot platform wagons market growth?

How big is the Europe 40-foot platform wagons market?

b. Germany held the largest share of over 20% in 2020 and is expected to dominate the Europe 40-foot platform wagons market. The rolling stock industry has continued to expand in Germany with the presence of numerous new rolling stock manufacturers in recent years. Market players are engaged in the development of freight technologies and the adoption of energy-efficient transportation solutions.

Who are the key players in the Europe 40-foot platform wagons market?

What are the factors driving the Europe 40-foot platform wagons market?