The Europe brewer’s spent yeast market size was valued at USD 618.3 thousand in 2020 and is expected to expand at a compound annual growth rate (CAGR) of 11.5% from 2021 to 2028. Increasing demand for Brewer’s Spent Yeast (BSY) in the application for feed and food supplement applications is expected to drive the market growth during the forecast period. Due to the presence of numerous beer-producing companies in the region, there is a huge production capacity for brewer by-products such as Brewer’s Spent Grains (BSG) and BSY in Europe. With the recent advancements in the extraction of food-grade BSY, the market is expected to expand at a strong growth rate during the forecast period. 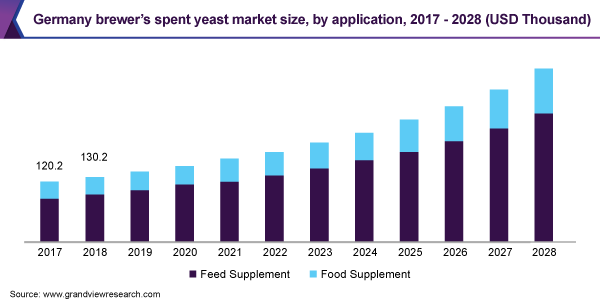 Germany was the largest European country market and was valued at USD 153.37 thousand in 2020. The presence of the robust food industry with companies taking up initiatives to adopt newer and sustainable sources of materials is expected to drive the demand for brewer by-products such as BSG and BSY in the forecast period. The U.K. is another major European country having a consumption volume of more than 11 kilotons in 2020 which is expected to grow more than two-fold by 2028 expanding at a high CAGR during the projected period.

The brewer’s spent yeast is an abundant source of protein, vitamin, mainly vitamin B complex, as well as other ingredients such as beta-glucans, mono, and oligosaccharides that have a high value in the nutraceutical industry. The highly nutritious functionalities of the product and its applicability majorly in the feed industry are anticipated to continue driving its demand in the region during the forecast period.

Rising investments in R&D by the food supplement companies along with the rising popularity of brewer’s spent yeast in the food industry is expected to solidify growth prospects for the market in the forthcoming years. The market is highly fragmented with the presence of regional and international companies having contracts with local supplement producers.

Most of the players in the animal breeding sector have traditionally used liquid yeast as a feed supplement to achieve better meat quality and better milk production in the dairy application. The utilization of agro-industrial by-products is economically more viable than conventional feedstuff, as the latter are more expensive. However, liquid brewer’s spent yeast feedstock concentrates are relatively expensive compared to dried yeast, as they contain more protein sources than the latter.

In addition, escalating concerns regarding the rising cost of imported feed ingredients, such as soybean meal and maize grain, which cause the cost of production to rise, are expected to drive the demand for liquid brewer’s yeast and other agro-industrial by-products.

Dry yeast is a completely natural product, which is widely used as an animal feed supplement for poultry, horses, pigs, and ruminants. The extracts derived from dry yeast, such as beta-glucans, are being increasingly used in numerous functional food applications. Additionally, dried yeast is claimed to be more stable than liquid yeast, therefore, the segment is expected to witness steady growth over the forecast period due to the advantages in storage and transport.

The feed supplement application segment led the market and accounted for more than 73% share of the total revenue in 2020. The addition of BSY to the diet of animals has a positive impact on the overall quality of meat. The meat performance indicators including fat thickness, muscle dimension, growth rate, daily gains, and body weight were seen to have been impacted positively. Humoral immunity indicators such as gamma globulin, ceruloplasmin, and lysozyme also register an increase due to the incorporation of BSY.

BSY is also being used as aqua feed and is seen as a potential replacement for fishmeal as a part of animal feed in aquaculture. BSY is claimed to be a viable alternative for currently used aquafeed as it is nutrient-dense, low cost, and available in plentiful amounts. BSY used for aquaculture applications first undergoes enhanced drying and hydrolysis as a pre-treatment to increase digestibility. The resultant product has a higher intestinal absorption rate and makes for a suitable fishmeal alternative.

BSY has recently witnessed aggressive growth in food applications with the product being used in various forms. BSY hydrolysates are known to add antioxidant properties to nutraceutical or food ingredients. These ingredients, for instance, can prevent the damage caused by free radicals present on lipid cell membranes.

Brewer’s spent yeast extracts are observed to have high levels of flavonoids and polyphenols. Therefore, they can be used in industrial applications for nutraceuticals and food products. Yeast-particularly BSY-has high RNA content, making it a good source of nucleotides, which are used as flavor enhancers in the food industry. The numerous applications of BSY in the food industry are expected to further drive the growth of the application over the forecast period.

Germany dominated the market and accounted for over 26% share of the total revenue in 2020. The dominance of Germany is attributed to the abundant availability of high-quality raw materials. The country has a robust food industry due to high product quality that has attracted global as well as domestic demand. The brewing industry is the fifth-largest sector of the food and beverages industry, with breweries providing BSY for animal feed for a long time. 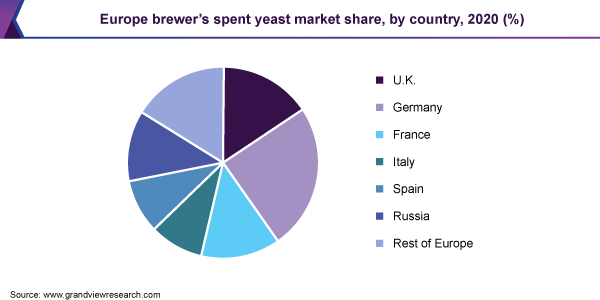 In 2020, the U.K. has the second-highest share, due to innovations in the food industry and the presence of numerous global players such as Associated British Foods plc. Many consumers in the U.K. are increasingly opting for a vegan lifestyle and are conscious regarding the food labels. Brewer’s spent yeast can be used under clean labels and is classified as an organic product as it is not synthesized but is a result of the fermentation of malt in breweries. This makes it an ideal choice as an ingredient in supplements as well as in the form of additives. Therefore, the demand for food products consisting of BSY has been driving the demand for the product in the U.K. and is expected to continue showing a similar trend over the forecast period.

Some of the key players in the market are Associated British Food plc; Lesaffre; Alltech; Leiber GmbH; Cargill, Incorporated; AngelYeast Co., Ltd.; Lallemand Inc.; Nutreco N.V.; Biomin; ADM; and KORMAPROM. This has been a budding yet niche market. However, increasing innovations in the field are expected to result in increased demand for the product. For instance, FUMI, a Dutch start-up has developed an alternative for egg white using brewer’s spent yeast for the rising demand for vegan and non-GMO food. The product can be used as an emulsifier, binding, and foaming agent.

Several privately held companies, such as KORMAPROM, are mainly focused on the production of brewer’s spent yeast, whereas big players, such as Cargill, Inc. and ADM, have an extensive portfolio of products containing brewer’s spent yeast. As the incorporation of yeast in commercial products is an expensive process, the market is majorly dominated by large companies with substantial capital and resources. Some of the prominent players in operating in the Europe brewer’s spent yeast market are:

This report forecasts revenue growth at the regional and country levels and provides an analysis of the latest industry trends and opportunities in each of the sub-segments from 2017 to 2028. For this study, Grand View Research has segmented the Europe brewer’s spent yeast market report based on type, application, and region:

b. The feed supplement application segment led the Europe brewerâ€™s spent yeast market and accounted for more than 73% share of the total revenue in 2020.

b. Germany dominated the Europe brewerâ€™s spent yeast market and accounted for over 26% share of the total revenue in 2020.

How big is the Europe brewerâ€™s spent yeast market?

What is the Europe brewerâ€™s spent yeast market growth?

b. The liquid type segment led the Europe brewerâ€™s spent yeast market with a revenue share of more than 70% in 2020.

Who are the key players in the Europe brewerâ€™s spent yeast market?

What are the key factors driving the Europe brewerâ€™s spent yeast market?

b. The key factors driving the market include expanding the size of the health-conscious consumer base and increasing demand of brewerâ€™s spent yeast-based products from vegan consumers for their protein content.