The global brewer’s yeast market size was estimated at USD 2.81 billion in 2017. Rising demand for products such as dairy, meat, and eggs has spurred demand for animal feed production, globally. This factor is expected to augment demand for brewer’s yeast over the forecast period.

Saccharomyces cerevisiae, commonly known as baker’s yeast, has been instrumental to winemaking, baking, and brewing. Brewer’s yeast, which is the leftover product after brewing operations, is used as feedstuff for poultry, ruminants, fish, and pigs as a flavoring agent in the food sector. Brewers’ yeast, which is more commonly extracted from large breweries, is being used as a protein supplement in animal feed. Inactivated form of this product is a highly valuable source of protein, phosphorous, and vitamin B. 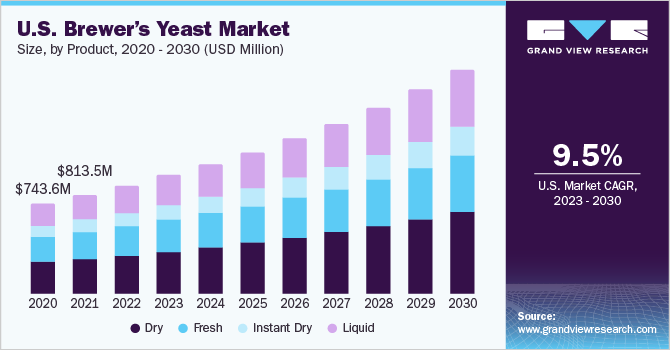 Asia Pacific is projected to witness the fastest growth throughout the estimated period owing to a flourishing animal feed sector, especially in Japan, India, and China. This can also be attributed to rising requirement for yeast-infused diets to facilitate the poultry, pork, and sea food industry.

On the basis of type, the industry is segmented into dry and liquid yeast. The dry segment held a share of 56.0% based on revenue in 2017. Using agro-industrial by-products is more economically viable than conventional feedstuffs, as the latter are more expensive.

Liquid yeast contains enzymatically digested yeast for better digestion. Several farmers in Thailand are approaching beer manufacturers to obtain the liquid product form for feedstuffs for their cattle. Increasing concerns regarding growing prices of imported feed ingredients, such as maize grain and soybean meal, have caused the cost of production to rise. This is expected to drive demand for liquid yeast and other agro-industrial by-products. However, liquid feedstuff concentrates are expensive, as they contain more protein sources than the dried form.

Feed supplements and food supplements are the key application areas in the brewer’s yeast market. In 2017, the feed supplements segment dominated the industry and held a share of around 60.6% of the global volume. Feed supplements induced with the product leads to enhanced productivity in terms of higher meat production, increased milk, and greater reproductive efficiency in ruminant animal species. A growing feed supplement industry is projected to create new avenues for product manufacturers.

Rising consumer awareness regarding healthier diets and calorie reduction in major markets such as U.S., Europe, and China is expected to promote consumption of health supplements over the coming years. This will also drive demand for brewer’s yeast. Increasing awareness regarding the importance of appropriate protein intake is expected to remain a driving force over the forecast period. 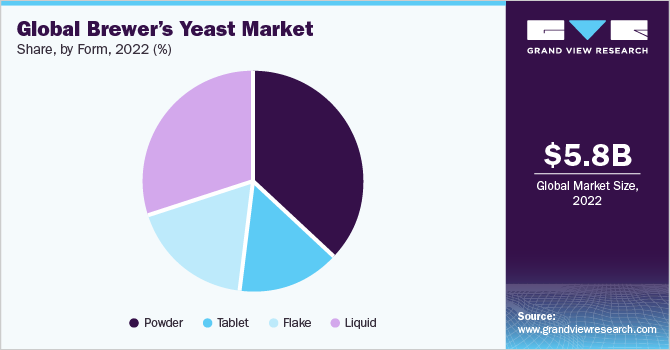 Rising importance of e-commerce portals as a selling medium for nutraceutical manufacturers is expected to open new industry avenues for market players. The U.S. FDA imposed numerous regulations intended for labeling of food supplements. This comes in light of increasing incidence of violations of label standards as well as product quality. As a result, food supplement manufacturers are expected to up expenditure on development of goods with better quality over the forecast years.

Demand for brewer’s yeast in North America accounted for a market share of over 36.0% in 2017 and is expected to witness substantial growth over the forecast period. U.S. is one of the major markets for the product, owing to high animal feed production in the country. A holistic approach by producers to inculcate the product in feeds is likely to propel market demand, citing increasing end consumer’s safe and healthy meat product requirements over the coming years.

Europe accounted for a share of 20.7% in terms of volume in 2017. Spain, Germany, and France are major markets in this region on account of high animal feed production. Rapidly growing feed production in Russia, Turkey, Belarus, Poland, Greece, and Ukraine is expected to propel product demand in the region over the forecast period.

The market in Asia Pacific is poised to witness substantial growth over the forecast period, registering a CAGR of 8.5% in terms of volume. The animal feed segment, specifically, is expected to develop a potential demand base in the region on account of rising requirement for yeast-infused diets to facilitate the poultry, pork, and sea food industry.

In China, demand for poultry and other meat products is on a rise owing to growing population, increasing urbanization, and surging requirements of export markets. One of the significant factors behind the presently scaling demand for brewer’s yeast as a feed additive is the need to ensure maximum productivity of poultry to cater to increasing consumption across major demand centers, globally.

The industry is significantly competitive with organizations undertaking several strategic activities, including regular mergers, acquisitions, capital expansions, and strategic alliances. Established players are concentrating on expanding their share in the overall industry, along with a focus on improving productivity through technological innovation. The market is dependent upon raw material suppliers and manufacturers, which is primarily concentrated in U.S., China, India, and Brazil.

Organizations are concentrating on ideal business development by actualizing different development techniques. They are framing strategic alliances with strong players of specific province and sharing innovative expertise in food and feed supplements. Some of the key companies present are Nutreco N.V., Cargill, Incorporated, Lesaffre Group, and Archer Daniels Midland Company.

Nutreco N.V. attained the topmost market position in 2017, followed by Cargill, Incorporated, Lesaffre Group, Archer Daniels Midland Company, and Associated British Food Plc. These manufacturers have a firm foothold in the market, with the capability of catering to the local as well as international market. These companies have a broad clientele base within their country of origin as well as in other countries.

This report forecasts revenue growth at global, regional, and country levels and provides an analysis of the latest industry trends in each of the sub-segments from 2013 to 2025. For the purpose of this study, Grand View Research has segmented the global brewer’s yeast market report on the basis of type, application, and region: