The Europe industrial water treatment chemicals market size was valued at USD 2.93 billion in 2018 and is expected to register a CAGR of 3.6% from 2019 to 2025. The rising use of these chemicals owing to the increased awareness about water pollution and the pressing need to recycle wastewater to reduce reliance on the shrinking sources of freshwater is expected to drive market growth over the forecast period. Europe is one of the prominent consumers of industrial chemicals owing to the large consumption of water in industries such as sugar & ethanol and petrochemicals. Some of the most commonly used varieties of industrial chemicals for water treatment in Europe are corrosion inhibitors, solvents, coagulants & flocculants, and antiscalants.

In the U.K., boilers emerged as the dominant application segment in 2018 and accounted for 36.2% of the revenue share. The high level of industrialization achieved by the nation has resulted in a substantial demand for industrial water treatment chemicals across boiler applications in industries such as chemicals, food processing, textiles, paper and pulp, and fertilizers. The boiler application is likely to witness promising growth prospects over the forecast period as well, in the U.K. as well as the overall Europe market. 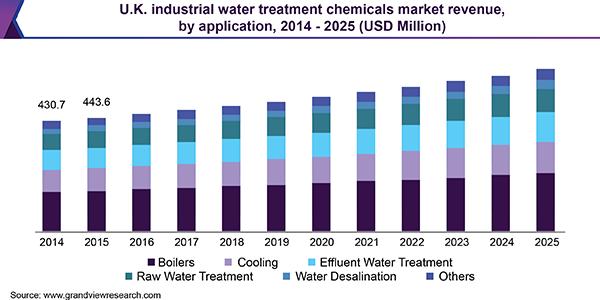 However, the growth of the market is likely to be hampered by factors such as high production and investment costs and the harmful effects of chemicals on the environment when not disposed of properly. The rising popularity of electrocoagulation (EC) and biofiltration technologies, owing to their environment-friendly nature, is also likely to hamper the demand for chemicals for the treatment of industrial water in the region. Rising awareness about the need to reduce greenhouse emissions in manufacturing sectors for industries to be able to adhere to stringent emission regulations is expected to promote the usage of microbes in the biological treatment of industrial water. Biological treatment is now being used in Europe for the removal of phosphorus and nitrogen from industrial water as a greener option to chemical treatment.

Nevertheless, regulations developed by organizations such as the European Industrial Emission Directive (IED), which are responsible for regulating the emission of pollutants from industrial installations, play a notable role in the development of the market. The rising number of regulations in several European countries overlooking the proper treatment of industrial water before it is disposed of is expected to drive the European industrial water treatment chemicals market over the forecast period. For instance, several regulations have been developed in Italy concerning the emission of pollutants and the discharge of sludge in water bodies.

In terms of application, the boilers segment accounted for the largest revenue share of over 34.3% of the Europe industrial water treatment chemicals marketin 2018 and is expected to retain its dominance over the forecast period. The demand for boiler water treatment chemicals is expected to gain momentum owing to their ability to safeguard boiler components and piping from potential damage from contaminants like suspended solids, organic materials, and dissolved solids in the boiler water. The cooling segment accounted for the second-largest share of nearly 19.3% of the total revenue share in 2018. These chemicals are used to prevent the damage of cooling tower components, which results from contaminants in feed water, circulation water, and/or blowdown water. Oxidizing and non-oxidizing biocides are also used for the treatment of cooling water to control the presence of bacteria. 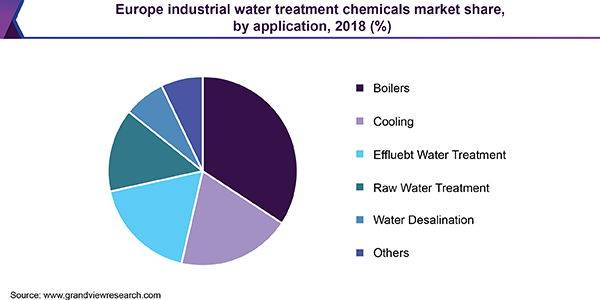 The effluent water treatment segment is expected to witness the fastest growth over the forecast period. The segment is expected to grow in response to the reducing utilization of potable or freshwater in several industries. The treatment is used to safeguard the environment against pollution and contributes toward sustainable development. Water desalination systems are gaining higher significance owing to the scarcity of freshwater. In desalination plants, excess salts and other minerals are removed from the water through membrane-based or thermal-based technologies, thereby rendering it fit for industrial consumption. Reverse osmosis (RO) and distillation are used for seawater desalination while electro-dialysis and RO are used to desalt brackish water.

Germany emerged as the dominant regional market in 2018 and accounted for 20.2% of the overall industry revenue. The chemical industry in the country is continuously offering innovative solutions for wastewater treatment for both municipal and industrial processes through the development of new materials, process techniques, and chemicals. The U.K. market accounted for the second-largest share of nearly 16.0% of the overall market in 2018. This can be attributed to the rising investment in industrial and residential wastewater treatment applications and increasing government initiatives aimed at effective reuse and treatment of industrial water. The U.K. has around 7000 sewage treatment plants across the nation.

The market in France is expected to witness substantial growth over the forecast period owing to the increasing focus of municipalities on industrial waste treatment and strict rules regarding industrial emissions and discharge. Water treatment is carried out on a large scale in France as around 6300 water treatment plants are operated with the intervention of private companies. The market in Italy is expected to witness the fastest growth rate over the forecast period. The growing awareness about water reuse initiatives could drive the adoption of wastewater polishing technologies in the country.

Key vendors in the market supply their products to several industries such as power generation, chemical, oil & gas, food & beverage, and pulp & paper. Key end-use companies of the European market include EMWG S.r.l., Sterling & Wilson Pvt. Ltd., and MECO INCORPORATED.  Several key manufacturers operating in the region are well-established with a strong foothold in the market.

Players such as Kemira Oyj, BASF SE, Ecolab, Inc., and Solvay S.A. focus on backward integration to stay ahead of the competition. All of these companies act as raw material suppliers as well as the manufacturers of water treatment chemicals. In January 2019, BASF and Solenis merged their paper and water chemical businesses. It was aimed at adding value to their offerings and is anticipated to boost the sales of the company’s process chemicals.

This report forecasts revenue growth at regional & country levels and provides an analysis on the latest industry trends in each of the sub-segments from 2014 to 2025. For the purpose of this study, Grand View Research has segmented the Europe industrial water treatment chemicals market report on the basis of application and region: